With every piece of news on Sunday—from the Pittsburgh Steelers refusing to come out for the national anthem to LeSean McCoy saying President Donald Trump is “acting like a jerk” to the dozens of other players and coaches who made pointed comments toward the White House—I kept coming back to a conversation I had with Pete Fox, my partner in crime from our old radio show on CBS and now the Host of his own show on NBC Sports in Los Angeles.

We were discussing so-called “distraction” culture, the fortress that NFL coaches had built up over the past 80 years to make sure that real life never seeps into the sport. Football coaches, historically, hate real life. They like third-down efficiency, pass protection, and the field goal unit being set with plenty of time left on the play clock. They don’t like outspokenness, typically. If you are not playing or preparing to play football, you run the risk of being a distraction—a word that has come to signify anything that football coaches do not like. Real life, however, is a distraction. Alabama head coach Nick Saban claimed to not know that it was Election Day … on Election Day, and he acted like this sort of single-minded focus was something to brag about. Individuals exist in real life, but individualism has been shunned in football circles.

In April, Pete, who also works in the press box for the new L.A. Rams on gameday, told me that the way to break down distraction culture and for political activism to take root in football is through “power in numbers.”

“It’s only a ‘distraction’ when one or two guys are speaking out. When suddenly you have a whole team of guys or a majority of a team speaking on one issue, it’s no longer a distraction: It’s a priority for that team. “Any one person can be cut but when it’s a collective thing, it’s very hard to single people out. A whole team’s voice, and now a league, becomes amplified because you have more voices and they are spread across the country in different cities. It also gets a little more protection for guys who want to get involved but don’t know how and are a little bit afraid of their job security.”

On Friday, Trump did the work for them by referring to any NFL player who protested as a “son of bitch” who should be “fired”—and then doubling and tripling down on his stance. There is power in numbers for politically active players, and after this weekend, no one is going to be afraid for their job security. The sport, and the conversation around politics and sports, has changed. 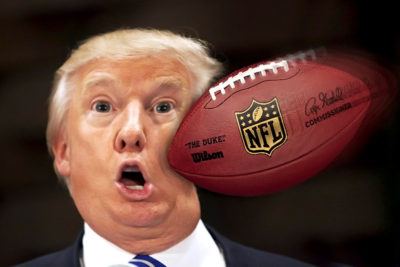 We will look back on Sunday as the beginning of the end of an era when football teams did whatever they could to keep real life out of football. The NFL changed Sunday, perhaps permanently, perhaps just for the next few years, but it changed. It is not just that the president of the United States is in a war of words with the national pastime—watching football is essentially the only thing Americans do in large numbers anymore—and went so far as to call for a fan boycott. Trump’s comments so stunned the football world that the risk-averse sport came out en masse against him. Earlier this month, Dolphins receiver Kenny Stills wondered why more players weren’t speaking out against police brutality, theorizing that perhaps endorsements or contracts were holding them back. That will no longer be the case.

The list of NFL people who came after Trump is both long and unexpected. Terry Bradshaw, of all people, owned Trump by telling him to stick to politics. Tennessee head coach Mike Mularkey and New Orleans head coach Sean Payton both ripped Trump. Mike Mularkey & Roger Goodell, who both released a vague statement Saturday, were celebrated. MSNBC host Joy Reid framed Goodell’s statement as “claps back at Trump.” I did not know what to expect when this weekend started, but I definitely did not anticipate Goodell being accepted by The Resistance. The majority of owners then supported Goodell’s statement, ending up looking like the good guys. After a series of self-inflicted wounds in courtrooms across America with player discipline and health, the NFL league office is finally going into a battle and will come out with a positive image. Trump did something so outrageous that it united the vast majority of players, owners, coaches, and the commissioner. We are living in strange days.