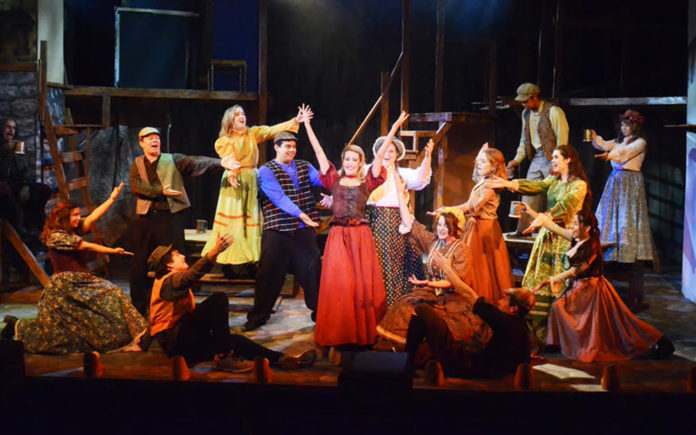 “Please sir, I want some more,” is one of the most iconic lines to ever jump from the page.  Oliver, a Tony Award winning musical with music and lyrics by Lionel Bart, based on Charles Dickens’ classic novel, Oliver Twist, is a dramatic tale that reflects the dark underbelly of nineteenth century Victorian era London.  Young eleven-year-old Oliver’s plea for another helping of food symbolizes the poverty stricken masses and their effort to want more in their lives, than the starvation diet of ‘gruel’ that they are fed. 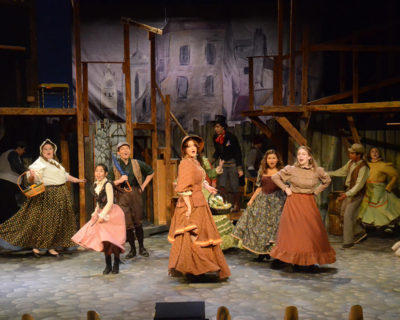 ‘Oliver,’ featuring the adorable Fabrizio Ibanez in the title role, promises to be yet another feather in the cap for Palm Canyon Theatre. This class act production tells the story of a half-starved boy doomed to a life in a workhouse, who dares to ask for more and thereby opens the door to so many new experiences. After being sold to an undertaker as punishment for his boldness, Oliver runs away and hooks up with a band of juvenile thieves. He meets up with the memorable Artful Dodger, portrayed by charismatic Jake Mule and the almost kind Fagin, personified by veteran actor Tom Warrick, the adult leader of the band of pickpockets, who offers Oliver the first bit of kindness that the boy has ever known.  Mule and Warrick are both riveting in their roles. 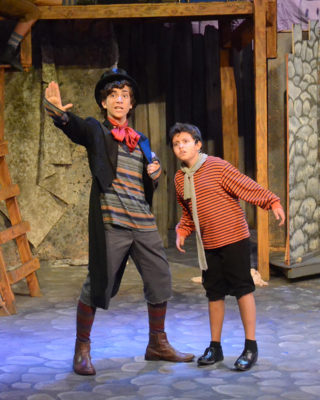 Fortunately Oliver’s life as a pickpocket is short lived when he is arrested on his first day out.  Afraid that Oliver will rat them out, the cruel and abusive Bill Sikes, (Sam Schwartz) who portrays the villain perfectly, forces his wife, Nancy, (Johnelle Walker,) to go after the boy and bring him back.  Walker’s rendition of “As long as he needs me,” is breathtaking and stunning, though the intent is unnerving.  A woman singing about her unyielding love for a man who abuses her is not a lesson to teach children and certainly should never be viewed as an acceptable norm in any story, however the endearing and tragic lives of these characters are an authentic presentation of the world Dickens creates in his tale.

During his brief reprieve from the pauper’s life, Oliver meets up with Mr. Brownlow, (Peter Nicholson,) a wealthy, elderly man whose pocket Oliver had tried to pick, but rather than prosecution, he takes the boy in and offers kindness.

Happiness is a fleeting emotion for young Oliver and he is unwillingly dragged back onto the dirty streets.

Oliver is not necessarily the uplifting, everyone lives happily-ever-after story of good triumphing over evil.  Sometimes, evil wins in the world of drama. It’s a story filled with darkness, treachery and domestic violence. Yet despite the tragedy of some elements of the plot, it is a story of perseverance, survival and hope. 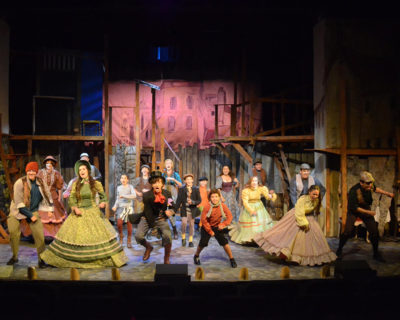 SE Layne’s direction and choreography is some of the best I’ve seen.  Without doubt, the dance and movement played an important supporting role in this top quality production.  It showcased not only a gifted ensemble of actors, but enhanced the raw grittiness of the story.  J.W. Layne’s set so aptly depicted the dirty London streets, workhouses and taverns that created the backdrop for this production.  And though music so often serves as a background prop, the sounds of the live musicians Jaci Davis and Steven Smith (Piano,) Dave Bronson (Drums,) Larry Holloway (Bass,) was elegant and made notable impressions on several occasions.  The music in this show is memorable and performed with a true depth of feeling.

Oliver is not the show to see for a lighthearted theatrical romp.  And though it is a show with children, I would not necessarily classify it as a show for children. It is currently in production through October 1st, at the Palm Canyon Theatre, located at 538 North Palm Canyon Drive in Palm Springs.