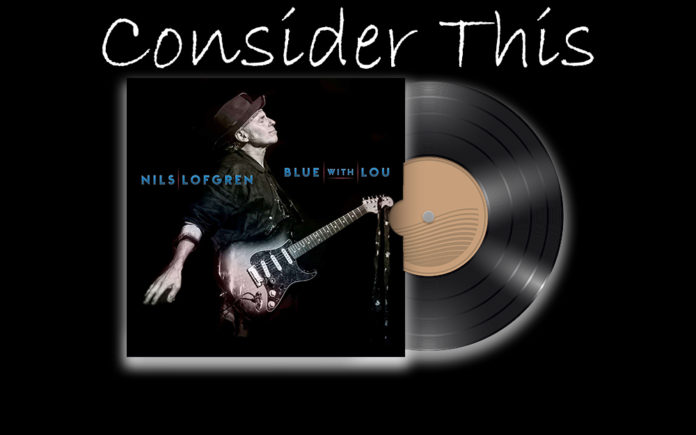 “Lou’s Walk On The Wild Side, still profound and Profane, king of that street corner, his words slash and Lick the pain.” That’s Nils Lofgren paying homage to Lou Reed on the title track of his new album, Blue With Lou.

Nils Lofgren cemented his place in the Rock N’ Roll history books when he accepted Bruce Springsteen’s invitation to join the E Street Band in 1984. As their new lead guitarist (taking the place of Steven Van Zandt, who was embarking on a solo career), he gained world-wide recognition. But to Rock fans in the know, Nils had begun making a splash in the late ‘60s.

Nils was born in Chicago in 1951 and grew up in the Washington D.C. suburb, Garrett Park, Maryland. He began studying music early on, playing Classical Accordion at age five. He switched gears from Classical and Jazz to Rock N’ Roll, swapping out accordion for piano and guitar. Early bands included Crystal Mesh, The Shot and Paul Dowell & The Dolphin. By age 17, he felt confident enough to turn pro.

After sneaking backstage at a Neil Young show, the future Godfather Of Grunge took him under his wing, inviting him to play on his After The Gold Rush album. At the same time, Nils was trying to get his own band, Grin, off the ground, raising his profile via his association with Neil, allowed him to leverage a record deal.

Throughout the early ‘70s, Nils toggled between Grin, establishing his solo career, playing with Neil on his 1975 album, Tonight’s The Night and as an intermittent member of Neil’s idiosyncratic baking band, Crazy Horse. His self-titled, solo debut, received rave reviews and featured the Stonesy single “Keith Don’t Go (Ode To A Glimmer Twin),” which received regular rotation on free-form FM radio. Several solo records followed, garnering a loyal fan base. Toward the end of the “Me Decade,” Nils connected with another legend, Lou Reed.

The pair collaborated on several songs, three of which popped up on the album Nils, while three more were featured on Lou’s The Bells. Both efforts were released in 1979. By 1984, Nils had seven solo records to his name and had recently appeared on Neil Young’s Trans album. The call came from the Boss, and he played over 150 dates worldwide on the massive Born In The U.S.A. tour. He also played on Bruce’s Tunnel Of Love album and subsequent tour.

Although Bruce Springsteen sorta went solo for most of the ‘90s, Nils remained busy, playing in Ringo Starr’s All-Star Band, writing and recording myriad solo albums, recording with Neil Young and Branford Marsalis and creating a soundtrack for the Judd Nelson movie, “Every Breath.” When the Boss reactivated the E Street Band in 1999, both Nils and Little Steven hit the road with the band and that arrangement has continued for the last 20 years.

All told, Nils has released about 23 solo albums. After Lou Reed’s untimely passing in 2013, he began to dust off the songs they had co-written that remained mostly unrecorded. During the Boss’ 2017 Australian tour, he revisited the tracks, reshaped them and wrote a few more songs. When he was satisfied, he retreated to his home studio with drummer Andy Newmark (Carly Simon, Roxy Music, John Lennon, David Gilmour) and bassist Kevin McCormack (Jackson Browne, Melissa Etheridge, Don Henley, David Crosby). The result is his 24th record, Blue With Lou.

The album kicks into gear with three killer collaborations from Nils and Lou. “Attitude City” is a sharp synthesis of streetwise swagger and tough-minded R&B. A walloping backbeat is bolstered by roiling bass, kinetic percussion, soul-shout backing vocals and shimmering guitar. The lyrics are a straight-up love letter to the city that never sleeps, depicting the good, the bad and the ugly; “There’s a presence that you sense everywhere in the street, you can’t quite put your finger on it/There’s a violence that keeps moving your feet, I know some people frown on it.” Guitars fracture and sway, ring and chime, slightly undercutting the lyrics’ menacing mien.

“Give” is a socially conscious call to arms wrapped in subterranean bass, a bone-crusher beat and stinging, serpentine guitar. Rattlesnake-shake percussion bookends mordant lyrics that encourage us to give a leg up, so to speak, to others less fortunate; “Donate half your brain to science, preserve your eyes in alcohol, keep your balls refrigerated you never know who needs It most.” No one but Lou Reed would urge half of mankind to freeze gonads for the greater good. As the tempo ratchets up, Nils revs through the bridge before unleashing an extended guitar solo that scratches, scorches, and crackles with intensity.

Conversely, “Talk Thru The Tears” executes a stylistic backflip and sticks the landing. A Doo-Wop/Blues ballad, it features Gospel-flavored backing vocals, stately piano, a rock steady beat, and King-size guitar riffs that echo Albert and B.B. Both the melody and the opening lines, “Smile, though your heart is breaking,” are a clear homage to Charlie Chaplin’s classic composition. The lyrical through-line follows suit; “People are often mistaken for objects that are just to be taken, don’t think that of yourself, don’t put yourself on a shelf, remember this rule/ Talk thru the tears, walk thru the tears, when the mad world tells you no.”

Both “Pretty Soon” and “Too Blue To Play” offer narratives from the perspective of enlisted men. The former is tethered to a galloping gait, jangly acoustic and sparkling electric riffs. Here, a newly deployed soldier reassures his sweetheart that he will be fine. At first he exhibits the brash confidence of youth; “Got this war to win, yeah, some fightin’ to do, gonna take my spoils buy blue shiny shoes and a happy suit to make you proud.” But pretty soon reality sets in; “Dear, your words been paintin’ Picassos on my soul, last night two friends died, I was there I know/Sarge was screamin’ at me, think I know what to do, take my damaged heart and run right back to you.”

The latter is a South Of The Border charmer that weds courtly Spanish guitar to a rock steady beat and simpatico backing vocals. The lyrics quietly unspool a saga of a battle-scarred Vet who has retreated from society, but manages to find love; “Sometimes lost deep in your smile girl, I simply cannot find my pain, in your anxious arms real hope burns, sure feels awful close to grace, Let’s live the hurt off until there’s not a trace.”

The remaining Nils and Lou collaborations yield some interesting surprises. “City Lights” is a more explicit Charlie Chaplin tribute, as Lou’s lyrics specifically cite the Little Tramp’s enforced exile from America back in the early 1950s… “He was banished and his humor left forever.” Lou’s spare, bare bones version appeared 40 years ago, just a couple of years after Charlie died. Nils’ arrangement locks into a jaunty, Reggae riddim that is accented by plinky-plunky guitar, airy backing vocals and breezy sax runs from Branford Marsalis. Nils’ take pushes past injustice and feels intent on celebrating the motion picture icon.

“Cut Him Up” is a prickly sonic soundscape, primitive and terse one minute, Bluesy and soulful the next. Cascading piano connects with a tick-tock beat, barbed bass lines and razor wire guitar. The lyrics limn the Brutish cosmopolis of late ‘70s New York City, when slivers of beauty still shone through the decay. “Downtown in the heart of the city, Everybody’s fine and oh-so pretty…most days I brawl, crawl and never smile, way down in the heart of the city.”

Meanwhile, “Don’t Let Your Guard Down” is pleasingly angular, anchored by tensile bass lines, slashing guitars and a pile-driving beat. Here fisticuffs provide a metaphor for the rigors of romance; “Keep your hands in front of your face, make sure your back’s straight/Keep your fists above your waist, violent love’s a required taste.”

The balance of the album is given over to heartfelt encomiums to fallen friends. The title track relies on rumbling bass lines and a locomotive beat. The stripped-down arrangement allows Nils to fully rip on guitar. Shapeshifting from sinewy riffs to gutbucket blue notes, growling power chords and rapid fire licks. The lyrics offer a sharp and succinct elegy to Lou, Punk Progenitor/Poetic Provocateur; “Sick of burying friends and Heroes, every fear I feel, gonna tango in the madness, find an Inner flame to burn or heal.” It’s a brilliant tour de force.

“Dear Heartbreaker” is a wistful ode to Tom Petty, whose sudden death continues to reverberate. Chunky guitar riffs are reinforced by serrated bass lines and a chugging rhythm. Lyrics include sly references to classic TP hits; “So the flesh and body’s gone in the wind, so it goes, still he’s not backin’ down and the music lights our souls/Oh our dear heartbreaker brother, keeps us singin’ makes us whole.”

The record closes with “Remember You,” a tender panegyric to Nils’ recently departed dog, Groucho. Soulful and elegiac, it unfolds slowly before a chugging rhythm and strumming acoustic guitar kick in. Lyrics paint a vivid portrait, familiar to anyone who knows what it means to give your whole heart to an animal; “That night you cried out in pain, limped right to my side, I took your paw in my mouth, with teeth, with all my heart, pulled that rough thorn from your body, eased your pain, spit it away/You gazed deep into me, knew forever we’d see my soul sister like no other, always there for me.” The grief is suffused with grace.

Blue With Lou is kind of a bolt out of the blue. It’s a powerful reminder of the protean talent that was Lou Reed. Happily, his work continues to resonate. Had the rest of the songs he collaborated on with Nils been released piece meal on a Lou record here or a Nils album there, the impact might have been blunted. Nils’ additional songs are equally nuanced, aided and abetted by his acrobatic guitar textures. Lou Reed may have been the catalyst for this album, but Nils Lofgren provides its heart and Soul.