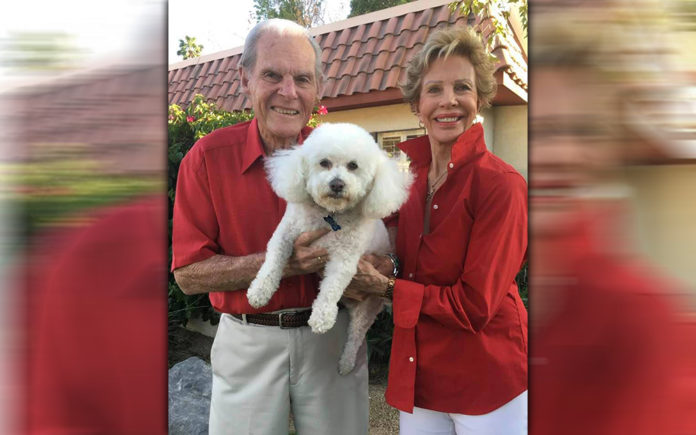 Bill and Silver Martin are a wonderful example of how mutual love for animals creates a special bond between a couple.  When they first met 47 years ago, their conversation quickly led to a discovery of how they both loved horses.  On their first date the following day, Silver sold Bill a horse and ended up giving riding lessons to her new beau.  At the time of their wedding the following year, they owned two black lab dogs and five horses.  Horses and dogs continued to be a part of their life together.

Bill and Silver rode horses with the Long Beach mounted police in ten Rose Parades and many other events.  Their horses always included at least one rescue horse, as they were keenly aware that pets, including the majestic horses, were sometimes abused and discarded.  Silver fondly recalls her special rescue horse, Galiano, who slowly came out of his shell to show love and gratitude after being horribly abused.

In 2007, the Martins moved to the Coachella Valley.  Silver became active in Animal Samaritans where she met and befriended Lindi Biggi.  In 2008, Silver became a founding member and Board Member for Loving All Animals, a charity Lindi formed to help homeless animals.

In 2010, the story of Duroville went viral in the local news.  This dilapidated migrant worker trailer park in Thermal went into federal receivership due to the unsanitary living conditions for the people there.  Soon the media, looking for a new angle, reported on the hundreds of stray dogs in and near the complex. New housing plans were underway for the human residents, however the pet restrictions at the new complex would only increase the number of strays.

Loving All Animals was determined to help the dogs in and near Duroville.  Seven wonderful local veterinarians eagerly signed up for the 3-day shifts in the Duroville church converted into a temporary vet clinic.

It was a magical weekend, despite the torrential rains that brought mud to the area.  The dogs poured in, their humans grateful for the free services that included snacks and toys for the children.  Some residents helped round up the strays who needed vaccinations, spaying, and other vet services, and animal welfare groups coordinated their rescue.

A resident walked up to Silver as the event was ending, and placed a matted white dog in her arms.  He explained that the homeless animal lived underneath one of the trailers.  The pup was soaking wet, covered in mud, and had no less than 68 ticks imbedded in his fur.  Silver felt an immediate bond with the pup, his condition tugging at her heartstrings.   Thom Daves, director of the old Save A Pet shelter, took the dog to his clinic for grooming and vetting.  Three days later, the Martins picked up Rolex, now neutered, vaccinated, and looking gorgeous.  It was an amazing transformation, and Rolex looked like a pure breed Bichon.

The couple had three other dogs at the time, but Rolex fit perfectly into their pack.  Silver explains, “Bill is always there to walk our dogs, take them to the dog park, or do whatever they might need.  One more dog just meant more love in our lives.  They teach us so much about unconditional love.  In the days when we got the horses ready, the dogs always milled around, making sure they were part of the activity.”

Silver describes Rolex, “He is the best dog we’ve ever had.  He’s always by our side, loyal and loving. Rolex is amazing with the other dogs that arrive for my pet sitting business.  He knows which ones need comforting, and which ones are ready for play.  He is patiently welcomes each new dog, helping them adjust to the new surroundings.”

Now a senior, 11-year-old Rolex is a poster dog for rescue.  Rolex is part of the couple’s extended family, an integral part of all life’s events.  Their love for dogs keeps this couple’s love even more special as they approach their fifth decade together.  Bill and Silver’s theme is “Love Me, Love My Animals”.