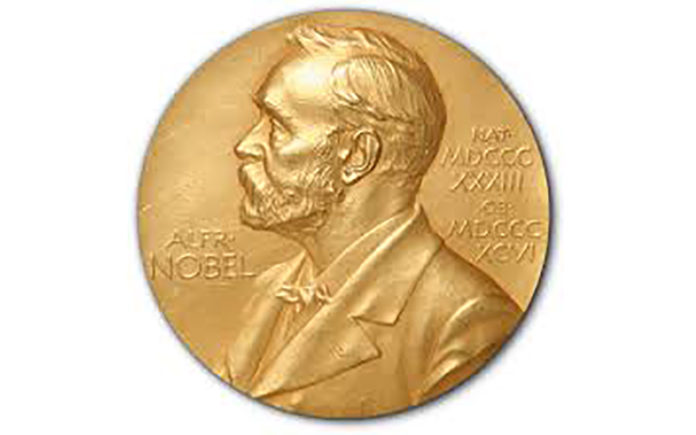 Alfred Nobel is the Swedish inventor responsible for the Nobel Prize.  Nobel held 355 patents for inventions that included dynamite, the detonator and the blasting cap.  In an 1895 newspaper article prematurely announcing Nobel’s death, the writer criticized Nobel for profiting from war.  Nobel responded to this criticism by writing a last will and testament that instructed executors of his estate to use the majority of his net worth to establish the Nobel Foundation and the Nobel Prize as a way of honoring great achievements in the areas of science, literature and peace.  Five years after his 1896 death, the first five Nobel Prizes were awarded in the fields of Physics, Chemistry, Medicine, Literature and Peace.

In 1901, the first Nobel Peace Prize went to Henry Dunant and Frederic Passy for their work at promoting peace.  Dunant is best known for founding the Red Cross.

The first Nobel Prize for Physics went to Wilhelm Rontgen for his work discovering X-Rays while the first prize for Medicine went to Emil von Behring for his work curing diphtheria, a childhood disease that killed many.  Sully Prudhomme won the Literary award for the idealism and passion expressed in his writings.  Jacobus van’t Hoff won the 1901 Chemists’ Nobel Prize as the founder of Physical Chemistry – a discipline that differs from Physics in the way that chemical problems are studied.

It was not until 1969 that the first Nobel Prize in Economics was awarded to Ragnar Frisch and Jan Tinbergen for their work on econometrics – the use of actual outcomes in economic models.

Last week, the Nobel Foundation awarded the Economics Nobel Prize to Richard Thaler for his contributions toward behavioral economics.  Behavioral economics study how human emotions affect financial decisions and how people can be ‘nudged’ into different decisions through various methods.

The 2017 Nobel Prize in Physics went to Rainer Weiss, Barry Barish and Kip Thorne for their contributions to the Laser Interferometer Gravitational Wave Observatory (LIGO).  LIGO proves Albert Einstein’s 1916 theory where he believed that the time-space continuum could be disrupted through massive energy events like the combination of black holes.

The Nobel Prize for Chemistry went to Jacque Dubochet, Joachim Frank and Richard Henderson for developing cryo-electron microscopy for the study of biomolecules.  Cryo-electron microscopy takes detailed 3D images of living things at the atomic level of each cell.  It is believed that their work will help in finding the cures to a variety of diseases.

The Nobel Prize for Medicine when to Jeffrey Hall, Michael Rosbash and Michael Young for their discovery of molecular mechanisms that control circadian rhythm.  Circadian rhythm is the internal clock of any living thing that keeps it on a 24-hour schedule.

For literature, the Nobel Prize went to 62-year-old, Kazuo Ishiguro, for his works of fiction that focus on human failings with powerful first-person narrators that often let the reader inside the minds of Ishiguros’ characters.

The Nobel Peace Prize this year went to Geneva-based ICAN, the International Campaign to Abolish Nuclear Weapons, for their efforts to eliminate the atomic bomb from society.  Founded ten years ago, ICAN successfully helped in getting the United Nations to pass the Treaty on the Prohibition of Nuclear Weapons by a vote of 122-1.  The next challenge will be in getting 50 countries to adopt the treaty.  If the treaty can pass that hurdle, it is likely that some of the United Nations’ five permanent members (China, France, Russia, United Kingdom, United States) will veto the Treaty.  While adoption of the treaty seems unlikely, the Nobel committee felt strongly enough about ICAN’s work to recognize them with their highest honor.

The award dinner recognizing this year’s Nobel Laureates will occur on December 10th in Stockholm, Sweden with www.Nobelprize.org rebroadcasting festivities.

Haddon Libby is the Managing Partner of Winslow Drake Investment Management and can be reached at 760.449.6349 or HLibby@WinslowDrake.com.  For more information, please visit www.WinslowDrake.com.