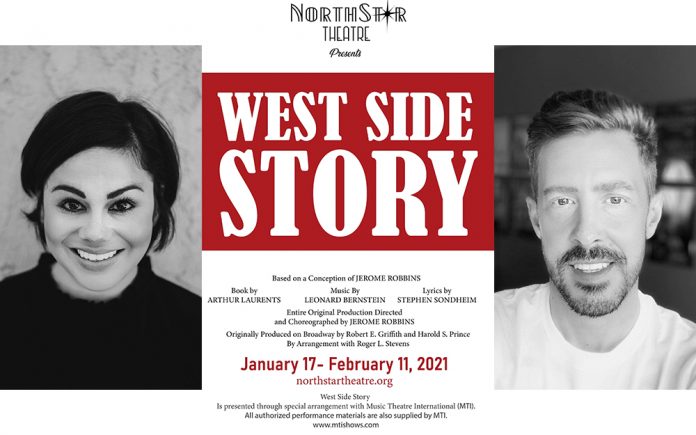 The performing arts has been one of the many industries impacted by the coronavirus pandemic, forcing many venues and companies to get creative with how they present their shows to audiences in order to comply with COVID safety protocols. North Star Theatre Company has re-opened as a new live drive-in theater, brought to you by a group of seasoned actors, directors, and theater creatives that have helmed and starred in countless live productions on dozens of stages throughout the Coachella Valley.

The new venue for North Star will be at the Palm Springs Cultural Center, with live performances of West Side Story playing on January 17 through February 11, with performances on Sunday, Tuesday, Wednesday, and Thursday nights at 7:30 p.m. West Side Story will be performed outside while theater-goers watch comfortably from their vehicles and listen through FM radio transmission.

“My partner James Owens and I went to see one of their drive-in movies to get an idea of how they were staging it. We thought it was a great space, so we reached out to the Executive Director of the Cultural Center and he was very interested in our theater,” explained Christine Michele, Co-Founder and President of North Star Theatre Company.

North Star Theatre’s primary goal centers on creating an atmosphere that is inclusive and celebrates diversity. Those involved believe that theater should be accessible to everyone, and are passionate about expanding opportunities for members in the desert community to experience the world of theater.

Along with Michele as Co-Founder and President, other important players of North Star Theatre Company include Co-Founder and Treasurer James Owens, Vice President Miguel Arballo, Secretary Stephanie Jauregui, and Board Member at Large Kaylyn Bernal.

The idea for West Side Story being the first play performed in the new year came about not only because of its classic reputation, but also the fact that Steven Spielberg’s film version of the musical will be coming out in movie theaters in December. When Hollywood was ready to begin production, the Screen Actors Guild – American Federation of Television and Radio Artists (SAG AFTRA) created COVID-19 guidelines for the industry called “The Safe Way Forward” and North Star Theatre Company adopted many of those guidelines.

“Our whole idea for a drive-in theater was born out of the pandemic. We saw an opportunity to bring live theater back to the community in a new, safe, and inventive way. Theater and art have always been a source of inspiration, not only for the audience, but for the actors as well, and there has been a clear lack of inspiration in the world lately,” said Michele.

There are some challenges that come with the guidelines that many other theaters are encountering as well, such as coordinating virtual rehearsals, virtual casting, and following safety protocols. These inconveniences, however, do not outweigh Michele’s favorite part of owning the North Star Theatre, which is creating a safe space and a place that can be a beacon of hope and inspiration for the theater community.

“We built this theater on a foundation of creativity, overcoming obstacles, and thinking outside the box. And that is what we intend to keep doing. In the sudden absence of theater, many have come to realize just how important theater is in a community. If we can take one thing away as a positive, it would be to never take theater for granted,” stated Michele.