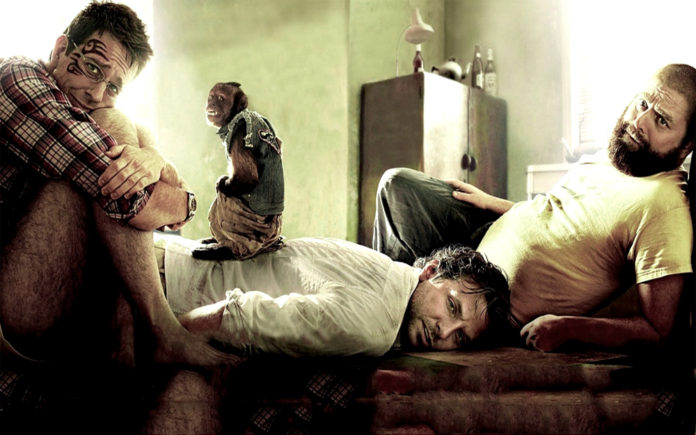 I got alcohol poisoning when I was 18 years old, and I was pretty sure I was going to die of a hangover.

According to friends, I’d drunk a half-bottle of vodka, then tottered two miles to my ex-girlfriend’s house where I triumphantly peed all over her dad’s truck. I staggered back to the party, demanded that someone put on 80’s horror classic “The Gate” then promptly fell asleep and projectile vomited all over myself. I woke up the next morning feeling like death warmed over, and I didn’t drink again until I was 21.

These days, a hangover still gets me to swear-off drinking till at least happy-hour (half price on all pints of craft beer – can’t turn down that kind of value!).

Thankfully we live in the age of Facebook and Amazon Fresh, so finding a hangover cure and having it delivered to your semi-conscious form has never been easier! Here’s a list of the top-ten hangover cures and why they work (or don’t), in no particular order, as provided by me and my fellow Facebook alcoholics.

Whether it’s menudo, pozole, pho, or chicken noodle, a rich and meaty soup or broth contains everything your body needs to eliminate the awful drag of a hangover. Taurine is an amino acid found in all kinds of animal meat. It boosts liver function and may even help prevent liver disease. Taurine is also found in breast milk, so if you’ve got some weird adult fetish for boob juice, rejoice. You just needed taurine baby, that’s all!

Cysteine is an amino acid found in chicken and pork, and breaks down toxins in the body including acetaldehyde, the evil and hard-to-pronounce compound that is responsible for making you feel like someone put an M-80 in your head before lighting the fuse and running away.

Hearty soups also help restock sodium and water levels, and are pretty much the best thing you can do to for a hangover next to building a time-machine, going back in time, and slapping a few drinks out of your hand the night before.

If hearty soups and broths aren’t your thing, breakfast foods like eggs and yogurt contain all the same amino acids, and will also aid in curbing those aches.

According to “The Dictionary of Phrase and Fable,” Greek playwright Aristophanes once said, “If this dog do you bite, soon as out of your bed, take a hair of the tail the next day.”

Okay, what? Was he just super pompous, or really high to come up with an analogy like that? What does that even mean?!

A lot of people swear by a Bloody Mary or mimosa as part of their hangover cure; in fact many of my Facebook friends use a Chavela the morning after heavy drinking as part of their ritual for curing the bummer that is a hangover. Unfortunately, a ritual is all it is. The sad fact is that there is little scientific evidence to show that drinking the next morning does anything more than numb the senses just a little. Some researchers feel that your body experiences alcohol withdrawal while you’re going through a hangover, and that drinking a little more can satisfy those withdrawal symptoms. But all that really does is just extend the misery. It turns out that drinking more of what effed you up isn’t much of a cure.

If you’ve ever felt like you slept terribly after a heavy night of drinking, you’re not alone. What happens when you’re drunk is that the alcohol you’ve been consuming depresses your bodies central nervous system. Your body sees this depression and starts to overcompensate for it. By the time the alcohol is processed, your body has compensated too much and is overstimulated; this is what gives you fitful sleep after heavy drinking.

So, giving your body extra sleep allows it to rest after your CNS has calmed down again. And during that rest, your body gets a chance to replace all the proteins that acetaldehyde had bonded to and ruined. Long story short, that’s why you feel like crap when you wake up in the morning, but when you take that midday nap, you wake up from that one feeling awesome. Well, less like hot garbage anyway.

When I drink, I make sure to match every beer or shot with a pint of water. But not you, you amateur!

Alcohol is a diuretic and it pushes liquid out of your body, even if you’re already under hydrated. If your kidneys are empty, it’s going to pull water from all your internal organs including your brain, causing those awful headaches. You gotta put that water back in your body, champ! Downing a few glasses of water before bed can make a difference in how severe your next-morning hangover is. Rehydrating your body is crucial, and although regular old water is the healthiest thing for you, Pedialyte and sports drinks replace the sugars and salts that your body needs. Those sugars and salts are called electrolytes. Plants crave them.

So, this is an important fact to remember when choosing which pain relievers to take. Aspirin and ibuprofen are both NSAID’s; Nonsteroidal anti-inflammatory drugs, which reduce the inflammation associated with a hangover. Taking them the night before is optimal, as they work to counter the effects of a hangover while you sleep. If you forget to do so, you can still take them the next morning and experience some relief from the aches and pains. DO take aspirin or ibuprofen, but DON’T take Tylenol, Nyquil, or any other acetaminophen-based drugs.

Acetaminophen causes your body to metabolize alcohol more slowly and is quite toxic to your liver in large doses. That’s why the trend of drinking Nyquil based alcoholic beverages like Lean and Purple Drank are actually worse for your body then just drinking regular old spirits (Yeah, I’ve made Lean before. What? I’ve never claimed to be classy).

My drug of choice has always been Alka-Seltzer. Packed with sodium bicarbonate, citric acid and aspirin, this effervescent wonder drug relieves muscle pains while neutralizing stomach acids. One packet of the little fizzing discs combined with lots of water throughout the morning is what I swear by to get me through those barleywine-induced, morning after fogs.

My semi-functioning liver and I will be returning next week with five more of the best hangover cures, and the sciences behind why they work.