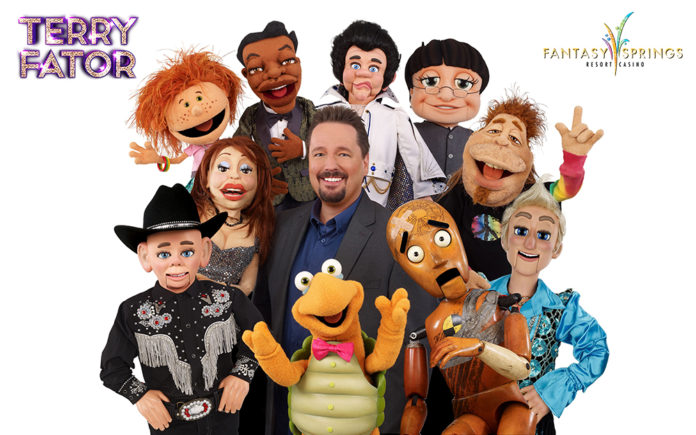 Best known for his victory on America’s Got Talent in 2007, Terry Fator captured the hearts and tickled the funny bones of America with his unique combination of celebrity impressions and his unparalleled voice. On Saturday, April 7th, Terry Fator brings his “It Starts Tonight” show to the Special Events Center at Fantasy Springs Resort Casino.

Returning with Fator will be his all-star team of anything-but-ordinary puppets. These stars in their own right include Duggie the annoying neighbor, Emma the little girl with the big voice, Monty Carlo the lounge singer, Maynard Thompkins the world’s greatest Elvis impersonator and country superstar Walter T. Airdale. Each character allows Fator to sing a different genre in an unbelievable manner with performances ranging from Garth Brooks and Dean Martin to Aretha Franklin, Lady Gaga and more.

Terry Fator’s rise to fame, from his time with a Texas-based cover band to his very own theatre at The Mirage Hotel & Casino in Las Vegas, was 32 years in the making. As a young man, Fator sang lead vocals for Texas the Band, a group whose playlist ranged from Garth Brooks to Guns N’ Roses.

A trip to Las Vegas in 2005 sparked Terry Fator’s desire to become a big-name entertainer and he left town with visions of billboards and bright lights, all featuring his name. Unwilling to give up on his dreams, Fator was persuaded to audition for “America’s Got Talent” when he saw a ventriloquist from season one on the “The Late Show with David Letterman.” During his audition, Fator stunned the judges with his puppet Emma Taylor and her impression of Etta James. In the final episode, a stunning Roy Orbison performance of “Crying” courtesy of Winston The Impersonating Turtle, led to an eruption of praise from the audience, the judges and America. His life would never be the same.

In one year, Fator went from small-town appearances to “The Today Show,” “The Oprah Winfrey Show,” “The Ellen DeGeneres Show” and, at long last, “The Late Show with David Letterman.” He’s now a multiple Best Of Las Vegas winner and can’t wait to return to Fantasy Springs Resort Casino.

Tickets for the 8pm Terry Fator performance on Saturday, April 7, 2018 go on sale Friday, February 9th for $79, $59 and $39 at the Fantasy Springs Box Office, via telephone (800) 827-2946 or online at www.FantasySpringsResort.com. For more information on Terry Fator, please visit www.terryfator.com.