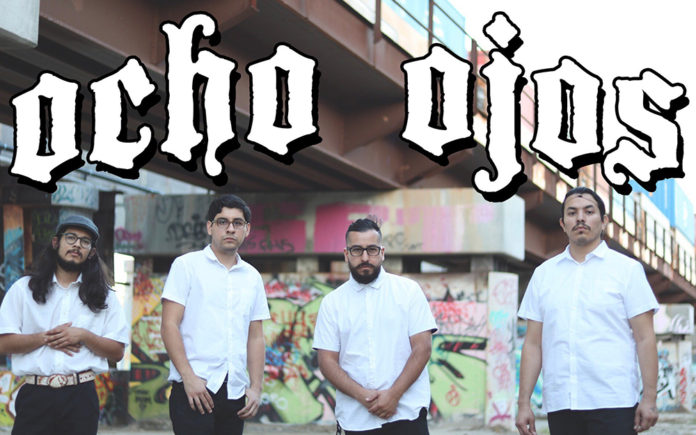 On Sunday April 14th and 21st, 2019 at the Coachella Valley Music & Arts Festival, the Coachella Valley will be further championed by one of our own. Ocho Ojos will be performing at arguably the most revered music festival ever. To say they were “chosen” would be incorrect. Having performed as a duo on the 2017 Coachella bill, the ‘Psychedelic Cumbia’ group earned their spot on the world stage that is Coachella once again and are poised to use the platform to bring heightened attention to their original intermixed music and hometown. With Cesar ‘El Charro’ Flores on guitar/vocals and Danny Lloyd Torres on synthesizer and relatively new members James Gastelum on bass guitar and Rafael Rodriguez on drums, Ocho Ojos appears and sounds complete. Coachella Valley Weekly spoke with Ocho Ojos about the opportunity and their feelings on the milestone.
CVW: Congratulations on your Coachella slot. What a great way to kick off 2019. What does it mean to you?

O.O. “It’s a dream come true for all of us. We’ve all grown up playing music, and playing Coachella Fest is definitely an achievement many bands like us strive for. We’re proud to be performing the 2019 festival and it’s an honor to be representing not only the city of a Coachella, but the entire Coachella Valley, and the Latin community as a whole; as many Latin artists have been entering the mainstream music scene. Latin artists are beginning to headline other major music festivals like Coachella Fest, and we’re excited to be a part of this movement!”

CVW: What is the meaning behind your band name, Ocho Ojos?

O.O.: “The origin to our band’s name Ocho Ojos goes back to the beginning of the group. Originally, the band started out as a duo, Cesar and Danny. Both wear glasses (4 eyes + 4 eyes) hence the name Ocho Ojos, which is Spanish for 8 eyes.”

CVW: Cumbia music makes up a generous part of your music. The courtship dance that originated in Columbia is very popular in the Coachella Valley. Where does that inspiration to play Cumbia music come from? 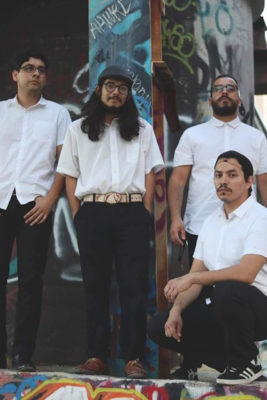 O.O.: “It’s simple; our love for playing Cumbias goes back to our upbringings. Cumbias are a big part of all Mexican-American family gatherings. Especially here in the valley, where there is a large Latin community, especially in the eastern Coachella Valley. We draw our inspiration from all of this and more. At its core, Cumbias are extremely rhythmic and blend with many other styles and genres of music. All four of us are diverse musicians; playing Cumbias allows us to stick our roots while continuing to be innovative.”

O.O.: “In a year, we see ourselves having a record out and playing events and venues across the U.S and Mexico. Five years from now, we see ourselves being on a label and touring with a national act, like Cafe Tacuba. In 25 years, we see ourselves simply doing what we’ve been doing; our first love, playing music. Using music to give back to our communities in the Coachella Valley.”

CVW: What events do you have leading up to Coachella?

O.O.: “We have quite a few shows in the coming weeks before Coachella Fest. Two will be in Los Angeles. We also have a few local shows!”

You’ll have plenty of opportunities to catch Ocho Ojos before their Coachella appearances. If you are a desert resident and are at Coachella, make sure to be present during Ocho Ojos’ set. Here’s hoping they bring up Desert Hip-Hop artists Provoked, Savier1 and Verzo Loko to perform their hybrid track Xibalba off their 2018 12 Ojos single.