He stalked her. Beat her. Threw her down a flight of stairs. Ran over her with his car. Raped her. Took control of all of the money. Isolated her from family and friends. Terrified the children. Brutalized her over imagined wrong-doings. Reduced her self-worth to ashes.  Kept her bruised, bloody and broken….but why didn’t she just leave?

-American women experience 4.8 million physical assaults and rapes at the hands of their intimate partner every year.  (Source: National Organization for Women)

-1 in 4 American women, (25%), experience sexual violence, physical violence and/or stalking by an intimate partner during their lifetime.  These statistics do not include all violence against women in the U.S.  With such a shockingly high figure for a developed nation, it’s no wonder why the U.S. has been an outlier on the list of worst countries for women. In looking at the history of violence against women, the only surprise is the level of denial still in effect in 2021.

In the late 1400’s, Friar Cherubino of Siena, in his Rules of Marriage, created the process by which a husband was to rule his wife, recommending:   ‘When you see your wife commit an offense, don’t rush at her with insults and violent blows…Scold her sharply, bully and terrify her. And if this still doesn’t work…take up a stick and beat her soundly, for it is better to punish the body and correct the soul than to damage the soul and spare the body…then readily beat her, not in rage but out of charity and concern for her soul, so that the beating will redound to your merit and her good.’”

Coverture, was a legal doctrine established as a part of the founding laws of America. It is an Anglo-American Common Law, that dictated once married, a woman’s legal existence as an individual was eradicated under “marital unity,” Coverture considered husband and wife a single legal entity: that entity being the husband.  The law stripped a woman of all legal control over her property, her possessions, her children and even her physical person. The husband had exclusive power and this included the right to physically assault her and their children.  This law began to be disassembled in the United States through legislation in the late 1880’s, though the subjugation of women has been maintained through church and cultural teachings.  A big motivation in the fight for women’s suffrage, was the goal of self-governance and the ability to protect themselves and their children from emotional and physical violence.

Women were also a driving force behind the prohibition movement of the early twentieth century. According to Daniel Okrent, former Time Inc. editor-at-large and author of Last Call: The Rise and Fall of Prohibition, “Men would go to the tavern, drink away mortgage money, drink so much they couldn’t go to work the next day, beat their wives, abuse their children. That’s what launched the beginning of the temperance movement,”

In 1994, Congress passed the Violence Against Women Act (“VAWA”). This Act recognized that domestic violence was a national crime.

Though making something illegal after centuries of indoctrination and acceptance, does not fix the problem.  An intolerance for violence against women has to be ingrained in the human psyche.

From 2016 through 2018 the number of intimate partner violence victimizations in the United States increased 42%.  Perhaps a reflection of the toxic acceptance of misogyny emanating from the top leadership in the U.S.

In 2018, partner violence accounted for 20% of all violent crime.

Intimate partner violence is most common against women between the ages of 18-24.

Domestic Violence during the Covid lockdown ballooned at a staggering rate around the globe. Cultural and religious norms have allowed the violence against and subjugation of women to continue.  Often ignored or rationalized, it is uncomfortable to confront the screams and easier to ignore the terror we know is taking place behind a drawn curtain.   We prefer to believe that America isn’t guilty of supporting some of the highest rates of violence against women in any developed country and as a result we allow ourselves to become unwitting accomplices in a national epidemic that has no end in sight.

Why doesn’t she leave?  Every year 4,000 victims of domestic violence are murdered. (That is a  greater number than America suffering through a catastrophic annual 9/11 event.)  According to the U.S. Department of Justice, 95% of these murders are committed by men against women. Yet battered women who stay with their abusers are at a 75% less risk of getting killed by them because leaving an abusive relationship ironically puts their lives at greater risk due to the abuser’s fear of losing control. 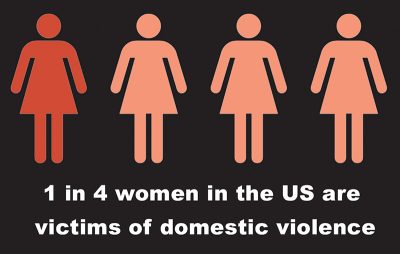 The National Coalition Against Domestic Violence defines Domestic Violence as the willful intimidation, physical assault, battery, sexual assault, and/or other abusive behavior as part of a systematic pattern of power and control perpetrated by one intimate partner against another. It includes physical violence, sexual violence, threats, economic, and emotional/psychological abuse.

Every individual has the power to make a difference. Save a life, empower others and stop accepting violence against women as a cultural norm.

If you or someone you know has a need for domestic violence support services, please call