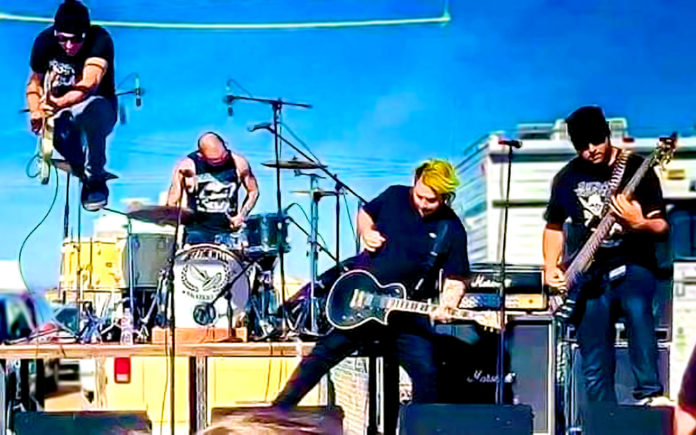 The high desert music scene is filled with psychedelic sound waves and bohemian beats, but one Yucca Valley-based punk rock band is going against the grain. Off the Wall consists of original founding members David Ladd on vocals and guitar, Ronnie Wilson on drums and vocals, and two-year bass player Weston Capela.

The band first started in 2015, spurred by a childhood desire to make music. “Ronnie and I have always grown up playing music together since we were kids and we wanted to start a band. I’ve been playing guitar since I was eight years old in the 1990s, so I’ve been at this for about 25 years,” said Ladd.

The members of Off the Wall were very much immersed in the skater subculture during their teenage years, even going as far as to name their band after the slogan of their go-to shoe brand: Vans.

“The shoes we all skated in were Vans. We jokingly humored the idea of naming the band after that specific shoe. We never changed it,” revealed Ladd. 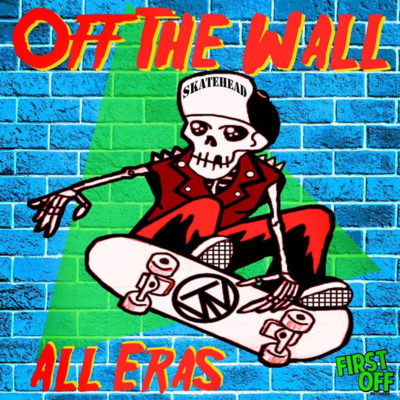 “Paul Francis of Get Right Recording is who produced our album. He did a great job. He’s one of the best people to make an album with,” said Ladd, crediting Francis as one of the key players involved in the creation of All Eras.

Ladd writes a majority of the band’s songs, citing his personal favorite songs on the album as “That One Girl” and “Digital Assassins.” The creative process of the album from start to finish was a collaborative effort with all the members of Off the Wall.

“When I write a song, I basically just get inspired by whatever I’m going through at the time. I’ll sit down and write some guitar riffs. Then I’ll bring what I have to the rest of the band and we’ll put a song together,” explained Ladd.

Off the Wall is gearing up for more live performances to promote the album. They will have a record release show on July 21 at Pixels Bar & Eatery in Riverside. They will also be playing at the Adelanto Stadium on June 28 and the Idyllwild Strong Benefit Show in August.

“When we play, we never want to be one of those bands who just stands there and plays. We want everyone to feel like they’re a part of what we’re doing. We’ll do cover songs and have the audience sing along and have five different people jump up on stage with us,” said Ladd.

Off the Wall has several influences for their sound, including skate punk pioneers like the Descendants, Guttermouth, Stan Lee from The Dickies, and Rikk Agnew of The Adolescents.

“Rikk Agnew is somebody I really look up to. He has a self-titled album and played everything on the entire record himself—the guitar, keyboard, drums, bass, and vocals. That was something that I saw as a kid and made me want to learn how to play everything to know how a band works,” stated Ladd.

The band is also very family-oriented, making sure to promote the same love of music to their own children. “We’re all dads and all of our kids are friends. That’s something that ties into the new album. Another reason it’s called All Eras is to represent raising the next generation of punk rock listeners,” said Ladd.

Off the Wall has already made waves in the underground world of punk rock, even getting the chance to share the stage with big names in the genre like Agent Orange and The Adolescents.

“We’ve already accomplished way more than I ever thought. We’ve gotten to play stadiums with some of our favorite bands growing up. They’re all dudes I looked up to, and it’s awesome to have become friends with those guys. It’s just getting better and better. I can’t wait to see what’s next and for everyone to hear our music,” shared Ladd.