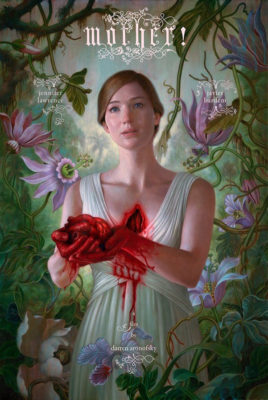 Darren Aronofsky’s latest movie is a challenge to describe and/or review.

No full plot summary does it justice because the movie is clearly a religious or spiritual metaphor.  It’s an allegory that mirrors our shared beliefs and sacred texts.

Jennifer Lawrence and Javier Bardem play a childless couple living a quiet life in the country.  He’s older and a well-known poet with a serious case of writer’s block.  She’s fixing up their place hoping to have a family.

Their peaceful relationship is put to the test when uninvited guests  (Ed Harris and Michelle Pfeiffer) arrive at their home.

Bardem’s character is known only as “Him.”  My guess is he’s a stand-in for God.  Lawrence is Mother Earth.  Harris and Pfeiffer are Adam and Eve.  Their two fighting sons are Cain and Abel.  Ok, are you still with me?  Much more happens when

This surreal cinematic allegory is much more than a horror film, or haunted house story, as bloody and ghastly as it sometimes is.  Never the less, I found it extremely compelling and as intellectually engaging as it is off-putting.

My initial instinct was to walk out after the first act, but I’m glad I remained in my seat. 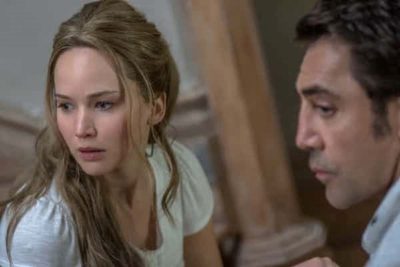 Cinemascore gave it an unheard of F and I have no doubt it will be reviled by most but hopefully revered by a few.  I am among the latter and going on the record saying it’s a masterpiece, even a work of unhinged genius.

This movie is about nothing less than how we treat each other and the planet and — much more.

Pay attention.  Every now and then a movie comes along with something to say that needs to be said.  Recommended, but it may not be for everyone.

NEW BLUE FOR THE HOME THEATER:

PIRATES OF THE CARIBBEAN: DEAD MEN TELL NO TALES 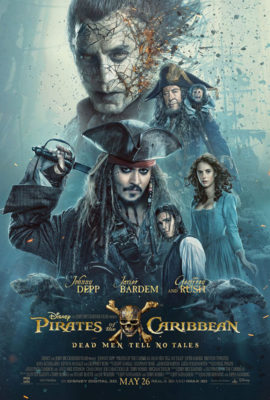 Johnny Depp is back as wobbly, drunken swashbuckler Captain Jack Sparrow who is now down on his luck and feeling the buffeting and decidedly ill winds of fate when killer ghost sailors under the command a fearful Captain Salazar (Javier Bardem) escape from the Devil’s Triangle intent on not only killing all pirates – but especially Sparrow, who soon deduces his only hope for survival is gaining possession of Poseidon’s Trident.  But first he must establish a working relationship with the beautiful astronomer Carina Smyth (Kaya Scodelario) and handsome Henry (Brenton Thwaites), an impetuous young sailor in the Royal Navy.

Helming his shabby ship, The Dying Gull, Captain Jack tries to reverse what appears to be a looming demise and save himself from the most ferocious foe he has ever encountered.

Does any of that make sense?  No matter because it doesn’t really matter in this tattered, overly complicated and obtuse fifth outing of the huge grossing Disney franchise based on the beloved vintage amusement park ride?

The only thing this visually rich sea-going adventure has going for it is the eye-popping production design and the wonderfully rendered (mostly CGI) special effects in the many beautifully choreographed action sequences.   Depp, Bardem, Thwaites, Scodelario and Geoffrey Rush (as Barbosa) are all fun to watch and earn their keep with journeyman performances that carry or convey little emotion to the grander story and theme (whatever that is).

My favorite moment in the movie is the encounter between Depp’s Sparrow character and Sir Paul McCartney’s almost unrecognizable cameo.

Dead men may tell no tales, but sadly, this franchise is dead in the water.

The big draw of this expansive and expensive ($130 million budget) oceanic epic for the large screen home theater is the superb truly dazzling state-of-the-art 4K Ultra HD transfer that must be seen to be believed.  If the movie is of interest, the generous bonus features will hold your attention (deleted scenes, bloopers, making of, photo library and more).  Disney.  Blu-ray Ultra HD.