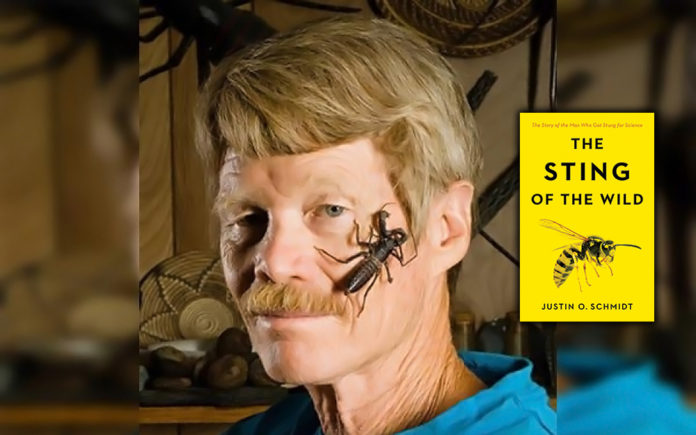 —–
The Sting of the Wild
by Justin O. Schmidt – Nonfiction
—–

In the United States alone, there are 10 quintillion insects that’s  –10,000,000,000,000,000,000!  Fortunately, only one percent of the six-legged creatures are harmful to humans.  The Sting of the Wild by Justin O. Schmidt (John Hopkins University Press, 280 pages) provides a first-person account of those insects that sting and why.

By far, most insects are harmless and even those that sting provide significant benefits to our planet’s biodiversity.   In fact, they are essential to a healthy environment and successful flora, which as humans, we require.

Author Schmidt is a biologist at Southwest Biological Institute and is associated with the Department of Entomology at the University of Arizona.  He loves bugs.  And for the sake of science, he has allowed himself to be stung a multitude of times.

As a child, bugs intrigued Schmidt.  He liked to observe the small creatures and marveled at their tiny bodies, and their large “social” groups.   Like in the movies, his friends challenged him to knock down a hornet’s nest from an old tree to see what would happen.  He was stung.

As a scientist, an entomologist, Schmidt has been stung in the field and in the lab.  His students would also occasionally get stung while feeding captive insects under study.

When a grad student was stung by a “cow killer,” writhing in pain and thinking he was going to die, an emergency call was made to Schmidt by university security.   After hearing which insect did the damage, Schmidt assured the student, and the university, the pain would pass and there would be no harmful side affects or permanent injury to the student’s health.

Schmidt realized there was no scientifically proven or accepted method to measure pain caused by stinging insects.

The Sting of the Wild not only explains his research and discoveries, but also delivers a hugely entertaining and informative personal narrative about the nature of stings and the creatures who deliver them — specifically ants, bees and wasps.

Because the majority of people have been stung by a bee, Schmidt uses the common honeybee as a reference point.  The honeybee pain level is 1.  Starting at zero, where there is no pain from a sting, Schmidt’s scale has a total of four levels.  Four is when pain feels nearly intolerable.

The author does a wonderful job explaining how significant sting pain can be.  In some cases, like a sting from the level four tarantula hawk wasp, it can last eight hours.  Certainly there is nothing funny about someone suffering and in pain, but there is a charm and humor when Schmidt takes a sting in the name of science.

The book begins with the broader world of insects, their structure, predation, chemical make-up, social behavior, etc., to specific insects and the nature of their stings.  Schmidt includes a neatly organized appendix for quick reference of stinging insect’s pain levels.  He has identified 91 stings.  Schmidt keeps his research references separate from the well-written prose.

One of the reason I love living in the desert is because of the abundant life that flourishes here.  Many of the insects Schmidt writes about live around us in the CV.

A book like The Sting of the Wild is such a pleasure to read, because, one, the author is an expert — especially one willing to take pain for his profession – and, two, he has a clear narrative voice, and, three, he is passionate about the subject matter.  I liked him and his bugs.

As a reader, I never felt bogged down by the science, in fact it was enlightening and exciting — especially since I can look up and see beautiful hawk wasps flying around my yard.  But, I appreciated and was fascinated by the chemical functions and interactions between insects and humans.

Schmidt stays on topic while quickly summing up eons of insect evolution along with the chemical breakdowns that make these tiny creatures so potent and important to the earth’s biodiversity.

At times, I felt there might be a lager metaphor about our human society and how we protect ourselves against those who may want to harm us.  Whether there is more meaning about ourselves in The Sting of the Wild, or not, it is a gift to be able to better understand the living things with whom we share the planet.