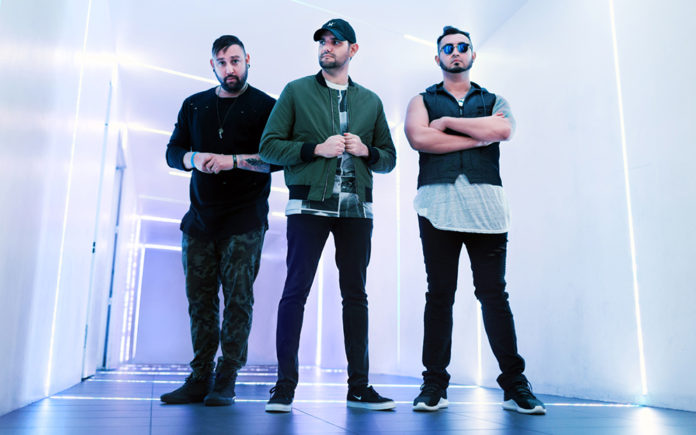 One Shot Thrill is back! What better night to return than an event called TERRORFEST! Since debuting in 2014, OST has been busy behind the scenes and are ready to return to a much changed music scene. OST will be bludgeoning the crowd with their own brand of multi-genre terror on Saturday, October 28, 2017.

I caught up with vocalist Daniel Tapia to talk about where OST has been and where it’s going. With bassist Frankie Garcia and Tapia in the desert and clean vocalist, guitarist and keyboardist Rob Hernandez currently in Orange County, OST is a little spread out but they continue to declare the Coachella Valley as their infinite home.

CVW: First of all, where the hell have you guys been?

Daniel Tapia: “That’s the question we have been asked quite a bit the past year but now can shed some light on. The simple answer is we have been working our asses off behind the scenes nonstop. We quietly signed a management deal over a year ago and recently wrapped up a new EP at Interlace Audio in Portland, Oregon with Billboard chart topping producer Kris Crummett (Sleeping With Sirens, Crown The Empire). We also filmed a new music video with well respected director Dillon Novak (Issues, Jessy y Joy). We are currently in talks with labels and hoping to release a new single before the end of the year and plan on dropping the EP early next year with or without a label.”

CVW: OST has had much success in the past. How have you and your sound evolved and how do you think audiences will respond?

Tapia: “When we launched our music video, “Lately”, two years ago we had a vision of fusing multiple genres at that time; EDM and metal. Fast forward to some of our current singles and our sound has evolved beyond those two genres. OST’s current sound pulls from a vast array of musical influences fusing rock, EDM, rap and RandB. Our concept has always been to create a sound where people don’t speak of genres when listening. Growing up in a metal band I was always trash talked for trying to fuse metal with different genres, I think now people are more open-minded and respect each other’s music and sound, especially here in the Coachella Valley. We have the most diverse festival every year and the most divergent set of local artists. It shouldn’t be about going to a metal or indie show, it should be about supporting the art”.

CVW: Where does OST derive its musical and lyrical inspiration?

Tapia: “Our music always covers real life situations. As far as the band’s lyrics, production and direction, we like to write music that does not define us by what we sound like, but by the emotion it draws. Growing up I always had a natural urge to express what I was feeling when battling depression, I was able to do that through music. The ability to connect with our fans on an emotional level has always been number one for us. Ever since we released our first couple of singles we have had fans reach out to us telling us their stories on how our music saved them. To be able to help others the way music has helped me is truly an amazing feeling”.

“Rob and I have been through a lot in our lives where we both can relate on almost everything. So whether we write a song about dealing with depression, relationships or how fucked up the world is today, we can always relate and connect that with our audience”.

CVW: How did you get connected with TERRORFEST & what should we expect?

Tapia: “We were approached by promoter Paul Zepeda awhile back and he wanted us to be a part of the show at some point and we said let’s do it! So big thanks to him and his team for having us on. We are definitely excited for this show since we haven’t played in over a year being extremely busy in the writing/recording process but the timing couldn’t be more perfect. Our new music is now complete and the sound of these new jams will definitely rock the fest. If you have seen Rob and I in previous projects you know we plan to put on one hell of a show. Performing live is where we shine most. We plan to make this year’s TERRORFEST a night to remember!”

Listen to their latest EDM / Rock infused singles “Lately”, “Chasing” and “End of the World” on Apple Music/iTunes, Spotify or the OST website. Don’t miss OST at TERRORFEST!