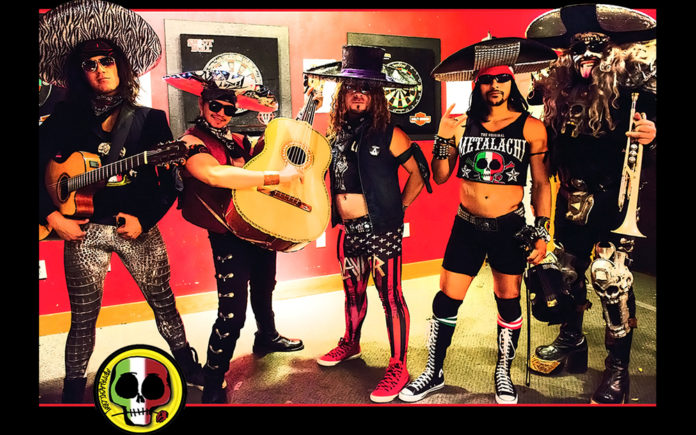 As far as I know, Metalachi remains the World’s First & Only Heavy Metal Mariachi Band. Based out of Los Angeles, Vega De La Rockha, El Cucuy, “Queen” Kyla Vera, Paco Halen, Nacho Picante &Warren Moscow have performed in the Coachella Valley multiple times. They conquered The Hood Bar & Pizza in 2013 & have created an annual residency at The Date Shed the last couple of years. Their unique acoustic approach using time-honored mariachi instruments will be on display Saturday, October 28th as they headline TERRORFEST to spook the dudes & scare the panties off their dates. Their mariachi + metal + comedy show is unlike any you will ever witness.

CVW: What is it about the Coachella Valley?

Metalachi: “Every time we come to the Coachella Valley we are received with the warmest of welcomes. We are so fortunate to have a fan base that is so loyal to us and what we represent. We call it ‘Metalachi Nation’! That is what we enjoy the most about coming down to the desert cities; our fans and what they bring to every Metalachi concert. They are loud, sing along and they are the life of the party!”

CVW: What’s the difficulty level of performing metal classics in the style of mariachi?

Metalachi: “Not that they are difficult to play in mariachi, but they might not have the same punch as that of the original song on its own as metal. I believe any song can be played with mariachi instruments but won’t necessarily mean it will be to our liking. There have been a couple of songs we’ve worked on but that at the end we decided not to keep because either the audience doesn’t react to it as we would like or because it needs more work.”

CVW: What do you do in your off time & are you guys & gal as funny as you are on stage?

Metalachi:“When we’re not on tour we have rehearsals at least one time a week so as to not forget the songs or to work on new ones. We also work on our new Metalapodcast where we already have thousands of downloads! I don’t feel like we stop being funny. Being funny is a way of life and helps us maintain that humorous attitude towards living. There are of course certain circumstances where we need to be serious and we know how to flip the switch when need be. When we are on tour and have days off we usually look for places to go. For example, we look for caverns around the area and to see new places. We go to the movies, exercise or if someone wants to stay at the hotel they can just chill. It’s always a good time. We try to keep it interesting and of course try to rest when we have days off if the schedule is tight.”

CVW: What do you want to say to those attending TERRORFEST?

Metalachi: “We just want to invite everyone to come and party with us at TERRORFEST and to remember to get their livers ready for all the tequila that will be consumed because the more you drink the better we sound ha-ha! But on a serious note, we would love to see everyone there to rock out with your taco out! We’ll have shirts, stickers and CDs for sale. Also I would like to let them know that our new album is done and we’re in the mastering process so look for it soon on iTunes! WE LOVE YOU METALACHI NATION!”

“Metalachi will make you want to drink tequila while you head-bang to declare your love for your girlfriend’s spandex. Heavy metal never felt so good!” – David A. Macias (Machin’)

“They’re a bad-ass mixture of 80’s rock & mariachi that have fun interpreting their versions of the 80’s metal songs. They look like they are a cross between KISS and Day of the Dead! They’ve added a female violin player that can shred as good as Slash on “Paradise City”!! – Martin Barrera (5th Town, Aphrodisiac Jacket)

“A perfect merging of Metal and Mariachi” – Howard Stern

“Very entertaining and a blast to listen to. So glad that these guys and gal exist.” – M. Shadow (Avenged Sevenfold)

“I love Metalachi…absolutely a blast with great musicianship & awesome humor. A must see every time they’re in town. Hellyeah!” – Vinnie Paul (Pantera, Hellyeah)

Find their Metalapodcast on iTunes!