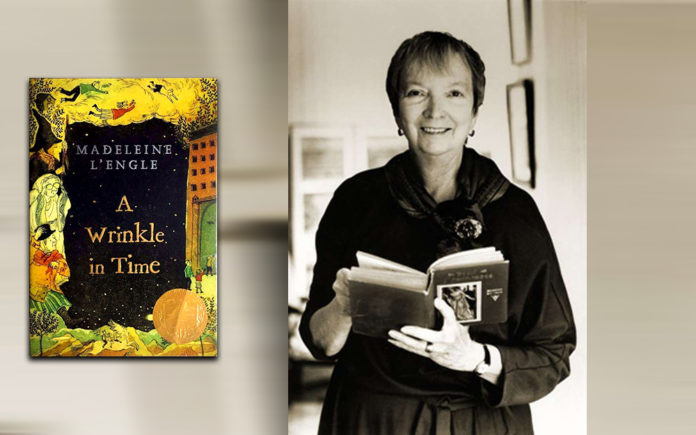 The universe is a magnificent and mysterious place.  Scientists believe it’s 10 billion light years in diameter with inestimable galaxies.  Our solar system – the sun and its eight planets – is 26,000 light-years from the center of the Milky Way galaxy.  Madeleine L’Engle’s A Wrinkle in Time (Square Fish, 265 pages) explores space travel in a journey to discover the meaning of love.

The story is about Meg Murry who is an awkward girl and an outsider in school.  Since her father, a physicist, mysteriously disappeared while working on a secret project, she has become disengaged and angry at the world.

Meg refuses to believe her father abandon the family.  Her frustration and helplessness is deeply affecting her mental health.  The only person Meg is able to relate to is her extremely gifted, five-year-old brother Charles Wallace.

One night, a mysterious visitor, Mrs. Whatsit, arrives at Meg’s home.  Charles knows the eccentric woman, and when the stranger uses the word “Tesseract,” Meg realizes the woman knows something about her father’s whereabouts.

The next day, Meg and her brother meet up with Calvin, a boy from school, and visit Mrs. Whatsit and her friends Mrs. Who and Mrs. Which.  The three ethereal women characters share with the children that they do indeed know where in the universe Meg’s father is located.  Mr. Murry is being held prisoner on a planet in another galaxy and the only way to get there is by “tessering.”

To “tesser” is to travel through space and time by pulling linear points together creating “a wrinkle in time.”  The three “Mrs. Ws” guide the children through their first space trip, but cannot go to the place where Mr. Murry is kept.

When the children arrive on the planet Camazotz, they discover a strange world where everyone is basically the same.  They go to the “CENTRAL Central Intelligence” and talk to the leader, “the man with the red eyes.”

But, the man with the red eyes is not the one in charge.  “IT” is the supreme leader and IT is holding Mr. Murry.  With cunning bravery each child uses his and her skill set to free Meg’s father.  However, in the process, Meg’s little brother Charles is left behind with IT possessing him, and Meg will not leave without her brother, even if the space travel may kill her.

A Wrinkle in Time was written for children ages 10 to 14, or readers at sixth grade level and up.  In 1962, when author L’Engle wrote the book, it became popular and crossed over finding a wider older audience like many of the YA (Young Adult) books do today.

There are adult themes that resonate in the narrative.  Specifically, the man with the red eyes, a spokesman for IT – a brain that sits on a table — debates freedom with the children.  He claims life on Camazotz is perfect because he makes all the decisions.  “I am freedom from all responsibility.  To come to me is the last difficult decision you need ever make.”

When Meg quotes from the Declaration of Independence: “We hold these truths to be self-evident, that all men are created equal, that they are endowed by their Creator with certain unalienable Rights, that among these are Life, Liberty and the Pursuit of Happiness,” IT agrees with her saying: “On Camazotz we are all happy because we are all alike.  Differences create problems.”

One of the moments that impressed me was when Meg is told, then realizes, her anger and fear is justified, and in fact, is useful in helping get her brother back – his mind and body released from being possessed by IT.

Meg is often paralyzed by just not knowing what is the right thing to do.  She doesn’t want to make a mistake or wrong move that could jeopardize the mission.  I liked that Meg discovers that decisions take a level of bravery and that she has to have the confidence to commit to her ideas.

I do not consider A Wrinkle in Time a masterpiece or great work of literature; it has many flaws.  For instance, the “Mrs. Ws” are totally under developed as characters and why the Mrs.?  Who are they married to — God?  But, it is a good book for young readers who are trying to understand the complicated nature of becoming an adult and the greater world around them.

The book has been popular with Christians.  It references the Bible a few times, and mentions a loving, all knowing God.  But, that “God” doesn’t play a roll in the bigger meaning of the book.  Mrs. Which dresses like a witch, a medium uses a crystal ball to show the kids their families, and science explains the universe.  An octopus-like alien, Aunt Beast, heals Meg and tells her about love.  These hardly seem like Evangelical tenets.

However, the lesson for Meg is about love—for self and “the other.”  Although she was searching for a “father” to make her world right again, she discovers that humans are fallible and she must first love and trust herself.  She realizes love is without limits and love can change the world – even the universe.