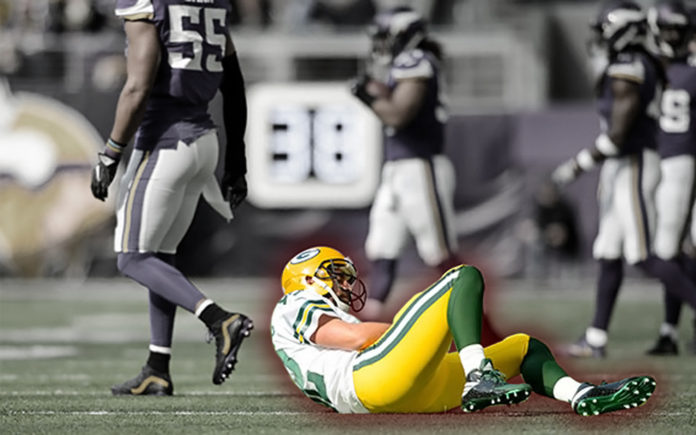 Considering the seismic shift it created, it was a pretty run-of-the-mill play. Early in the first quarter of the Packers’ 23-10 loss to the Vikings on Sunday, Aaron Rodgers escaped pressure, rolled to his right, and threw about 15 yards downfield to tight end Martellus Bennett, who dropped the ball. Except after Rodgers let the pass go, Minnesota linebacker Anthony Barr hit Rodgers and landed hard on top of him, driving the two-time MVP’s throwing shoulder into the turf and leaving him writhing on the ground in pain. Rodgers was carted off to the locker room, and shortly after that, the team announced he had suffered a broken collarbone, adding there was “a chance” the Packers’ most irreplaceable player could miss the rest of the season.

It is hard to overstate the impact that play could have—not just on the two teams involved, but for the NFL at large. Coming into this week’s tilt with the Vikings, the Packers had established themselves as one of the best teams in the conference, if not the league, and looked like an obvious Super Bowl contender thanks to the electrifying play of their superstar quarterback. But Rodgers’s injury sends Green Bay skidding off what looked like a clear path to the postseason, and makes the already-murky playoff picture in the NFC even murkier.

Worst-case scenario, Rodgers is done for the year. Best-case scenario, Green Bay gets its star quarterback back sometime in mid-December, a seven- to eight-week timeline for recovery based on the time he missed (seven starts) with a broken collarbone back in 2013. Of course, Rodgers managed that turnaround with a cracked left collarbone; this time the break is on his right side—a factor that could have a bigger impact on his throwing motion and his ability to drive the ball downfield. So if we land somewhere in the middle of the worst- and best-case options, with Rodgers making it back just in time for the playoffs, the Packers’ Super Bowl hopes rely on the team treading water long enough to secure a spot in the postseason. Per ESPN’s Brian Burke, the odds of a Packers playoff berth have gone from a near-certainty with Rodgers at the helm to what amounts to a coin flip without him—and that feels generous.

But with a 4-2 start, the team has a little built-in leeway. The NFC North is a relative mess through six weeks, too: The Vikings (also 4-2) have a strong defense to lean on, but they’ve got plenty of injuries to deal with on offense too, with starting quarterback Sam Bradford’s season in doubt, star running back Dalvin Cook out for the year, and top receiver Stefon Diggs dealing with a groin injury. The Lions (3-3) got off to a quick start, but that feels like a distant memory after two straight losses, and the Bears (2-4), are, well, the Bears. With a middling defense and rookie quarterback Mitchell Trubisky at the helm, it’s tough to expect Chicago to make a real run at the playoffs.

However, Green Bay’s strong start may not be enough to propel the Packers into the playoffs. The drop-off from an MVP candidate to a backup/replacement option will be massive. The team’s not going to coax Brett Favre out of retirement or tempt Tony Romo out of the announcers’ booth, so that likely leaves third-year backup Brett Hundley (who threw three picks in relief Sunday) to lead the offense until Rodgers can get back onto the field. And it’s just unrealistic to expect the 24-year-old former fifth-rounder, who hadn’t played a meaningful snap in his career before Sunday, to run the Packers’ precision passing scheme to anywhere near the same efficiency as we’ve seen it run under Rodgers this year. The parts of the Green Bay passing game that first come to mind are all made possible by Rodgers’s unique skill set: His ability to identify and exploit weaknesses in the defenses, his talent for getting free plays by coaxing defenders to jump offside, his bazooka arm, and his knack for getting outside the pocket, extending plays, and finding his receivers in the back of the end zone. Without all that, the Packers offense is going to be almost unrecognizable.

The team will have to rely instead on its middling, injury-riddled defense (which came into the week ranked 20th in Football Outsiders DVOA and 18th in points allowed) and an efficient but not prolific rushing attack (which ranked 21st in total yards after five weeks) to carry them from here on out. Basically, as NBC Sports Radio Host Pete Fox put it:

“A big problem for the Packers’ chances without Aaron Rodgers is they aren’t particularly good at anything besides having Aaron Rodgers”. Bingo.