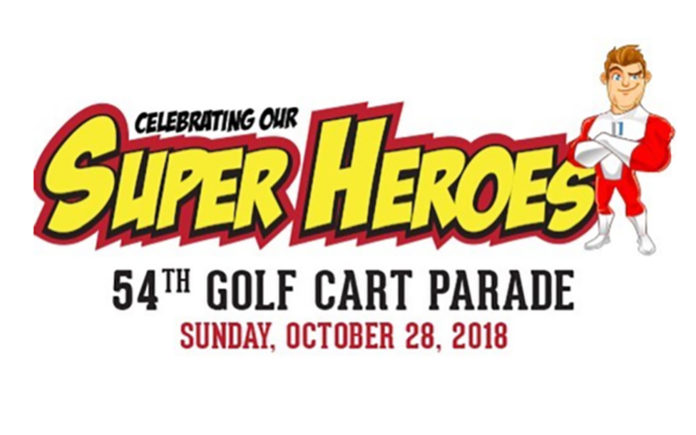 Gone are the triple digit temperatures and monsoon thunder storms. In its place, clear skies, mild temperatures and plenty of outdoor activities. From October through May there are more outdoor events than you can fit on your calendar.  Considered the “unofficial kick-off to the season,” The Palm Desert Annual Golf Cart Parade is a one-of-a-kind parade and the longest running parade in the Coachella Valley.

There’s no better way to ring in the cooler fall temperatures than enjoying the spectacular color and pageantry as the themed carts roll down El Paseo. This year’s Theme was “Celebrating Our Super Heroes” The whimsically decorated golf carts are the main draw, but the colorful superheroes costumes did not disappoint. The route is 3/4 of a mile from San Luis Rey to Ocotillo. Finding a place to park wasn’t a problem since there are several parking lots and a parking structure in the area.

Parade goes who came early and stayed late enjoyed a Beer Garden, lots of food vendors and fun booths. The kids’ zone was a hit with the families lined with games, bounce houses and a rock wall. Golf cart enthusiast were once again invited to come out to cast their votes for the People’s Choice Cart. The theme for the 2018 Parade “Celebrating Our Super Heroes” was entered by Coachella Valley resident Ginny Mix.

The Palm Desert Annual Golf Cart Parade celebrated its 54th run this year. Hilma Lawrence, manager of the Firecliff Lodge, was the originator of this beloved event.  In 1963, she rallied local service clubs to host a “Christmas in July” golf cart parade.  It was later renamed “Midsummer Madness Golf Cart Parade.”  After several years of enduring the summer heat, the parade was moved to the last Sunday of October.

Think of a mini Rose Parade where the carts are decorated with tissue paper instead of roses. Then add bands, clowns, and other marching groups. It is a fantastic local celebration and tradition that you must see! The creativity displayed by the golf cart entrants, the family-oriented entertainment enjoyed by all, and the collaboration of businesses, non-profit organizations, and generous foundations make this a must-see experience for all.