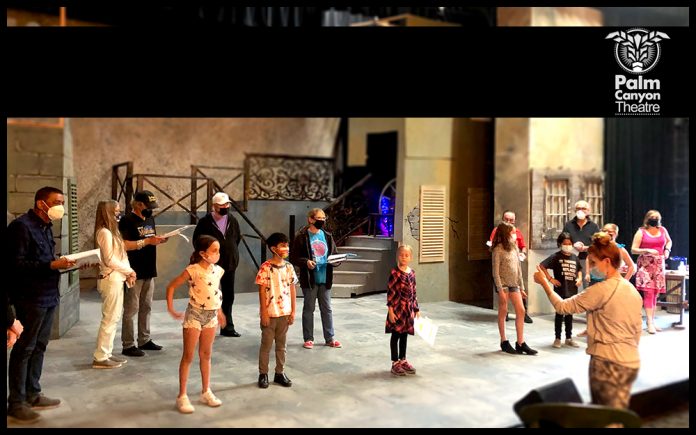 Someone once said that paradise is not a place, it’s a state of mind.  I don’t think that person had ever been to Palm Springs, California.  From Movie Stars, Greta Garbo, Frank Sinatra and Lucille Ball to Presidents Eisenhower, Reagan and Obama, Palm Springs, has been the destination spot of generations.

Cara Van Dijk’s World Premier musical, “Palm Springs Getaway,” opening on February 25th at the Palm Canyon Theatre, promises to give us a fantastical and imaginative peak into the history of this great town.

Before the world came to know this desert oasis as the “Playground to the stars,” Palm Springs, was originally the home of the Cahuilla tribe, Native Americans who settled in the desert and lived here for hundreds of years before the white settlers migrated to the area. In the late 1800’s it was discovered that the mineral springs and the dry desert air held great medicinal purposes and the early attractions included sanitoriums for tuberculosis recovery as well as the general health benefits that the desert provided for all residents.

By the 1930’s, Hollywood had discovered its playground.  Just an hour and 50 minutes from Los Angeles, the location satisfied Hollywood’s rule that required their film stars to stay within a 2-hour drive of the studios when working on a film, just in case they were needed to be called back in a hurry.  The Coachella Valley not only became a great location for filming with its wide-open spaces, but it was far enough away from L.A., that film stars could obtain the privacy they needed.  Homes were bought here, theatres, clubs and businesses established.  Palm Springs, not only has a rich history of providing a healthy living environment, but it has become a world-wide destination spot and continues to maintain so much of its charm and elegance.

Originally from the town of Winlock Washington, population 1,791 as of 2019, Cara Van Dijk moved to Palm Springs, over twenty years ago and was the first producer of “Eye on the Desert” on CBS Local 2, when Jackie Lee and Jim Houston opened the station in 2002. It was during this time that she met Palm Canyon Theatre founder and Co-Artistic Director, Se Layne. Cara has written for television, radio and newspapers and has spent recent years as an independent communications consultant working with Palm Canyon Theatre (PCT) and other clients.

Approximately six years ago Layne, expressed an interest in producing an historical musical about the city of Palm Springs.  She stated, “Throughout my life, I’ve gone to cities that have historical musicals that tell some part of their history. The Ramona Bowl and the story of “Ramona,” is a local example. We live in a tourist town, and we have an extensive, very interesting history. All these families come to town, and they don’t know anything about the town. They don’t know the rich history about the people who walked on the streets before them. They certainly don’t know who made those streets and who built the hotels. As a theatre founded on the premise of education, I thought, we have an opportunity to educate visitors about the history of our town and entertain them.”

The original collaboration with another writer did not bear fruit and so in January 2020 Cara, stepped in and wrote the original script and outline.  “Starting with a creative project that someone wanted to actually produce was an amazing opportunity,” Van Dijk commented. Stocked with multiple boxes of Good and Plenty, as an energy source, she wrote the initial outline over a three-day weekend.  Se, loved the ideas and the playwright began her journey. 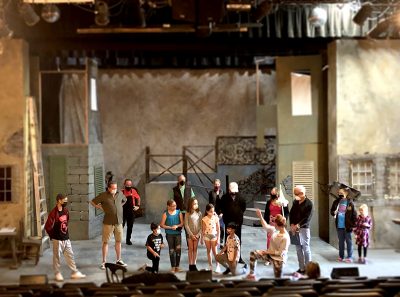 Completing the majority of the work during Covid created its own special challenges such as initial read throughs with her family and hooking up with other writers and eventual readings on Zoom.  Cara, stated that in “June-July 2021, Se worked with students at PCT summer camp to further develop some of the scenes and choreography with real people, in person… since PCT summer camp was held in person. Not much else was happening in person at that time. The pandemic definitely made this project more challenging. I would have loved to do more in-person workshopping, but as everyone has during these last two years, we’ve been flexible and we have moved forward with the circumstances and the resources we’ve had at the time.”

Palm Springs Getaway, directed and choreographed by Se Layne, begins in Los Angeles, in the 1930s, where the protagonists realize they need a “getaway” as they try to escape some mobsters set on revenge. Prompted by a poster advertising Palm Springs as the “Playground of the Stars,” Junior (Lou Galvan) and Harry (Ben Reece) set off on a time-jumping adventure reminiscent of the lighthearted, screwball comedy films of the 1930s and 40s. The duo find themselves entangled with a mysterious fortuneteller (Mary Ewing) who guides them on a field trip through the ages. 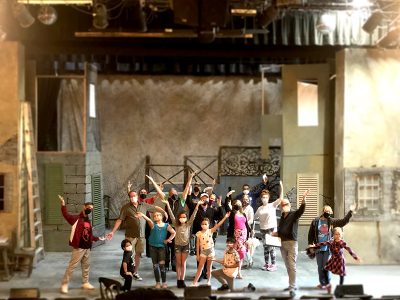 Cara, indicated that “part of the show makes the point to say that Palm Springs is resilient. As we’ve all been recently reminded during the pandemic, resilience is true of human beings, in general. Completing this play during a pandemic has taught me that I am also resilient and that I can accomplish a goal even when obstacles come along.  I recently reminded myself of the saying, “What would you do if you knew you could not fail.” Se and I have pushed each other along; we’ve been like workout partners who don’t let each other skip an exercise. Se has really shown me that in theatre, failure is not an option; the show must go on.”

Palm Springs Getaway, is a work of historical fiction.  While based on the rich and beautiful history of this diamond in the desert, it is not a verbatim historical account.  Live musical performances of familiar songs accompany this time traveling journey.  Dance, choreography and a cast ranging in ages from 8-80, will take you on an adventure that will remind you that as the song goes, “Everybody is Jumpin’ down to Palm Springs!”