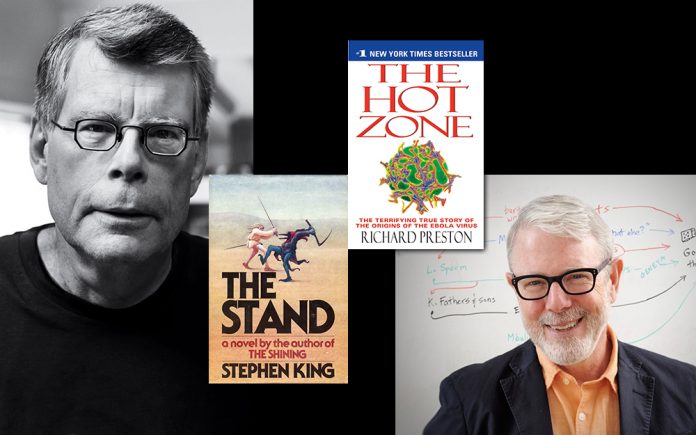 Everyone on the planet is experiencing this pandemic and it has yet to reach its zenith.  Our Coachella Valley has had more deaths than any other specific region in Southern California.  If you have become desensitized or are in denial that this global event is a serious health threat, two books — one nonfiction and the other a fictional story — can help you get perspective and an understanding how a virus can erupt, spread, and be destroyed.

Published in 1994, The Hot Zone was a huge bestseller.  Preston is an award-winning journalist and in this book reports on the appearance of rare and lethal viruses, including AIDS and Ebola that “crashed” into the human population.

The book reads like a thriller and is nearly impossible to put down!

The author begins by recounting how “patient zero” brought an unknown virus into the human population.  Preston puts the reader in the shoes of a tourist exploring a cave and explains how bat guano morphs into something deadly.

The book is divided into four terrifying, but fascinating and informative parts.

Preston also chronicles how a Level 4 Biosafety facility in Reston, Virginia circa 1989 became a hot spot when 100 imported monkeys tested positive with the Bola Zaire virus.  Concerned the airborne virus would spread into the community; the military guerdoned off the area, quarantined the workers and destroyed the animals.

The author gives evidence that “Emerging viruses” are due to environmental changes and warns there will be more.

Originally published in 1978, The Stand is considered one of King’s scariest stories and is his longest work of fiction.  It sold more than 4.5 million copies.

King revised his novel in 1990 to include 500 additional pages – 150,000 words – that were cut from the first publishing.  He brought the story up to date by a decade to include the changes in our “modern” culture.

The story is about a deadly virus that quickly turns into a global pandemic when a weaponized strain of influenza escapes a military testing facility via a soldier who tries to get out of town with his family after the outbreak.

King’s description of his fictional virus in The Stand is similar to the symptoms of Corvid 19 (see chapter eight).  The first third of the book is particularly chilling as we see how quickly it can be transmitted, spread and terminate its host.

The book then becomes a story about the world after the virus has taken out much of the population and a new dystopian society emerges — a life as terrifying as the virus itself.

Both these books offer insight and understanding how viruses function and require human beings in order to survive.

King read The Hot Zone and said: “The first chapter is one of the most horrifying things I’ve ever read in my whole life … and then it gets worse.”

Environmentalist author Bill McKibben said at the time of publishing:  “The Hot Zone is scary in deep and unsettling ways, because it is clearly an early chapter in a deadly saga that will play itself out for decades to come.”

The Corona virus is just getting started and we all must do our best to keep it at bay – make the growing curve as flat as possible — until a vaccination is obtained and there is a treatment protocol available to all.

With the publishing of these books years ago, one would think that the Federal government would have taken note and put protocols in place in the event of a global pandemic — even if only theoretically.

A virus is an amazing organism.  Understanding the nature and science of viruses and how they function is important to our survival as a species.   But so is having a view into our human nature and what can happen when a cast of characters must confront a plague and survive it.  What role will you play?

If you are home self-isolating or are quarantined, these books are still available and can be purchased online.  As frightening as they are, they are also insightful and entertaining.

Reading is a great way to pass the time at home, and The Hot Zone and The Stand are no less terrifying than the nightly news.

Be healthy and be happy.