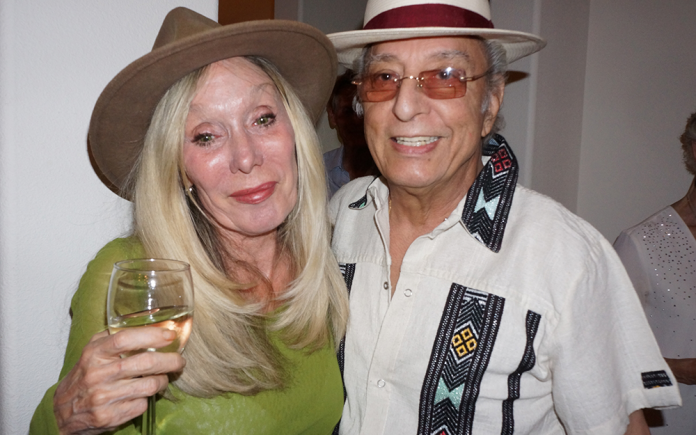 Throughout his career, Pat Rizzo has been on a musical adventure, sampling one musical genre after another and embellishing his talent, as well as the talents of others. Few performers are capable of augmenting the soul rhythms of Sly and the Family Stone and War, the Latin beat of Tito Puente or by appearing as a featured soloist in the Frank Sinatra Orchestra. His ability to make transitions from jazz to rock to latin to pop comes from a deep artistic devotion stemming from his early childhood.

As I interviewed Pat Rizzo’s sister, Rosemarie Rizzo-Tolk, she opened up the book to their amazing musical family history to share with everyone.  It gave a new meaning to the phrase; “It runs in the family”. Rizzo-Tolk has been researching her family background and was full of information.

Let’s begin with their maternal grandfather, Francesco Grande, an orchestra leader from the region of Apulia, Bari, Italy in the town of Torito. A few towns over, he married Mariangela Masciandaro, their grandmother, who lived in Gioia del Colle, which means ‘Joy of the Hill’. “My mother’s name was Maria Grande and lived in Italy with her grandparents when she was 9 years old until she was 14. She studied music under the direction of Maestro Pietro Argento and became a Concert Pianist.”

Their paternal grandfather was Pasquale Rizzo who was an orphan and lived on a farm in Piaggine, a region of Salerno, Italy. There he met their grandmother, Rosa Maria Rubano. He was a construction worker who loved to sing and play guitar. He also made his own wine in the basement of their tenement building in East Harlem. “Our father was Peter Rizzo, who was a tailor and clothing designer by trade and loved to sing. He would design my mother’s clothes and would make sure to have a tie made of the same fabric, so everyone would know they were a couple.”

Mary and Peter’s first-born child was Pat, whose birth name was Pascal Peter Rizzo. He was named after his godfather, Pascal Marsico, an attorney and later a warden at Rikers Island. He has a brother Frank, who played saxophone and his sister Rosemarie who plays the piano. “We all went to public school, PS85 in Astoria, Queens. In second or third grade, Pat tried out for the school band as a pianist, but the teacher told him that he was the only one who could play the piano. Pat cried all the way home and felt very rejected.”

He blamed his mother for not teaching him how to play another instrument. The following day, Pat returned home from school and shouted, “Mom, I’m in the band, I made it.” And with great pride he burst out, “I’m playing the triangle and it comes with a striking stick.” That was the beginning of his musical journey, after all, music was the family trade. Pat had lots of musician friends and would try various instruments. The three children attended Junior High School, JHS141 and William Cullen Bryant High School.

“My mother’s brothers, uncles and other family members were all musicians. Pat grew up in that environment. In the summertime, my mother would play the piano and people would gather on the sidewalk to listen, she had a very delicate touch. She was a very kind and beautiful woman.” Other than her mother, most of the women in the family were not musicians, but rather listened faithfully to Opera on the radio while they prepared meals.

Pat’s mom met Andy Fraga’s grandmother at a deli in Astoria. They started talking and discovered they both had young musicians in the same neighborhood and arranged for Pat and Andy to meet when they were 12 years old. The two started playing in bands for the school dances and became life long friends. After graduating high school in 1959, Pat attended the Vermont School of Music and within the first six months, he made his debut as a soloist on the flute, an instrument he had just learned. The following year, he attended the Manhattan School of Music in New York City. “After that, he was on his own. He was playing in groups, formed bands and played in nightclubs like Jilly’s”…the PanAm Hotel and many other night clubs in the city and surrounding areas.

In 1963, Pat married Karen, who was artistically talented and attended The Fashion Institute of Technology.  They lived in Jackson Heights and had their first daughter Nina followed by Lori. Ironically, Pat’s father, Peter, attended the same school at night under the name of Needle Trades.

Together, Pat and Andy opened their first recording studio in Astoria. According to Fraga’s wife at the time, Debbie, who now lives in the Desert, one of their first recordings in the late 60s, was a song called, “Pitter of the Rain”. They were working with a promoter in New York who pitched the song to a record company in Los Angeles.

According to the story Pat told his son, P.J., Peter Joshua Rizzo, they rejected the song, yet two weeks later, they heard their song played on the radio. Pat and Andy were very upset, however, they may not have known if all the paperwork was submitted properly. Let’s face it, they were very talented Musicians, not businessmen, at the time, but they learned their lesson. Although it was believed there wasn’t a copy of the record, Debbie gave Andy’s only copy of the 45 single of the song to her son, Andy Fraga, Jr., who treasures it.

In 1972, Pat and his family moved to Rancho Mirage and the rest is history. You can read all about it in The Desert Sun article written by Brian Blueskye and on Bruce Fessier’s FaceBook page, “An Appreciation of Pat Rizzo” who has been good friends with Pat for 41 years.

Almost 15 years later, Pat called Andy and told him, “Come out to Palm Springs, I need a good piano player.” The two have been performing and recording most of their lives. “Gotta’ Get Back To Brooklyn” was a song written and recorded by them and completed by Pat after Andy passed away. I remember being at Pat’s studio singing back up parts for that song. Most recently, Debbie had a conversation with Pat regarding another song he wrote, “If You Only Knew” on the Pat Rizzo and Friends CD. While everyone thinks the song is about a woman, Pat smiled and told her, “I wrote that song about my sax.” 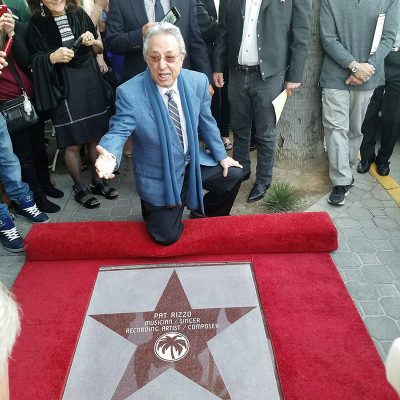 “Pat loved being a father,” said Melanie Rizzo, “He taught Joshua how to blow into a saxophone and play two chords when he was 2 years old.” Pat leaves his Musical Legacy to his son, P.J., who is another very talented musician and owns a recording studio called Riz Music Studios in Paradise, Nevada, just outside of Las Vegas. He is survived by  his daughters, Nina and Lori, his son Peter Joshua, his two grandchildren, Michele and Samantha, his sister Rosemarie, his brother Frank, and numerous relatives.

Bruce Fessier told me, “I don’t think any other musician did more for Jazz in the last half century, than Pat Rizzo did for the Coachella Valley. He owned two supper clubs that featured Jazz, Pal Joey’s and Manhattan. He was the big band leader for the Palm Springs International Film Festival and he played for more charity events than any other musician I can think of.” The Palm Springs Celebrity Jazz Festival, The LaQuinta Jazz Festival put on by the LaQuinta Arts Foundation and along with Andy Fraga, Barbara Woods and Marshall Hawkins, Pat helped found the Idyllwild Jazz in the Pines, along with other musicians and Jazz lovers from California. Stage and Production Manager and Head of Artist Security, Alex Vargas said, “Pat and Andy introduced me to Marshall Hawkins, who brought me into the festival. At that point, we all became brothers for life.”

Pat’s Fiance and Partner for 11 years, Attorney Bonnie Kramer told me, “Pat bravely fought his disease for four years with me by his side. Unfortunately for all of us, the disease won. I will miss him forever.” Pat shared his God Given Talent with the world. We will all miss him but can find him in all the music he has written, recorded and performed. Rest In Peace with Our Lord, dear friend and make Heavenly Music. We will see you again in Glory.