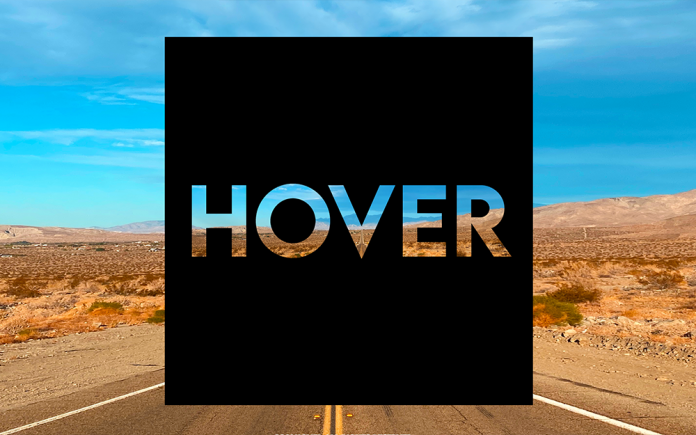 There are two things a pandemic will do to you, it will break you or it will embolden you. The Rock band Hover chose the latter and went from EP to LP in just a few short months. On April 23, 2021, their full self-titled album will drop worldwide and the band has included CDs and tons of merchandise in addition to the digital release. If that weren’t enough, the ambitious Cathedral City recording studio The Sound Hub will be presenting a listening party at Coachella Valley Brewing Co. on that Friday along with the new Giselle Woo & The Night Owls album. Flavorsome food will be available for purchase by Chef Jeshua Garza and KUMA Catering.

To further entice the party crowd, the first beer is on them! Hover has purchased the first 30 beers for the first 30 21+ individuals in attendance.

If you weren’t aware, the members of Hover are also the proprietors and operators of The Sound Hub. The full-service music studio is located at 67654 Ramon Road in Cathedral City, California. Frank Michel, Shawn ‘Stretch’ Fisher and James Hollis Eaton are excited to bring a professional sound to the listening party, “We are bringing our mammoth QSC monitors for a big listening experience!”

The above-mentioned trio has been staples of the Coachella Valley Rock scene for years now in cutting-edge bands like Burning Bettie and Hollace, the ensemble that featured the glorious vocals and musicality of our dearly departed friend and musical brother Alex Antonio Perez.

Hover is inspired at the reawakening of their music and studio headquarters. Coachella Valley Weekly contacted the band to get an update on the music and the studio.

It’s Alternative and meaningful. There are truly other fish in the sea. If you like the sound of 90’s Rock with a 2020s twist, you’ll value Hover the album. “From 2019 to 2021, and with the pandemic in consideration, we would continue to revisit the production of the Hover album as we integrated pieces and tools we acquired, and with that came a lot of exciting experimentation,” Michel explained. The singles, Bi-Polar Desert and This are lessons in memorable songwriting, arrangement and studio creation. COVID-19 no doubt made things challenging, but as Albert Einstein expressed, necessity is the mother of invention. Michel agreed. “The pandemic made it nearly impossible to continue as a band and consequently two of our members had to move out of the area. However, we were still determined as ever to complete this album and persevere.” Save Me, Look Around, Save Your Lies, Taking My Time and Hide are amaranthine in their sound. I look forward to hearing Blues, Hover and I Know Nothing at the listening party for the first time.

The space that is The Sound Hub fell into the hands of Hover in 2018 after the former owner decided to sell all his equipment and informed the band, who were rehearsing there at the time, that he was closing. In true Rock and Roll fashion, the band purchased most of his gear and assumed the lease. Since then, the band has persevered not only the pandemic, but natural small business attrition. “The Sound Hub was facing complete closure due to COVID-19. At the end of February 2020 we were finishing up recording G. Woo & The NO full-length 10-song album. At that time, they were looking forward to playing Coachella and we were focused on getting their album complete for release in time for Weekend I, Michel shared. We were temporarily closed to the public not knowing what was next. At the same time, Hover’s full-length album was also in progress. This album was a guinea pig of sorts for The Sound Hub as we had been acquiring vintage and classic studio pieces, including guitars amps, mics and processors. By the time we were done, we had created a fully functional professional recording studio focusing on classic analog techniques and gear.” Since the resurgence, The Sound Hub has made giant strides. “If you follow us on Instagram @soundhubcv you’ve seen all of our new gear and you’ll know that we have fully re-invented The Sound Hub as a major recording studio. Both albums were recorded there.”

Along with writing, recording and producing their own album, the guys in Hover were overseeing the G. Woo & The Night Owls album. “When the pandemic stopped everyone in their tracks, the process of finishing the G. Woo & the NO album Everything had no definite release date.”  The two bands grew close during the recording process and as a result forged a new path for other artists to follow. Michel is thankful. “Despite this hardship, it was a pleasure getting to work with such a talented band who shared not only a similar determination of our own, but also an appreciation of what The Sound Hub was creating. And through this process, our relationship strengthened and lo and behold, both albums would happen to get done at the same time.” And here we are. 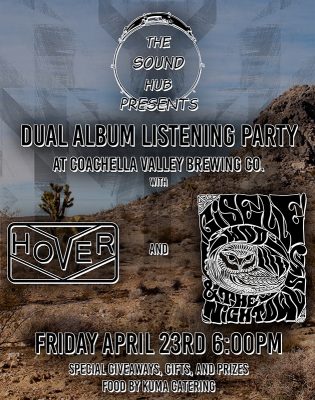 This listening party for both bands should prove to be a unique experience and falls in line with how artists in the Coachella Valley navigate the musical landscape and co-exist for mutual benefit. “As the mandate relaxed, we both felt that a dual album listening party would be the perfect showcase for both of our bands. I got in contact with Wesley Gainey at Coachella Valley Brewing Co., who was nothing but accommodating to help support and put this all together. We are all very proud and excited to be able to host such an extraordinary event locally.”

Stay up to date on all things Hover

Book time at The Sound Hub for rehearsal or recording: