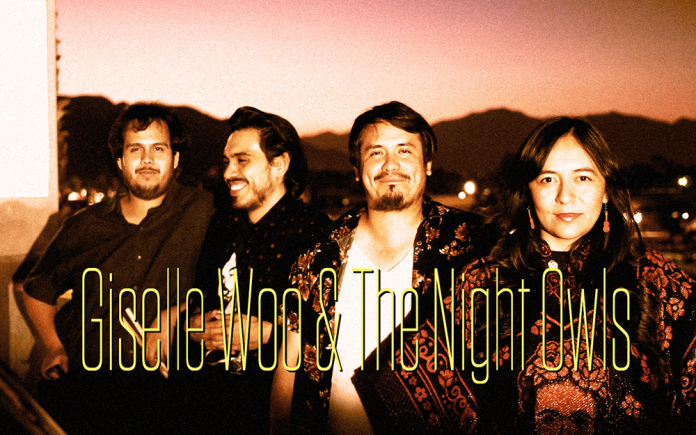 Gisello Woo has done almost ‘everything’ you could possibly imagine within our desert music community not to mention in the music world. This amazing human was scheduled to perform at Coachella 2020 with her band The Night Owls before that notch was botched by a nasty virus. Did that derail her and the band? No! Along with her individual accomplishments, Woo has done equal damage with The Night Owls over the years. With Woo on vocals and rhythm guitar, Christian Colin on lead guitar, Marco Murrieta on bass guitar and Jose Ceja on drums, the band is ready to continue to fight through the pandemic and come out of the other side better than before.

The 2020 Coachella Valley Music Award winners for ‘Best Rock Band’ Giselle Woo & The Night Owls, will be releasing their full-length album Everything this Friday, April 23, 2021, in conjunction with their brothers in arms, Hover, who will be releasing their self-titled album. To celebrate the double release, the bands will be participating in a ‘Dual Listening Party’ presented by The Sound Hub at Coachella Valley Brewing Co. in Thousand Palms, California at 6 p.m. on release day. Chef Jeshua Garza and KUMA Catering will be offering some of his signature dishes for your purchase.

The band will also be raffling off a melodica, one of Woo’s signature instruments. Each raffle ticket is $5.

Coachella Valley Weekly spoke with the band as they anticipate their new release.

CVW: 2020 was supposed to be the GW & TNO Coachella break-out performances. It had to be a setback of sorts for any artist making efforts to succeed. What has been the silver lining for the band?

Woo: “Being in the Coachella line-up in 2020 was exciting news and it prompted us to record a full-length album so we could have music out for people to find during and after Coachella. We were going to record this and master it in a time span of approximately two months and we were prepared to do so. We actually finished recording by mid-march of 2020, the Coronavirus pandemic hit and I think the silver lining for me was thinking, ’okay, now we have more time to listen and work on the album. Now there isn’t any rush’ haha. Things had halted and in many ways it was a blessing in disguise. We all adapted pretty well to the change. I’m sure individually it’s been a deeper journey of realization and growth, but as a band, I learned that we all had a mutual understanding that things were going to be different for the next few months, and that was comforting, to be on the same page with The Owls during something so unexpected and this album is what kept the flame lit! And now look, with the help of God, we’ve made it this far…after so much pain, uncertainty, and fear…the chaos that was 2020 has left me ready to give it my all, no more taking things for granted, especially things I love the most in life; my family and making music. So we have this album to give to you all. I cry when I hear songs like You’ve Taught Me Well or Sunny Days, mostly because I hear our hearts in them.”

Colin: “I think initially it felt like a setback but as a band we compartmentalized very well and converted that mindset of a setback into a work ethic for the album. We had that much more time to fine tune our album. So all that 2020 energy from start to finish is in there. Playing gig after gig in January, recording in February, the COVID outbreak in March, the uncertainty of April, and just the whole year turning into this ‘what else can we do here’ mentality.”

CVW: What do you want your legion of fans to know about the new music?

Colin: “The new record has a bit of everything for everyone. I think if you know us and have seen us live then you know we have a Reggae tune, a Blues tune, a Rockabilly tune, ballads, and Rock. People who know us will know what to expect and people who don’t will be in for a pleasant surprise.”

CVW: What are some of the coping mechanisms you have seen in each other as individuals/musicians that helped you get though the pandemic and still be here releasing new music?

Ceja: “I believe for most of us, we turned to our family or work. It was a very difficult period to adjust to the new norm and even more to suppress our musician ‘side’. This album was actually the only thing that kept us going through this whole time. We were so passionate on finishing it and given the circumstances we wanted to make sure it would be our best album to date.”

CVW: You recorded the album with Frank and James from The Sound Hub. What was it like to work with them and why was it important to keep the recording/production local?

Ceja: “Working with The Sound Hub was an amazing experience. Frank and James did an excellent job on capturing our sound but they would also go above-and-beyond to give us new ideas to bring out the most in our music. We wanted to keep it local because this music is rooted here in the valley, our inspiration comes from being here.”

Woo: “Recording at The Sound Hub in Cathedral City with Frank and James was extra-special to me because I grew up here, this is my hometown. I feel such pride being from here. So many greats have come from here, many people I admire, like Tim Bradley, Cub Swanson, Chef Gabriel Woo, Christian Sesma, Sofia Enriquez and Juan Chavez just to name a few off the top of my head. There’s something magical about Cathedral City and I’m beyond happy with our decision to work with Frank, aside from him having his studio in Cathedral City, his knowledge on gear and ‘old school’ Rock recording methods is what captivated the Owls and I. I loved watching them geek out on music stuff, haha, it was just so impressive. I knew we were in good hands.”

CVW: This ‘Dual Listening Party’ is a pretty innovative concept and is a great representation of how we do things in the ‘Dirty D’. Giselle, you are the ultimate ‘desert delegate’. This is an emotional investment for you isn’t it?

Woo: “What’s a thing ‘night owls’ do in the air? They ‘hover’! What a journey it’s been! This awesome ‘dual listening party’ idea by our friends at Hover and The Sound Hub is what happens when you let nature take its course…when you let destiny take its course…when you let life take its course. Trust in yourself and in those around you that want nothing but the best for you and things seamlessly fall into place. It’s going to be emotional for me to finally share with you what Chris, Marco, Jose, Janine, Mikey and Frank made in the spring of 2020 and what eventually extended throughout the pandemic to this day. So much has happened, so much seems different, but this album is one of the most beautiful things that came out of it all. I’d love to thank my Grandma Goyita, RIP, for always encouraging me to use the gifts that God gave me which leans heavy towards the arts and music department. I love you! I know you’re proud of me! Thank you to my family and dear friends, and thank you to our fans!”