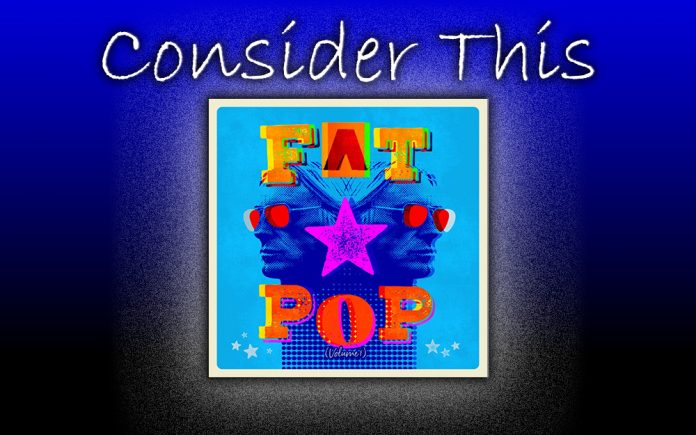 “Who’s always there when you really needed them

Who’s been a friend when you really needed one

Who gives a fuck when no one else does?

Who gives a fuck when no one else does?

That’s Paul Weller expounding on the power of music on the title track of his brand spanking new album, “Fat Pop (Volume 1).”

Paul Weller, in case you aren’t aware, was the leader of one of England’s most seminal Punk bands, The Jam. In five years, from 1977 to 1982, over the course of six studio albums, a couple of EPs and a live effort, the trio stormed the British charts, most of the time debuting at #1. Their sound was a heady mix of Paul’s earliest influences, Beatles, British Invasion bands and Tamla-Motown, wrapped in snarling and succinct, primitive Punk packaging. They also almost single-handedly reignited the Mod movement that first took hold in the ‘60s.

At age 24, Paul walked away from The Jam, intent on following his muse. He formed The Style Council with keyboard player Mick Talbot. Eschewing his former band’s staccato snarl, he adopted a sound that leaned toward Sophisto-Pop, Soul, Funk and Jazz. Their music presaged artists like Sade, Everything But The Girl, Blow Monkeys and Swing Out Sister. Between 1983 and 1988, the pair, augmented by an everchanging cast of talented musicians, released an EP, five long-players and a live record. As with The Jam, Style Council albums also became firmly entrenched at the top of the British charts.

Paul pulled the plug on The Style Council in the late ‘80s. This time he took an extended break from music, (which he began playing professionally as a teen, playing working-man clubs in his hometown, Woking, back the early ‘70s), and spent time with his wife and growing family. At the start of the new decade he began road-testing new solo material on tour.

His self-titled solo album arrived in 1992. Embraced by fans and critics alike, it was a muscular synthesis of his myriad inspirations. Toward the end of the 20th century, younger, chart-topping bands like Oasis, Blur, Ocean Colour Scene and Pulp, began name-checking Paul as a huge influence. It was during this era that he earned the affectionate sobriquet, “The Modfather.”

In the ensuing years there have been 15 solo albums, six EPs, several live records and even a soundtrack score. Continuing the tradition begun during The Jam years, nearly every studio effort landed in the British Top 5. His last album, On Sunset debuted at #1 and topped myriad critics’ polls in 2020. Last year, as the pandemic hit Great Britain, Paul was getting ready to release On Sunset, and was keen to tour the world behind it. When those plans were scuttled, he set his disappointment aside and began creating a new record from scratch. The result is a 12-song set cheerfully entitled Fat Pop (Volume 1), (he’s leaving room for future editions).

It’s immediately clear from the album’s opening cuts that Paul continues to indulge his musical wanderlust. “Cosmic Fringes” is powered by a programmed, four-on-the-floor beat, whooshy synths, feral bass lines and slashing, static-y guitars. Acidulous lyrics take aim at internet trolls who feel free to take potshots, cloaked in the armor of their anonymity; “I’m not society’s problem, I’m entirely home-grown, I’m not a product of anything, I’ve never been or felt so alone.” Slingshot guitar riffs ricochet through the break, skirting stinging synth salvos. The final verse finds this keyboard warrior momentarily vanquished, but ready to refresh and reboot; “I’m a sleeping giant, waiting to awake, stumble to the fridge and back to bed again.”

Conversely, stripped-down and sinewy, “True” is a proper banger that echoes the crisp economy of his Jam days. Shards of guitar collide with boinging bass lines, thumpy piano and a jittery beat. A proper duet, Paul trades verses with Mysterines vocalist Lia Metcalfe and they intertwine on the chorus. Cryptic lyrics parse the intricacies of romantic commitment and the temptation of infidelity; “I never said I could find just what it means to be true, I never said it was me, I never said it was you.” Serpentine riffs snake through the break, shadowed by smoky tenor sax, billowy piano, sunny trumpet and lowing baritone sax, bookended by an insistent handclap rhythm.

Firing on all cylinders, Paul hopscotches through a surfeit of styles here. Something of a cerulean soundscape, “Shades Of Blue” employs a tick-tock beat, stately piano runs, jaunty bass lines, winsome melodica, sugar rush guitars and rattletrap percussion. Co-written with his eldest daughter, Leah, her chorus completed his verses. The lyrics embrace a carpe diem philosophy, no doubt inspired by the cruelties of Covid; “Spend all your life just to find out all that matters is close to you/The people you know, the things that you show that shape our views.” Adding to the track’s spiritual heft are Leah’s celestial background vocals.

“Moving Canvas” is a bit of a Bluesy thump, accented by braided guitars, swirly Hammond organ colors, feathery Rhodes, knotty piano, crisp percussion and a conga-riffic beat. Paul paints a vivid portrait of a conflicted anti-hero; “Upon himself he paints a dream, but the picture that you see is the one of your design, it’s the one you’d really be, just like him, so wild and free.” The arrangement swells to include a trumpet fanfare along with baritone and tenor saxophone, before downsizing to just acoustic guitars, muted keys and infectious conga groove.

Then there’s the slightly Hippie-fied feel of “Cobweb/Connections.” Rippling acoustic guitars partner with courtly Spanish filigrees, whispery keys, swelling strings, loose-limbed bass and a handclap rhythm. Lyrics address the misanthrope within us all, suggesting we let go of old grievances; “So I say change today, save yourself and all those around you too/And all the pictures you’ve been shown, were made from paper not from stone, but only you can now decide how old and new worlds will collide.”

Both “Glad Times” and “Failed” speak to the creeping sensation of marital ennui. On the former, vroom-y guitars ride roughshod over a creamy, Philadelphia International-flavored string section. Lush Wurlitzer, Moog and Mellotron dart throughout the mix, anchored by angular bass and in-the-pocket percussion. Lyrics hint of a communication breakdown (not in a lighthearted Led Zeppelin way); “I thought I’d lost you for a while, couldn’t find you in a crowd, hey baby, where you been, I get so lonely waiting for you, thought you didn’t love me anymore.” On the break, a percolating horn section mirrors the spousal angst. The ache in Paul’s swoony croon is palpable, as he vows to persevere; “I’m gonna keep our eyes looking for the good times, trying to stay high on looking at the glad times/Gonna keep my head up looking for the good times, biding my time waiting for the glad times.”

The latter is slightly more introspective. Strummy acoustic guitars slip-slide around searing electric riffs, shimmery keys chugging bass and a propulsive backbeat. Lyrics offer a measure of accountability, running through a personal inventory of past flaws and foibles; “What kind of person have I really been? I never took it, I just followed a dream, and all the things I just don’t get, and all the words I never meant, and all the things that made no fucking sense, I failed.” A slashing slide guitar solo on the break adds a bit of metallic crunch to the proceedings.

On a record packed with stellar tracks, four songs stand out. First up is the slinky title track. Shaker percussion connects with brawny acoustic guitar, stealthy bass lines, Chicken-scratch electric guitars, a wash of Moog, synths and “mad” Hammond B3. Paul wraps his Woking rasp around lyrics pay homage to the essential power of music; “Who brings the beat when the place is jumpin,’ who brought the word and is saying something/Who hangs your dreams up every night, and wakes you up with sweet delight, who’s never ever let you down, who’s always there when your life is dark Ah Fat-Pop!” Squiggly synths and skittery guitar add a bit of dissonance to the proceedings, just in case you were under the misapprehension that Paul was verging on the sentimental and waxing rhapsodic.

Paul’s melancholy croon lattices over willowy guitars, pinging keys, bass and a ticklish beat on “In Better Times.” The arrangement expands and contracts across a meandering melody and lyrics that ultimately reveal “it’s ok to be yourself.” A burnished sax solo threads through a tapestry of sparkly piano, nimble guitar notes and a snappy beat, the entire enterprise nearly powers down completely, before roaring back to life.

Taking a page from Curtis Mayfield and Marvin Gaye, “That Pleasure” is a veiled response to the murder of George Floyd and the Black Lives Matter Movement that gained traction during the pandemic. Like his musical mentors he swaddles his anger and heartbreak in layers of wah-wah guitar, cascading strings, pillowy keys, sleek bass and an urgent handclap beat. Looking forward, he advocates for social justice; “Get up and get involved, it’s now or never, it’s time to make that change, get in this together/Look beyond differences, see the connections, all as one created, no exceptions.” With the world at a tipping point, it’s a powerful message.

The record closes on a pensive note with “Still Glides The Stream.” Dour piano chords are matched by swelling strings, plangent acoustic guitar, beatific harp and a rock steady beat. Paul’s no Pollyanna, he doesn’t tell us to count our blessings, but offers this caveat; “Be careful with what you ignore, look for greatness in the small.” The song echoes the pastoral grandeur of one of The Jam’s final singles, “The Bitterest Pill.” The salient difference is where once he looked inward, trying to reconcile a failed romance, these days his view is more global. It’s an elegant finish to another brilliant effort.

Paul wrote the songs and recorded his parts at Black Barn, the studio he built his property just outside London. He then sent his parts through the interwebs to his longtime backing band, guitarist Steve Craddock, bassist Andy Crofts and drummer Ben Gordelier. Jan Stan Kybert, who has been producing Paul Weller albums for nearly 20 years, helped corral a cadre of familiar musicians to embellish the sound, including Anth Brown on guitar, Tom Doyle on Wurlitzer, electric piano and drum programming, Tom Heel on Moog and backing vocals, Steve Pilgrim on drums. Charles Rees added drum programming, synths, bass and Moog and Paul “Lefty” Wright played Esraj. The horn section was comprised of Steve Trigg and Dave Boraston on trumpet and Anthony Gaylard, Paul Speare and Phil Veacock on assorted saxophones. Jacko Peake contributed flute. The string-section included violinists Kotono Sato and Antonia Pagulatos, cellist Katy Cox and Stella Paige on viola. There were also some special appearances from Paraorchestra, Britain’s integrated orchestra of disabled and non-disabled musicians, as well as the legendary Andy Fairweather Low, plus Paul’s daughter Leah on backing vocals, and his oldest mate, Steve Brookes on slide guitar.

Not surprisingly, Fat Pop debuted at #1 on the British charts. In interviews The Modfather has stated his intent was to make a record where each song could be released as a single. Created on the fly, recorded during a worldwide health crisis, and a racial reckoning, he has effortlessly achieved that goal.