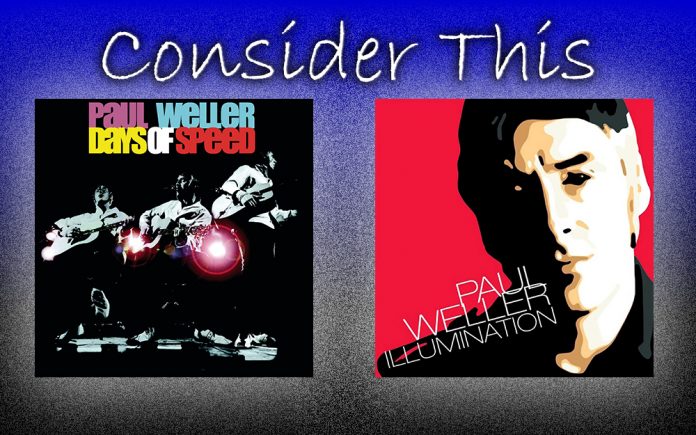 Paul Weller, affectionately nicknamed “The Modfather” a few decades ago, originally gained fame as the sonic architect of The Jam. He solidified his authenticity. with his second band The Style Council. But he completely came into his own as a solo artist. The Jam was formed just ahead of the Punk Rock revolution that hit Great Britain in 1977. Originally a quartet that trimmed down to a three-piece, their sound was a heady brew of Beatlesque/British Invasion Pop, hard-charging R&B, a soupcon of Punk rebellion and Mod revival panache. Through five studio albums, assorted EPs and a live effort, they consistently landed at the very top of the charts in England. That popularity was never been matched in the U.S., although they gained a foothold on the charts over here in 1982, with the irresistible single, “A Town Called Malice.”

By then, Paul was ready to move on. Quitting The Jam, he partnered with ex-Merton Parka keyboardist Mick Talbot and together they became The Style Council. Their sound was a sleek amalgam of Jazz and Soul that was massively successful in the U.K. and earned them a couple of minor hits in the U.S. As the ‘90s dawned, Paul launched his solo career. On his own, he incorporated all he had learned fronting two wildly successful bands, creating a sharp distillation of all that had come before: his reverence for John Lennon, Pete Townshend, Motown, sultry Jazz and Curtis Mayfield. In the ensuing years he has released 16 studio albums, culminating in this year’s expansive Fat Pop, as well as four live efforts and a couple of compilations. In Great Britain he he remains a surly elder stateman, his albums consistently debut in the Top 10. Lionized by a younger generation, he is revered by Britpop bands like Oasis, Pulp, Blur and Ocean Colour Scene He’s also cultivated a passionate fan base in America.

Recently the cool kids at Craft Recordings have issued Paul’s sixth solo effort, Illumination as well as his first live recording, Days Of Speed on vinyl for the first time. Both albums originally arrived at the dawn of the 21st century (2002 and 2001, respectively) and find the Modfather settling into role as a Punk elder-statesman.

The first three tracks on Illumination effortlessly leapfrog through a plethora of styles. First up, “Going Places” opens with lush, acoustic riff-age, plinky, plangent piano notes, angular bass lines and a plunky beat. Paul’s Soulful croon is plush and wanton, thick with romantic desire. Buoyant lyrics are uncharacteristically giddy, contemplating a new passion; “More than just a heart-beat from the city floor, more than just the bright lights that led me to your distant shore/I’m keeping my head up and out of the sand, way ‘cross the rooftops I’m gonna plan our escape ‘cos we’re going places we never dreamed we could, through all kinds of changes, and still our hearts beat closer more and more.” Guitars sparkle and chime, ushering the song to conclusion.

As though someone’s flipped the radio dial, “Bullet For Everyone” careens out of the speakers as the sweet notes of “Going Places” recedes. Junky, Glam-tastic guitars ride roughshod over fluttery Hammond B3, brittle bass lines and a stompy backbeat. Paul’s indignation shines through as he spits verse upon verse, excoriating a government that prioritizes weaponry over citizenry; “There are holes in the divisions between the haves and who-have-nots, there’s a bomb for every city, now we don’t know where to stop, and they say there’s no provisions, but when it comes to the gun, there’s a bullet for everyone.” Guitars strafe and skronk, fuzz and feedback on the break, like aural bullets were whizzing by, and the result is positively thrilling.

Meanwhile, “Leafy Mysteries” fuses the acoustic jangle-pop of the first track, with the blistering urgency of the second. Incandescent acoustic licks partner with rippling electric riffs, tensile bass and a throbby big beat. Paul’s feathery voice floats on top, as lyrics offer a potent paean to the power of nature; “And all these leafy mysteries and the changing of the seas, and all the secrets of the tide, just open up the world I find-so small to me when there’s so much to see.” As the arrangement gathers momentum on the break, Paul uncoils a series of explosive, WHO-inspired power chords that detonate like smart bombs.

As a working-class kid from Woking, Paul’s songs have always been critical of life’s inequities, as well as the yawning chasm between the haves and have-nots. Indignation and optimism are on full display on both “Bag Man” and “Standing Out In The Universe.” The former opens with intimate acoustic notes so close, you can hear fingers traversing the frets. Shivery electric guitars, celestial strings and a shuffle rhythm kick the song into gear. First-person lyrics find Paul slipping into the skin of homeless bag man, trying to earn his keep; “You may find me on the street somewhere, I may be floatin’ round the bins, I’m looking for something, I don’t know what it is.” The melody of “Standing Out In The Universe shares some musical DNA with the Thunderclap Newman classic, “Something In The Air.” It’s powered by spiky guitars, thrumming bass lines, billowy Hammond B3 and a propulsive beat. The lyrics are a call-to-arms, a passionate plea for some peace, love and understanding in a post 9/11 world; “Sending out to the universe, that hope is on its way, now’s the time to open eyes and realize that we’ve all got parts to play/Now the world’s at a place, people torn and disgraced, there’s no time- there’s no time- like today, to feel the winds of change.” A string section see-saws behind cantilevered guitars, as sanctified backing vocals add some Gospel heft.

Throughout his years in The Jam and The Style Council, Paul rarely wore his heart on his sleeve, but that seemed to change as his solo career progressed, beginning with “You Do Something To Me” from 1995’s Stanley Road album. The best tracks on Illumination toggle between the deeply personal and the politically charged. “It’s Written On The Wind” announces it’s majesty with a brassy FX fanfare that walks the line between Herb Alpert’s Tijuana Brass and au courant Electronica. The sound smorgasbord expands, incorporating Psychedelicized Hammond B3, vroom-y bass, gritty guitars and a kick-drum beat. The lyrics seem to posit that true love is an inalienable right; “It’s written in the wind that we’re two, carved out in the sand that we’re real/It’s lit up in the stars that we’re true, we’re destined in the sky to be glad.” The song subtly shapeshifts on the break, locking into a sinuous groove that recalls the greazy Soul Gumbo of Dr. John.

Meanwhile, “All Good Books” reminds us not to judge a book by its cover, whether it’s the bible or the Koran. Strummy guitars connect with woozy electric piano, knotty bass lines and a backbeat so taut, you could bounce a quarter off of it. The breezy vibe belies trenchant lyrics that note “If Jesus could hear us now, bending all his words, of which he’s proud, but the carpenter was only making invitations, voicing the opinions of others…If Mohammad could see us now, shaking down the walls but not as prayer, and the power games that play out, and the lies that come within out, and the sacrifice that you make out, against all we are worth, all we hold dear, all that is true, all that we love, all that we dream of, all that we give.” Sweeping piano runs and churchy keys give the song some ecclesiastic elasticity

Finally, “Who Brings Joy” is swoony and Soulful, blending sun-dappled guitars, swirly keys and a chugging beat. All artifice is stripped away, and Paul eschews equivocation and speaks from the heart; “In your eyes lie a heaven, in your voice sweet caress, it is you who takes over, whose gentle arms I rest, you who brings joy into the world.” Cascading guitar notes saturate the break. And the guy who has always seemed one cool remove away, has learned to embrace happiness.

Other interesting tracks include “Spring At Last” a sylvan instrumental that arrives midway through the record and cleanses the palette like a musical sorbet. Then there’s the smoky Jazz of “Now The Night Is Here.” The sludgy “Call Me No. 5” finds him duetting with Stereophonics’ frontman, Kelly Jones. His distinctive Welsh rasp pairs nicely with Paul’s lip-curling drawl. On “One X One” his gruff vocals crests over an arrangement that stitches together a rich tapestry of filigreed acoustic licks, whoosh-y keys, plucky strings, stinging electric riffs, Country-comfort piano and a metronomic beat.

The record closes with the title track, a mordant mediation on the power of love. Stripped-down, spare and elegant, it features only jaggy acoustic guitars and Paul’s stentorian croon. Austere lyrics offer up a final encomium; “The prayer I ask is where I’m going to, without your undying love, I’m as worthless as a cold, cold sun, that shines for no one-at all.”

While Illumination is wide-ranging and inventive, Days Of Speed is spartan and bare bones. A live, 18-song set, it was culled from a series of shows recorded in London, Berlin, Southampton, Madrid, Dornbirn, Wolverhampton, Manchester, Rimini, Munich and Dublin in 2001.

While the tracks were recorded in different cities and venues, the set unfurls seamlessly. It not only offering myriad selections from his first five solo albums, but manages to include a few favorites from The Jam and The Style Council. The LP is dotted with deep cuts like “Brand New Start” and “Out Of The Sinking.” He also shines on the title track from the Wildwood album as well as a nakedly emotional version of “You Do Something To Me,” from Stanley Road.

Paul throws in a couple of B-sides like “The Loved” and “Everything Has A Price To Pay.” But the songs that truly beguile are Style Council’s courtly “Down In The Seine,” and the rollicking “Headstart For Happiness.” As well as the brittle beauty of Jam cuts like “English Rose,” “That’s Entertainment” and “A Town Called Malice.”

Although these albums were originally released 20 years ago, the music remains as fresh and immediate now as it was at the turn of the 21st century. Paul Weller’s prowess was in full effect. The proof is in the grooves.