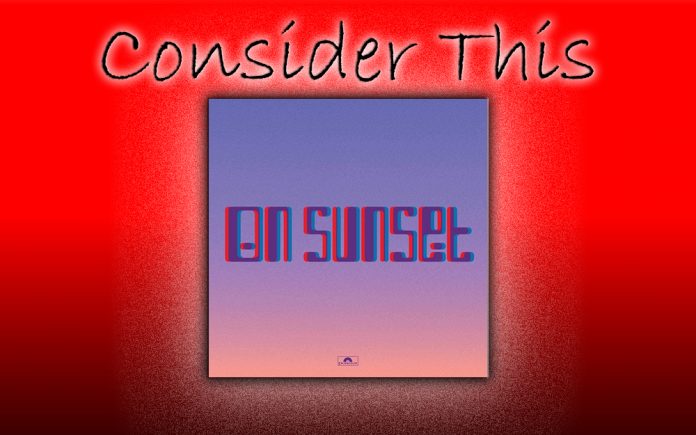 Punk Rock exploded in Great Britain back in 1977. The Inaugural class included The Sex Pistols, The Clash, Elvis Costello, The Damned and The Jam. Initially dismissed by the music industry as unlistenable, Punk was torn and jagged, sometimes devoid of melody. It featured staccato guitar riffs and bludgeoning beats. Vocalists didn’t so much sing, as spit out lyrics that railed against authority, conformity and the status quo. Their look was as alienating as their music, Punks spiked and mohawked their hair, safety-pinned their faces and strategically ripped their clothes.

Jam front-man Paul Weller had been making music semi-professionally since he was 14 years old. Born in 1958, he grew up in Woking, a working-class town in Northwest Surry. His father, John, drove a taxi, his mother, Ann, was a homemaker. Growing up in the ‘60s, he displayed an affinity for music early on. Obsessed with British Invasion hit-makers like The Beatles, the Small Faces and the Who, he was compelled to dig a little deeper and explore the musical touchstones of his heroes. He became a true connoisseur of Motown, Curtis Mayfield, Stax-Volt, Northern Soul and the Blues.

The first incarnation of the Jam formed in 1972 and included his best mates, Steve Brookes on lead guitar and Dave Waller on rhythm guitar. Paul tackled bass and vocals. Their line-up was made complete when Rick Butler stepped behind the drum kit.

With Paul’s dad acting as the group’s manager, they began booking gigs in local working-men’s clubs. They honed their skills covering songs by the Beatles, and the Who as well as putting their spin on hits from Motown and classic R&B songs. When Steve and Dave decided to leave the Jam, guitarist Bruce Foxton was recruited. Rather quickly, he and Paul switched instruments and began integrating Paul’s original songs into their sets. As their protean talent began to shine through, their popularity grew.

The Clash invited the Jam to open for them on their White Riot tour. Soon the trio inked a record deal with the Polydor label and their debut, In The City arrived in May, 1977. It was an astonishing introduction. Sharply defiant lyrics articulated the restless angst that defined the era. But Paul’s melodies pushed past the snarled, spit-soaked primitivism of his peers. Instead, he embraced the crisp songwriting style employed by Pete Townshend from the Who and Ray Davies from the Kinks, as well as Motown’s resident Bard, Smokey Robinson. Quite by accident, Jam songs became the soundtrack to the Mod Revival of the late ‘70s.

Between 1977 and 1982, over the course of six studio albums, three EPs and a live record, the Jam ruled the airwaves and remained at the top of the charts in Great Britain. Critical acclaim was matched by massive commercial success, a feat they never managed to replicate in America, despite relentless touring. In the summer of 1982, their Motown-inflected working-class anthem, “A Town Called Malice” gained a foothold on the American charts, but it was too little, too late for Paul, who was already looking for different musical challenges. At the close of 1982, they broke up.

Paul quickly moved on, forming The Style Council with ex-Merton Parkas keyboardist, Mick Talbot. Their sound reflected his deep affinity for ‘60s Soul and his newfound appreciation for Jazz. It also anticipated a new smooth, Cocktail Soul/Jazz amalgam that proved wildly successful for artists like Sade, Everything But The Girl and Swing Out Sister.

Even as the Style Council’s melodies offered up an ambitious combo-platter of Jazz, Soul, Funk and Hip-Hop, Paul’s lyrics continued to mirror his Leftist politics, quietly excoriating Margaret Thatcher, racism and ceaseless unemployment. Their first long-player, entitled Café Bleu in the U.K. and My Ever-changing Moods in the U.S. arrived in the summer of 1984. Surprisingly, they scored a couple of minor hits, the title-track and “You’re The Best Thing,” that climbed the charts in America.

Not unlike the Jam, Style Council released five studio albums, in as many years. Each record seemed to shift away from the sophisto-pop sound they had pioneered, and became more experimental. By the end of the ‘80s they had started to incorporate trace elements of Techno and House into the music. About the time their label dropped them, Style Council quietly called it quits.

Paul took a couple of years to spend time with his growing family and in 1992, he embarked on a solo career. His eponymous debut was released and it felt like a revelation. Somehow, his Punk/Pop predilections coalesced perfectly with his Soul/Jazz leanings, creating a potent musical alchemy.

Just as Pete Townshend served as a musical touchstone for him during the Jam era, Brit-Pop sensations like Oasis, Blur and Ocean Colour Scene had pledged undying fealty to Paul Weller. To that new generation of hit-makers, he was affectionally christened “The Modfather.”

Paul’s next three records, Wildwood, Stanley Road and Heavy Soul were simultaneously concise and expansive, integrating rustic acoustic instrumentation as well hints of Folk, Funk and a heavy dose of Psychedelia. Since the turn of the 21st century, he has been wildly prolific, releasing albums at a furious clip, Heliocentric, Illumination, Studio 150 arrived before 2005. Three years later 22 Dreams was released. After a two-year interval, Wake Up Nation appeared.

In 2012, he married his second wife Heather, and they welcomed twin sons, John Paul and Bowie, (all told, he has eight children). That same year he released Sonik Kicks. The stunningly satisfying Saturn’s Patterns dropped in 2015, followed by the rollicking A Kind Of Revolution in 2017. His last album, True Meanings, was a stripped-down acoustic set that reached #2 on the U.K. charts. Now he is back with his 15th studio effort, On Sunset.

The album opens rather ambitiously with “Mirror Ball.” Clocking in at nearly eight minutes, this song is simply everything. An aural banquet, a multi-course meal, a decadent dessert, an overture and a curtain-call, all rolled into one. The track opens tentatively, with vroomy keys, tinkly piano and plush synths. As Paul’s tender croon filters in, filigreed acoustic guitars and a heartbreak beat are added, as the arrangement achieves lift-off. As the tune progresses, buzzy guitars and whirligig percussion enter the fray. The lyrics seem to speak to a higher power, so sort of Disco deity; “Mirror ball you shine so bright, illuminate the ways of our sight/’Til everyone’s a shining star…In every silver sky I see you, the streets that pass me by I feel you in everything.”

The album hopscotches through a plethora of styles. “Equanimity” is a sharp synthesis that toggles between traditional British Music Hall and the more Folksy sounds of Klezmer. Over a swaying shuffle rhythm, prickly guitars, iridescent keys, courtly violin, sonorous saxophone and a cheeky clarinet swirl around Paul’s playful vocals. The lyrics are surprisingly self-help-y; “So, as equanimity shows, to try and stay in control and not fall apart/Slow, the ataraxy will grow, as the shepherd has shown gentleness and kindness.”

There’s a TSOP vibe to “Old Father Tyme.” Punchy piano notes collide with a chugging backbeat, glassy Mellotron, propulsive, Philly-Soul flavored horns, chicken-scratch guitars and angular bass lines. Prescient lyrics seem to mirror the complicated days of 2020; “In this time of confusion, hang on to what is real, hail the love all around us, see how deep it feels.”

The album’s best tracks simply bristle with authority. Had Marvin Gaye and Quincy Jones ever collaborated, it might’ve sounded like “More.” Modal guitars ebb and flow over spidery bass lines and an insistent, tick-tock beat. Paul trades verses with French chanteuse Julie Gros. The instrumentation expands, adding sawing strings, sprightly horn accents and willowy woodwinds. Despite the sleek and sensuous groove, the lyrics are less about seduction, and more philosophical. Paul questions the collective  idee fix that mass consumption soothes the soul; “The more we get, the more we lose, when all is ‘More,’ it’s more we choose/There’s something else in store, that keeps me running down that road, keeps me running….to an unknown place I think is more.” On the extended break, acoustic guitars dart and pivot around snake-charmer flute, fluttery keys, feathery strings and brazen tenor sax, building to a stately crescendo. A craggy guitar solo erupts before the entire enterprise quietly powers down.

“Baptiste” is fueled by serpentine guitars, splintery keys, lush Hammond colors, rumbling horns and a relax-fit Bo Diddley beat. Paul’s vocals are soulful and a touch beatific as he genuflects to his one true religion; music. Taking a dip in the sanctified sounds, he is cleansed and purified; “I never used to pray, I never been to church, but when I hear that sound, it goes straight to my soul.”

Finally, “On Sunset” is the album’s magnum opus. The song was inspired by a visit to see his eldest son in Los Angeles and a stroll down the fabled boulevard for the first time since he originally performed in the U.S. with The Jam. Jangly acoustic guitars and a breezy beat conjure up images of swaying palms and dry, Santa Ana winds.

The arrangement accelerates slowly adding thrumming Mellotron, shimmering strings, brittle electric guitars, blustery horns and a sturdy, conga beat. Paul retraces old steps, touring the landmarks of his youth; “And the world I knew has all gone by, all the places we used to go belong to a time, someone else’s time, another life/No long goodbyes, I have no point to prove, take a drink in the Whisky, moved on to the Rainbow.” Languid and laid-back (don’t worry, he hasn’t morphed into Jimmy Buffett), the song winds down and fades into the smoggy ether.

Other interesting tracks include the uncharacteristically buoyant “Village,” wherein the restless Modfather learns to slow his roll, and, as smooth Soul singer William DeVaughan, Jr. once advised, “be thankful for what you got!” Then there’s the piano-driven, mid-tempo groover, “Walkin’,” and the slightly sitar-iffic throb of “Earth Beat.” That song segues into the album’s closer, “Rockets.” Anchored by a thudding beat, shadowy acoustic guitars wash over “mad” Hammond, piano, Mellotron, ambient synths and a subdued horn section. Paul’s rueful vocals feel positively Bowie-esque, which feels wildly apropos since the opening couplet; “He went off, like a rocket touched/Way up in the sky, beyond the bars in our minds,” seems like an homage to the Thin White Duke. It’s a quiescent end to a dazzling effort.

If you squirreled away a little extra from that April stimulus check, pony up the dough for the deluxe edition of the album. It includes remixes of “On Sunset” and “Baptiste,” as well as the skronky instrumental pulse of “4th Dimension.” Worth the price of admission is the final extra, “Ploughman.” A rough and tumble ‘60s rave-up, it shares some musical DNA with Iggy Pop’s “The Passenger.”

On Sunset entered the British charts at #1. The record is a smorgasbord of sound and color, by turns, restless and reflective. Back in 1977, Paul Weller harnessed the anger, angst and energy of Punk. He forged a career that continues to blur the lines, making music that never gets old.