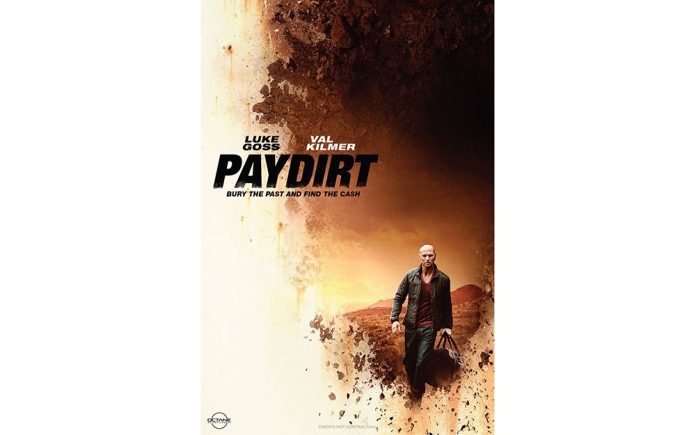 The Coachella Valley continues to act as a backdrop of motion picture magic as more film crews set their sights on the desert to shoot their movies. The latest cinematic venture comes in the form of the crime heist thriller, Pay Dirt, starring Val Kilmer (Tombstone, Top Gun, The Doors) and Luke Goss (Hellboy II: The Golden Army, Blade II).

Co-producer of the film, Rich Henrich, has been in the film industry for over twenty years, becoming an Emmy-award-winning producer and a professor of film at multiple colleges across the nation.

“It wasn’t difficult casting the film, but actually getting Luke Goss and Val Kilmer to say yes was a huge help. Christian had actually worked with Luke before in the Night Crew in 2015—which was also filmed in Coachella,” said Henrich.

Henrich’s role as a co-producer was made even more enjoyable by getting to shoot and film in the Coachella Valley, as he considers California to be one of his favorite places of residence.

“When you’re producing it’s a constant thing. You’re managing a lot of details and moving parts. This project was great for me because it was an opportunity to do something local. It’s ending the year on a high note when you have a community-based project with a number of people who know how to make movies,” stated Henrich.

Henrich went on to reference the fact that the state of Georgia is the number-one production center for film and television now, forming the primary filming location for hit shows like The Walking Dead and a number of Marvel Studios productions including Avengers: Infinity War and Avengers: Endgame.

“If you look at the history of film across the country, you’d be surprised to see how many films are no longer being made in California. It’s interesting to be in a state like California where there’s so much history of the film industry. The creation of film and television is rooted in Hollywood and Los Angeles, so it’s nice to be able to make a film in your own home turf,” explained Henrich.

This expansion of the film industry in the desert not only creates more industry within the Coachella Valley, but also provides a resource for people who are not able to make it out to Los Angeles to shoot a film. Henrich also emphasizes the importance of multiple jobs within the film industry.

Nearly 70 percent of the crew is made up of Coachella Valley natives, including interns from the film program at College of the Desert.

Former KESQ reporter and Green Book star Mike Hatton is also pleased with the opportunity to film in the Coachella Valley, dubbing it a perfect place to shoot a film.

“Jack Campbell with Octane Media approached Christian Sesma with an idea for making a movie and having it done by the end of the year. This was back in September, so we needed to find somewhere that we could do this quickly and affordably and the

Coachella Valley was the perfect spot with a lot of opportunity and people who could call in favors, along with a community that is filled with support,” explained Hatton.

“When people think of careers in film, they often just focus on actors and directors, but there are so many more roles to fill. Whether you are in set production, costume design, or producing, there is a place for talent like that when making a movie,” said Henrich.

Henrich reveals that there is a desire to have a local premiere of Pay Dirt in early summer of next year.

“The entire crew is thankful to the city of Coachella and all the other private businesses and residences that have helped us during the filming process and supported our work,” stated Henrich.

Coachella Valley Community members are being asked to participate and fill downtown Coachella as background extras in a Dia De Los Muertos, or Day of the Dead, parade scene in the new feature film.

People of all ages are encouraged to arrive, wearing “Day of the Dead” festive face paint, masks, and costumes to bring to life the traditional celebration.

Extras will meet at City Hall in Coachella at 5 p.m. on Saturday, December 21st where filming is scheduled to take place from 5:30 p.m. to 8:30 p.m. on 6th street in between Grapefruit Blvd. and Vine Street.

The parade scene is in collaboration with Mayor Steven Hernandez of the city of Coachella as well as Raices Cultura, a non-profit that hosts the annual Run with Los Muertos 5k, bringing together thousands to celebrate the cultural tradition.

“I spent most of my 20s in the Coachella valley and now it is my family and it’s my home away from home. We try and spend as many weekends and holidays out here and so filming here is like being on vacation, but we’re working,” added Hatton.