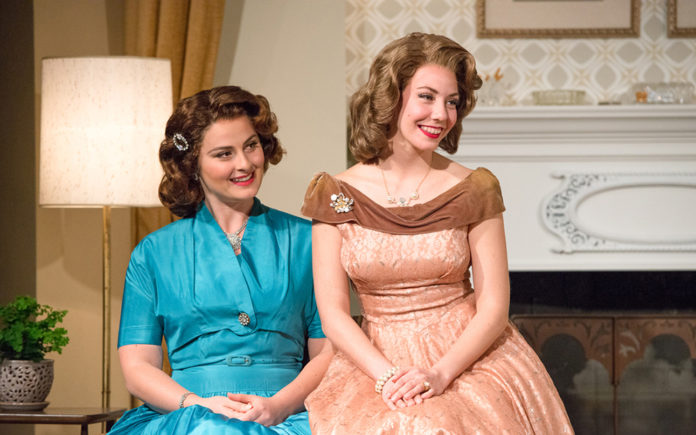 “I cannot and will not cut my conscience to fit this year’s fashions.”

….. Lillian Hellman, Playwright.  Her response when called before the ‘House Committee on Un-American Activities’ during the McCarthy era. 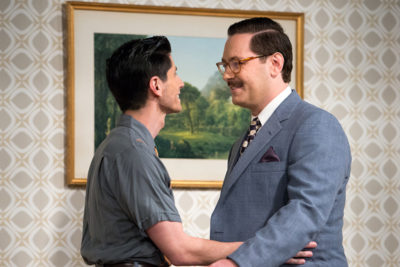 Senator Joseph McCarthy, (R-Wisconsin) will forever be known as the instigator of one of the darkest periods in American History.  Between the late 1940’s and mid 1950’s, the United States experienced what was called, ‘The Red Scare.’  It began as oppression and fear mongering against anyone suspected of being a communist, (with or without proof,) and eclipsed into the persecution of anyone thought to be a degenerate; Drunkards, loose women, and those with general moral turpitude. This of course included gays. Though primarily referencing gay men, since misogynistic men could hardly fathom women having sex without them.

It is against this backdrop that Topher Payne’s dramedy, “Perfect Arrangement,” is set.  Currently in production with Dezart Performs at the Pearl McManus Theatre, Perfect Arrangement, tells the story of two couples, Norma Baxter, (Olivia Saccomanno) and her husband, Jim Baxter, (Hanz Enyeart,) Millie Martindale, (Phylicia Mason,) and her husband Bob Martindale, (Adam Jonas Segaller.)  In a time of crushing homophobia, these four have worked out a perfect arrangement.  In truth Norma and Mille are lovers and Bob and Jim are, as well.  Each couple shares one half of a duplex, appropriately separated by a closet with a secret passageway that allows them to go back and forth between the two homes when heterosexual appearances need to be made. 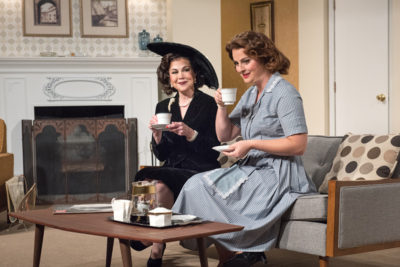 Bob works for the government and it’s his job to investigate all of the suspected subversives and ensure that they are fired and never hold another respectable job. Norma is his secretary who painfully comes to realize the hypocrisy between their private lives and their work.

Dezart hit it out of the ballpark with this play.  Payne’s script, the ensemble of actors and the production value of this show are absolutely phenomenal.   Olivia Saccomanno, as Norma, is a talent that I sincerely hope we see a lot more of in the desert. Her performance makes even an oppressive black and white era such as the 1950’s, seem like it’s in living color.  Yo Younger, as the loose woman, Barbara Grant, owns the stage when she walks through the door.  It’s not just Michael Mullen’s breathtaking costumes that draw your attention, Younger is stunning as a woman who defines confidence and takes no prisoners. Adam Jones Segaller as Bob Martindale, gives an outstanding performance as a truly sympathetic man imprisoned by the times and his own self-doubts. 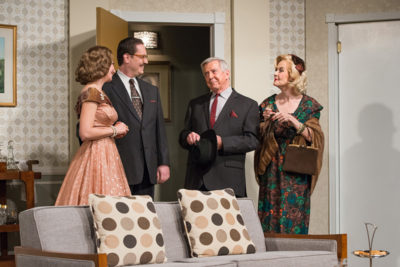 Deborah Harmon, as Kitty Sunderson, (the easily distracted wife of Bob’s boss, Theodore Sunderson, Hal O’Connell,) was the personification of class and elegance. Harmon’s performance was a throwback to Bette Davis in her prime.

Michael Shaw’s skilled direction kept the staging balanced and moving at a pace that fit perfectly with the comedy and/or drama of the scenes.  I was engaged and captivated every moment that there was movement on the stage. 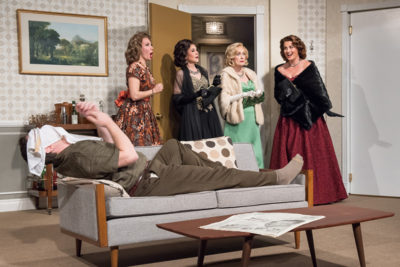 There was not a single production element that was lacking in this show.  Clark Dugger’s sound design, Thomas Valach’s set design, Mathew Garrett’s lighting, James Geier’s wigs and as previously mentioned, Michael Mullen’s gorgeous costumes, all came together like a fine symphony to produce a stellar production.

Perfect Arrangement, is highly recommended.  They are no doubt close to being sold out for this run, so get your tickets now.  This is a show you don’t want to miss. Perfect Arrangement can be seen through January 20th, at Dezart Performs, located at the Palm Springs Women’s Club, 314 S Cahuilla Rd, Palm Springs, CA