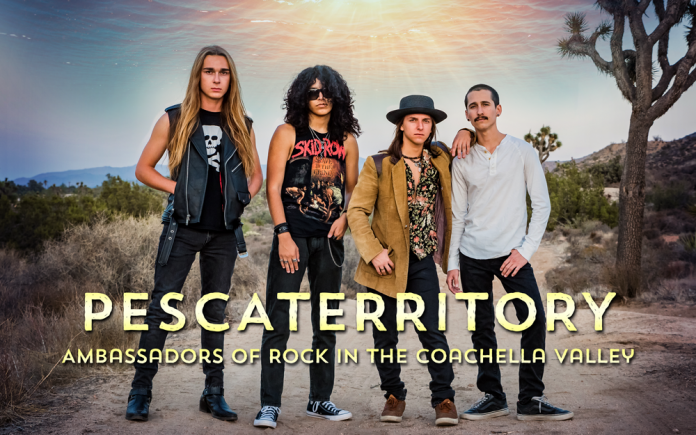 Creating a clean yet authentic sound to distinguish oneself from the crowd of aspiring musicians is sometimes challenging, but one Coachella Valley-based band has come into their own and paved their way towards international success—with all members being between the ages of 16 through 18. Although very young in age, Pescaterritory has earned an impressive reputation with their classic rock tracks reminiscent of late great legends from the 70s. 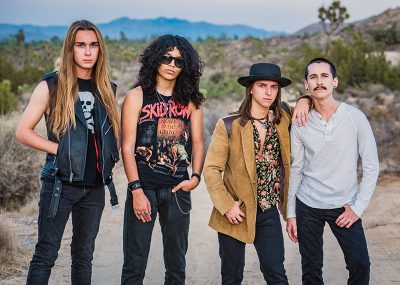 “Music has stuck with me since I was in first grade when I was playing violin and piano. It’s just a solid fact that has remained. It’s still something I can count on,” said Schaeffer.

“Music encompasses everything that goes on in your head. You fall back on that as a support system. It’s always there for you,” added Jason Zembo.

Since their first gig at the Riverside County Date Festival in early 2019, the band has played iconic venues such as the Whisky a Go Go and Pappy + Harriet’s. Other venues include two nights at the Indian Wells Garden Jam, the Indio Tamale Festival, as well as an acoustic performance of original songs in Nashville, Tennessee, in June at the Commodore Grille. 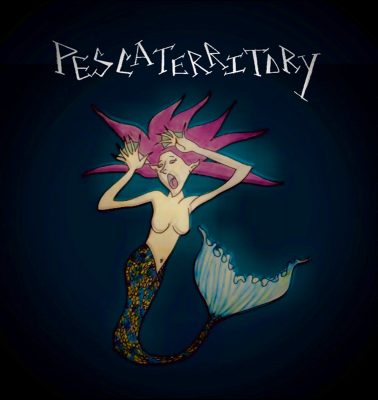 Pescaterritory received global attention when two of their songs “Better Off Dead” and “King Street” debuted on the Barry Tomes US10 radio show in Birmingham England in July 2019. With the release of their self-titled album Pescaterritory in October 2020, the band has received radio play in the USA as well as the United Kingdom, Spain, Scotland, and Australia.

“For a band who have only been together a few years, two of which left us all in lockdown, they made good use of their time. As musicians, they started with the bar high. They are mature musicians wise beyond their years. A real band’s band. Not just a group of players. The release of their self-titled album was, in my opinion, one of the best debut albums I had ever heard,” stated Pescaterritory’s publicist Barry Tomes.

Tomes first came across the band when one of his other representative artists performed a gig at Pappy + Harriet’s in Pioneertown. After the performance, a young band appeared on stage and Tomes immediately knew he was in the presence of greatness. Even having been in the business for 50 years, Pescaterritory still blew Barry away. He then offered to work with the band preparing them for global success as their publicist. Pescaterritory features regularly on Barry’s US10 radio show and other radio stations in the United Kingdom.

“I grew up around international rock stars. I have toured the world, even with bands such as The Beach Boys. I know what is on offer out there and I am 100 percent certain Pescaterritory is going to join that list and be comfortable there,” praised Tomes. 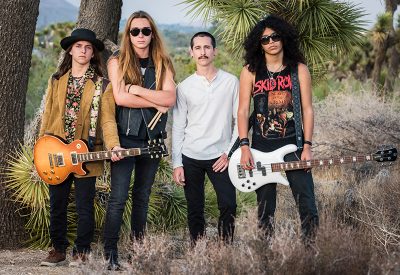 In 2020, the band was invited to perform in the United Kingdom at Rock The Beacon in Birmingham (England) with several other shows booked over the month they were due overseas, however, COVID got in the way of those plans. Pescaterritory appeared on the show, Late Night With Monica Price, after which drummer Nick Willman was asked to appear on Drumathon Live. The event involved 250 hours of live drumming, with Willman closing the Drumathon. Drumathon Live is a global charity event raising thousands of dollars for mental health charities, featuring drummers from around the world and bands like Coldplay, Simple Minds, and Stevie Wonder.

“It was a great experience participating in Drumathon this year, not only because of the great drummers I got to participate with, but the honor to help in raising money for mental health awareness,” said Nick.

Pescaterritory has several upcoming performances. The first of which is at Palm Canyon Roadhouse on August 28, from 9 p.m. to 1 a.m. On September 5, the band will play at the Las Vegas RockStar Bar and School of Rock Green Valley End of the Season Show Summer 2021 at 3 p.m. They are also scheduled for a podcast appearance on the Jimbo and Jackie Show on September 8 at 8 p.m. There will also be a September 10 performance at Rockefellas in Corona at 10 p.m. to 12:30 a.m. 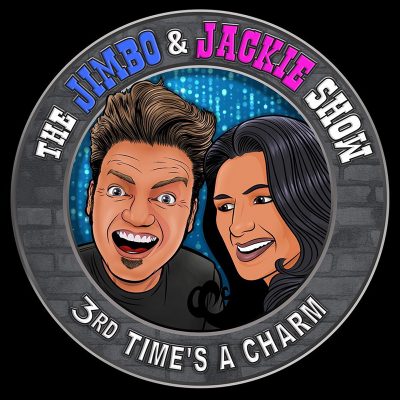 The invitation for the band to perform in Las Vegas at a School of Rock event shows already that Pescaterritory is being recognized as a future international success for the USA.

“We’re so excited to have Pescaterritory play for us. It’s nice for the kids who are on the same path as Pescaterritory see them get after it and achieve things. Makes it seem not so far out of reach,” said the general manager at the School of Rock Green Valley Chondell Le Land.

The band is currently writing new music for a follow-up release, guaranteed to show artistic prowess for musicians who are experienced beyond their years and destined for greatness.

You can stream Pescaterritory’s music on Spotify, Apple Music, and Youtube Music. Follow the band on social media as well @pescaterritory.