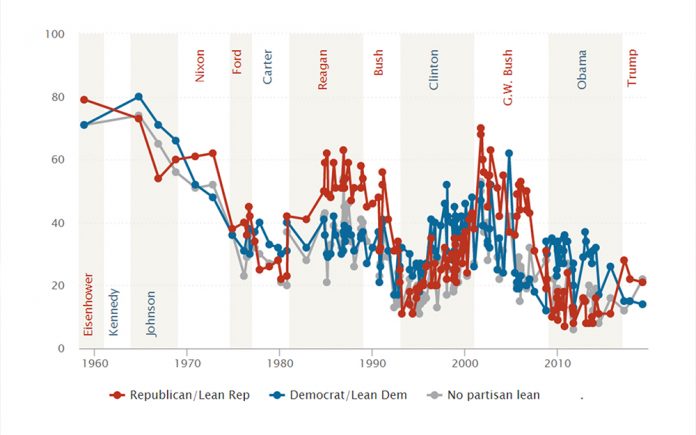 As people make decisions on a variety of elected offices, might I suggest that we look beyond their party colors and consider which candidates might make the best leader.  Poll after poll shows that a vast majority of American distrust their elected leadership.  According to the Pew Research Center, only 17% of Americans trust DC most of the time.  Only 21% of Republicans currently trust government while 14% of Democrats do.

If you look at the chart, you will notice that trust has steadily declined over time.  While there was an uptick during the Clinton Administration as well as early in the George W. Bush Administration, the downward trend continued under Obama and grew worse with the Trump Administration.

An effective leader can compromise in order to advance the needs of the country.  If we look at the sad state of affairs in DC, it is clear that those in current leadership for both major parties are failing on this front.  During a period in our country’s history where we should be united in getting through the pandemic, we are instead divided into seemingly tribal nations with the inability to work with those of differing views.

President Eisenhower once said that “The supreme quality of leadership is unquestionably integrity. Without it, no real success is possible, no matter whether it is on a section gang, a football field, in an army, or in an office.”

An effective leader diffuses problems before they become larger issues.  If we use President Trump as an example, when a New York Times article splashed headlines that he paid only $750 in personal taxes, the President and his people were defensive thus lengthening the news story as well as its negative impact on his reelection campaign.  What would have happened if the discussion shifted to one that showed how these tax loopholes help to create many of our greatest buildings around this country?

While Trump might be utilizing the loopholes more than the tax code originally imagined, he was building things for society that would not exist without those incentives.  By recasting the debate in this manner, he would have diffused the situation while coming across as a leader.  By obfuscating and acting defensively, Trump made it seem as those his detractors were correct in that Trump did something wrong.

We can often judge the character of a person by the company they keep.  Prince Andrew’s long-time friendship with Jeffrey Epstein is probably why most distrust Andrews’ constant protestations of innocence.  The same can be said for former President Clinton given his numerous escapades over the years. 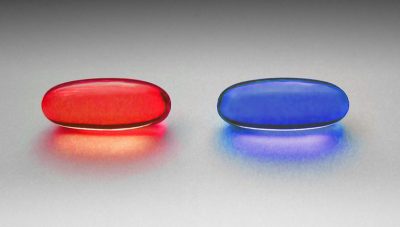 Along those lines, you can usually tell a lot about someone by who their long-term friends and colleagues. If we use President Trump again as the example, he appears to have a number of critics who were his most relied upon advisors.  His immediate family seems loyal as are his inner contingent of Mar-a-Lago friends, yet he appears to have more than his share of disgruntled associates.

While most of us have decided on who we are going to vote for in the presidential race, you may still be thinking about others running for your local city council or another elected office.

While doing this, think about who will work their hardest to create the place that you want to live in.  In a small community like ours, you may find that the party color of the candidate means less than the reason why that person is running.  Is the person who you plan on voting on working for you or those funding their campaign?

You can find out easily by visiting the websites for The Federal Election Commission and the California Fair Political Practices Commission.