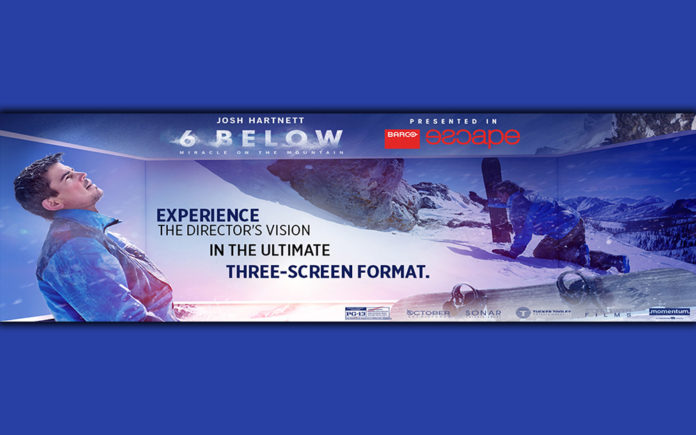 The opening of the film marks the first time ever that a feature length film is being presented start to finish in Barco Escape’s three-screen, panoramic movie watching experience.

Barco Escape is an ultra-wide theatrical movie format that utilizes three cinema projectors and two additional cinema scope screens to create the ultimate panoramic viewing experience. With only 20 North American locations capable of showing the film in the Escape, residents of the Coachella Valley have a rare opportunity to see the film in the way the director envisioned it.

Six Below is a story of survival and transformation.  When a snowstorm strands former professional hockey player Eric LeMarque (Josh Harnett) at the Sierra Nevada Mountains for eight days, he is forced to face his past and come to terms with his personal demons and rediscover the power of faith within him in order to survive. The screenplay was adapted from the book “Crystal Clear” by Eric Lemarque and Davin Seay.

On Saturday October 14th at 7pm, Mary Pickford is D’Place is hosting a special public Q&A screening of 6 Below: Miracle on the Mountain with the film’s director Scott Waugh (Need for Speed, Act of Valor) who will be joined by the films editor Vashi Nedomansky to discuss how they pushed the creative boundaries of film by bringing this breathtaking survival story to life in Barco Escape.

Barco Escape was installed last year as part of the Mary Pickford’s renovations that have modernize the facility with new improvements, such as new Plush Recliners, D-Box Motion Chairs and new restrooms. The Mary Pickford is located in downtown Cathedral City across from city hall, at 36-850 Pickfair St Cathedral City, CA 92234.  Movie line (760) 327 7100. Tickets can be purchased online at DPlaceEntertainment.com.

6 Below Miracle on the Mountain will play in Barco Escape every day starting Friday Oct 13th including discount Tuesday and on Golden Wednesday when Guests 60 and better can see the film for only $6.50.