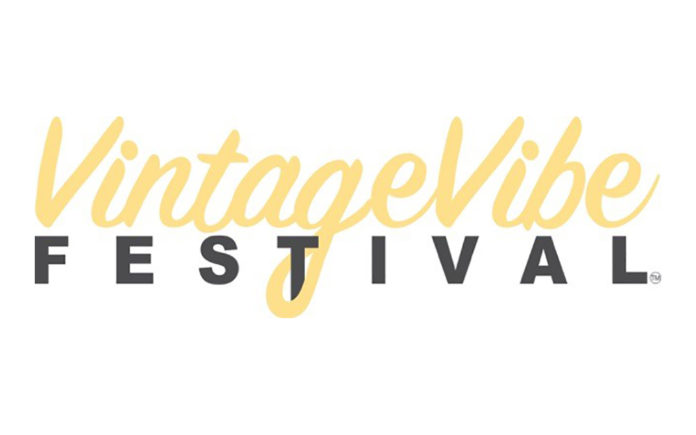 VintageVibe Festival, a celebration of American culture from the mid-century modernist period through the 1990s, is coming to Palm Springs for three days, October 20 – 22. That era’s bold innovations in fashion, music and art are at the core of VintageVibe, which offers an indoor marketplace teeming with memorabilia, art, goods and fashion reflective of that special time with a mind-blowing music festival that is unique in its approach to booking contemporary artists who conjure that epic time.

Live musical performances are the cornerstone attraction of VintageVibe with inspired headliners providing a living soundtrack, in a very real way that serves to underscore the key role music played in binding modernist culture. Festival performances are set for the Palm Springs Convention Center’s Primrose Ballroom over the course of three days with sets nightly from nationally celebrated artists including Black Joe Lewis and the Honeybears, Best Coast, Shannon and the Clams, Nick Waterhouse, The Cactus Blossoms and others.  Additionally, a kick-off pool party held Thursday evening, October 19 at The Saguaro Hotel includes performances by the musical act Flux Capacitors.

The festival features not only the musical performances and indoor marketplace but also boasts a multitude of retro-centric activities including photo shoots for those who desire to channel their inner Bettie Page. Secret shoppers/judges will award prizes to the best era dressed individuals they see at the Festival irrespective of referenced decade. The Festival will also feature a fun, interactive game area – prizes will be awarded and, to round things out, there will also be mid-century décor exhibits.

Above all, nothing speaks 20th century like its music as underscored by the music presented at VintageVibe where that throwback sound (or #vintagevibe) will electrify the stage in the Primrose Ballroom of the Palm Springs Convention Center each evening. In addition, there will be music acts all day long on the Marketplace Stage.

Best Coast is an LA-based duo that has risen to fame on their unique blend of surf rock, 60’s pop, and 90’s pop-punk. The group was founded by Bethany Cosentino and Bobb Bruno who have cited an eclectic assortment of influences from Patsy Cline and Gwen Stefani to My Bloody Valentine and The Go-Go’s. Their most recent album, released through Capitol Records’ Harvest imprint was the very appropriately titled California Nights.

Nick Waterhouse, a Southern California native, is another of VintageVibe’s star attractions. He has been touring worldwide behind his jazz, soul and rhythm and blues stylings, with influences ranging from Bert Berns and Mose Allison to John Lee Hooker and Van Morrison. His current album, released by Innovative Leisure, is Never Twice.

Black Joe Lewis and The Honeybears, disciples of Howlin’ Wolf and James Brown, bring the funk, blues and soul from their Austin TX base to VintageVibe. The group is no stranger to the festival circuit and has graced the stages of Austin City Limits, South By Southwest, and Bonnaroo. Just this year, Backlash, their current album release, reached #3 on Billboard’s Blues Chart.

Rounding out the main stage headliners are The Cactus Blossoms. Coming off a recent featured performance in the Netflix original series Twin Peaks, band mates (and brothers) Jack Torrey and Page Burkum, began their journey by performing both well-known and obscure pre-1960’s country music.  They have taken the style and run with it in creating their unique, decade-transcending sound, reminiscent of the Everly Brothers.

Other featured artists appearing on the main stage include Shannon and the Clams, a highly regarded garage punk quartet who incorporate doo-wop, ‘60s girl group, psych and surf elements into their sound. The critically lauded Explorers Club, a group that launched out of Charleston, SC, will offer their unique take on the Beach Boys/Spector sound with brilliant original songs and innovative musical arrangements. Also slated to appear are The Generationals, a New Orleans duo whose first album release was cited by the New York Times as “delectable,” calling their approach one that “shimmers with the music of the British Invasion, Stax soul, Wall of Sound production, ‘50s doo-wop and California dreaming jangle filters through a contemporary indie-rock lens.” Tracy Bryant, a Los Angeles-based post-punk performer who calls to mind the new wave rockers of the ‘80s, albeit with a contemporary sensibility, is another VintageVibe performer.

Beyond these artists, VintageVibe will host two rock ‘n’ roll tribute groups:  Not Fade Away: The Ultimate Buddy Holly Experience and Sail On, who pay homage to the Beach Boys.

The Marketplace Stage will feature acts performing in a myriad of styles from blues to swing and acid rock to bluegrass.  These include Coyote Slim, Ricky Montijo and the Mojitos, The Jungle Cats, Jason Paul, J. Peter Boles, Grampas Grass, Lizzy and the Triggermen, Hunter and the Wick’d, and Phat Cat Swinger. A dance contest will also be integral to performances from Phat Cat Swinger, and Lizzy and the Triggermen, with various prizes awarded to participating contestants.

Not only will the Festival be filled with enough decade-spanning sights, sounds, and activities to keep any vintage aficionado busy all day long but also attendees can continue feeling the VintageVibe all night at the host hotel, The Saguaro Palm Springs. The Saguaro is a Palm Springs paragon known for its colorful, modern appearance, decor, and splashy, Instagram-worthy pool parties (@thesaguarops).  The Festival kicks off at The Saguaro on October 19th with a Back to the Future themed pool party featuring the Flux Capacitors, the “official Back to the Future ‘80s tribute and fandom theme band.” Tickets to the pool party are included with a Thursday evening stay at The Saguaro. VintageVibe VIP Pass holders are also invited to the pool party or tickets may be purchased separately at the event.

A portion of every VintageVibe Sunday concert ticket sold, including the Sunday portion of 3-day general and VIP passes, will go directly to SANCTUARY Palm Springs, supporting the needs of LGBTQ teens as they transition out of foster care. There will be other opportunities to donate to this very worthwhile organization at the festival. SPS is unique in its approach to Independent Living Skills training, providing their residents with a Matched-Mentor program designed to integrate them into the LGBTQ community. Founders David Rothmiller and L.D. Thompson believe that everyone deserves the opportunity to succeed, stating, “We want to provide a healthy environment for LGBTQ youth to find their voice, find their art, find their strength and find their peace.” For more information visit www.sanctuarypalmsprings.org

Jared Mancuso of Emerging Pursuits, LLC describes the festival as “a celebration of all things vintage, which we consider anything prior to 1999.” When asked what makes this festival unique, “did we mention air conditioning,” he laughs.  “But really, Vintage Vibe is major music and more. We are trying to give people a complete experience, and celebrate the drastic style evolution that took place in 20th century America by showcasing those who pay tribute to or feature inspiration in their designs, products, and music. Palm Springs is the perfect place to do just that. It’s this modernistic oasis that boasts a rich history as a getaway destination to the stars of old Hollywood and features prominent mid-century modern architecture and design set against the stunning backdrop that are the mountain ranges bordering the Coachella Valley. It has managed to both evolve with the times and retain its mid-century charm, to simultaneously be new and old.  Essentially, it IS VintageVibe.”

VintageVibe Festival is inimitable in that it takes what’s old and makes it new again; whether you laughed late at night when Don Rickles guested on Johnny Carson, cried when your mood ring turned blue, couldn’t help falling in love with Elvis or practiced choreography as seen in Prince videos in your kitchen until it was perfect. VintageVibe Festival provides a venue for nostalgia with fresh twists that pay homage to our fondest memories of 20th century America.

Information about 3-day passes, VIP passes, single day passes and general admission is available at www.VintageVibeFest.com. Inquiries regarding the musical lineup and about how to become a vendor and/or sponsor is also available by contacting info@vintagevibefest.com.