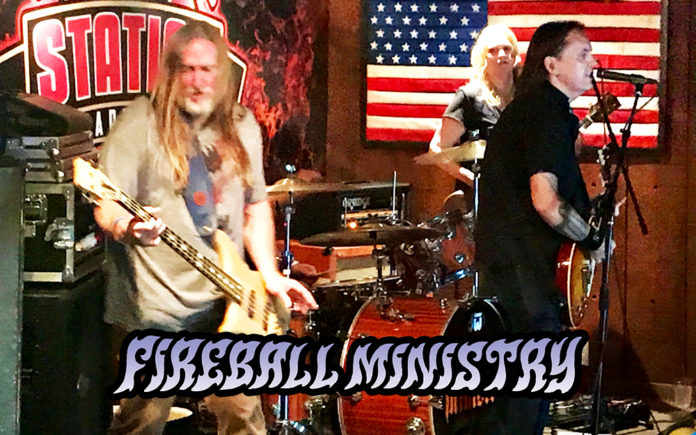 I first witnessed the ‘First Church of Rock n Roll,’ aka Fireball Ministry, in 2004 at the House of Blues in Anaheim, opening a show for Anthrax and DIO. The Reverend Jim preached to me the word of rock and that grungy, gloomy fuzz sound has stuck with me since. Fireball Ministry will be performing at Cal Jam 17 on Saturday, October 7th at Glen Helen Regional Park in San Bernardino, CA with the Foo Fighters, Queens of the Stone Age, Cage the Elephant, Liam Gallagher, The Kills, Royal Blood, Bob Mould, Babes in Toyland, The Obsessed and more. I recently attended a very casual 30th wedding anniversary celebration for Fireball Ministry bassist Scott Reeder and his awe-inspiring wife Renee at The Station Tap House Bar and Grill in Banning, California. There may or may not have been a Fireball Ministry performance, I cannot confirm or deny. Either way it was awesome! I got my hands on the new album, Remember the Story, the band’s first album in almost seven years, and it is ambitious. It covers an extensive space and feels more temperamental than the usual Rota themes. According to the band, the album’s theme is about death and renewal; a second chance at life if you will.

Fireball Ministry is James A. Rota II on vocals and guitar, Emily J. Burton on guitar and backing vocals, Reeder on bass and John Oreshnick on drums. Below is my track by track album review.

From the get-go you hear it coming. The song has a slower tempo and a great intro to Scott as bassist. It has a wonderful groove. At the 3:50 mark it picks up tempo and shows their diversity as a band. I can feel the fuzz.

Another slower tempo tune. The bending of notes is spectacular with more groove.

Cowbell! More cowbell! Guitars! Bass! It’s all here. They released a lyric video for this song. Cool graphics of space and spaceships. Love the bass line in this song.

This is my favorite song on the album. It is the first video single. It features a bass breakdown by Scott. The video was directed by Brandon Trost. Trost most recently worked with Rota on the latest two Foo Fighters videos as Director of Photography and he has a visionary way of telling stories set to music.

This a straight-ahead, no-nonsense, drum heavy, mid-tempo groove of a song.

Stop talking is right. No lyrics needed here. Black Sabbath-influenced and Kyuss-esque in my opinion. More fuzz please. I sense Reeder’s heavy thrust and impression on this song. Mid-way it picks up to a marching pace that is spot-on.

The title track is slow and rocking.

More doom and groove. “And if I close my eyes-Can’t leave it all behind-Shut the door”

This song is a Motörhead cover recorded as a ballad and pays great homage to Lemmy Kilmister. What a great way to end the album thematically and orbit its theme once more. Make sure to watch the trippy lyric video they produced. 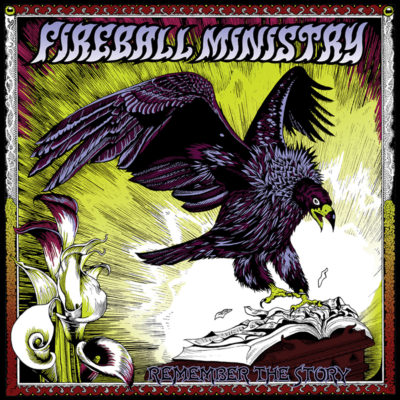 From the beginning, Fireball Ministry has aggressively steered clear of pretention, desperation for validation, and all manner of poseurdom, throwing down analog-soaked, bottom-heavy tunes, and tipping a hat toward timeless hard rock, without ever descending into the depths of mere retread or throwaway novelty swill.

Remember the Story delivers the band’s tried and true signature stomp and fuzzy swing. The album mines the depths of loss, pain, and confusion, exorcising demons with the spirited uplift this kind of music best delivers.

Fireball Ministry’s first album with Cleopatra Records pairs them with producer/mixer Paul Fig, the engineer behind important records from Alice In Chains and Ghost.

Sabbath soaked rhythms, Priest worshipping melodies, and no-nonsense Thin Lizzy mayhem collide in the Hollywood, California band, a group that has humbly but confidently owned its rock authenticity since the hard-partying year of 1999.

The WWE and the people who made Sons of Anarchy are among the true believers who’ve adopted Fireball Ministry anthems as battle cries in their programming. Songs like “The Broken,” “Sundown,” “Turn to Stone,” “King, “Flatline” and “Kick Back” are certified modern classics for any self-respecting acolyte of loud amplifiers.

Fireball Ministry has truth and rock n’ roll valor imprinted in their DNA, with a mixture of East Coast and Midwestern roots stirred into their California melting pot.

James A. Rota II is a one-man creative arsenal, with production credits in music, lm, and TV, including the Emmy nominated HBO series Sonic Highways. He’s part of The Company Band alongside members of Clutch, CKY, and Fu Manchu. Rota’s fellow cofounder/guitarist Emily J. Burton is also a highly skilled creative talent, moonlighting with her Dutch Hollow General jewelry company. Scott Reeder has several producer credits to his name and is best known as the former bassist of stoner/doom legends Kyuss and The Obsessed. John Oreshnick’s Angel City Drum Works is an integral part of Southern California’s music scene, with his facilities doubling as Fireball Ministry’s base of operations.

For nearly two decades, a subversive clandestine cadre of true believers from all walks of life has spread the good word about the band. Fireball Ministry asked an important question with their debut in 1999: Ou Est La Rock? In 2001 they released an EP on Small Stone, FMEP, enlisting the bass rumblings of Brad Davis (Fu Manchu). Four years later, the rumble rang louder from the underground, with MTV News taking notice of The Second Great Awakening (Nuclear Blast).

Fireball Ministry remains determined to achieve success on their own terms, forging ahead with lives free from artistic compromise. Never forget to Remember the Story.

Oct 5 – Hollywood, CA – Amoeba Records 6 p.m. celebrating the album’s release with an in-store performance & signing copies of their album on vinyl and CD