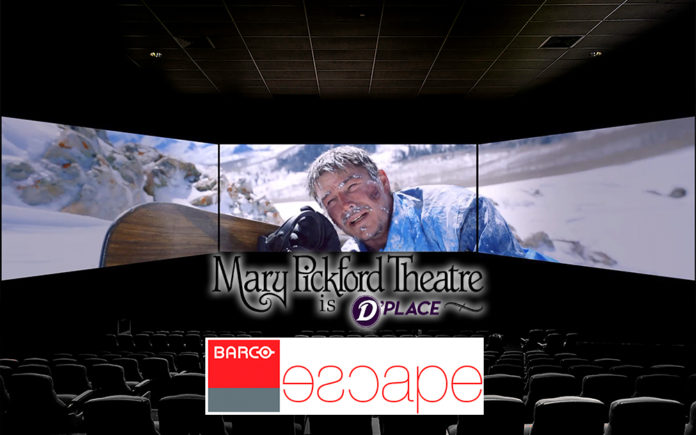 Mary Pickford Theatre is D’Place is constantly offering unique events to the valley and another one is coming up. The premier of 6 Below: Miracle on the Mountain, the first movie ever to be filmed entirely in the Barco Escape format, is on Friday, October 13, with a Q&A session with Director Scott Waugh (Need for Speed, Act of Valor) and Editor Vashi Nedomansky on Saturday, October 14 after the 7 p.m. showing.

Barco Escape is a three screen experience that gives you extra visuals and makes the movie more immersive. “The premier’s actually pretty cool,” says owner Damon Rubio. “The movie 6 Below is the first feature film to be shot entirely in the Barco Escape format. Because of that, and because we’re one of only 20 locations in North America with a Barco Escape, we were able to connect with the director, who is really a giant fan of this format, and get him and his film to come out on Saturday the 14th to basically introduce the film and then to do a Q&A after the film plays then talk about the whole experience of shooting the film in Escape.”

Q&A sessions usually go on for about 45 minutes, beginning with questions from a moderator and then giving the audience an opportunity to ask questions. The theater often offers Q&A events along with the movies they show and they are usually well attended. “It’s always based on who’s showing up. When we did the composer for La La Land that was a packed house because everyone wanted to see him. We actually had a piano set up and it was like a week before he won the Oscar for best composer, so that was a big deal. And we’ve had some other ones where it wasn’t as well attended because, you know, maybe the stars didn’t draw people… it’s really based on the people. I hope that because of this guy’s history and the fact that he’s a real director that people in town might take advantage of it. Especially folks who are interested in the filmmaking process like students or folks that are in college that are learning filmmaking. This would be a great opportunity to come and basically be able to hear what it’s like to make a movie, how to get a movie made, and also ask questions of a real professional,” Rubio says. Other sessions that were hosted recently included the stunt coordinator and the first unit director for The Fate of the Furious, Lily Collins, and some actors from Phoenix Forgotten.

Relatively few movies are filmed in Escape format and Rubio believes that 6 Below is a great example of how it can revolutionize filmmaking. “The director really loves the escape format, and again, the escape format is this three screen format that, to a director who has a good story, that’s really wanting to expand their visual tools, this offers them that capability. So you can do a lot more image on the screen than you can with a typical movie and it’s really cool to see them take this on,” Rubio says. “This film is a survival story about a guy that gets lost out in the woods and if you think about when you want to show a vast wilderness landscape, putting it in Escape, where it just kind of goes on forever and ever… you’ll be drawn into that experience. The character is supposed to feel small and isolated and lost and maybe you can convey that in a regular picture but when the guy is 30 feet tall and he’s only got ten feet on each side of him, he doesn’t really seem that small. But when you suddenly have 30 feet of image on each side of the guy, it makes that character look smaller on screen which can really convey a powerful message and I think that’s what the director liked, is the ability to use this format to really create a different experience than you would get if you watched it on a smaller screen.”

Other movies shown at Mary Pickford is D’Place, such as Star Trek Beyond and The Recall, have included about half an hour of use of the Escape screens, and Rubio hopes to see the format utilized more. “There are some other really important directors in Hollywood that are looking at doing their next film in this format so it’s going to be something that you see more and more of here in the future,” he says. “If you have a director who shoots the entire film in that concept, they really make the most of it, rather than just adding a few minutes of special effects on the side.”

According to Rubio, the Barco Escape screens have been well-received by the public as well, saying, “When we’ve had films like Star Trek, we played it in a regular format and we played it in the Escape format, the Escape format did much better.” Attendees are also enjoying the D-Box seats, which have movement synchronized with the films. “We’ve been very happy with the results of both the Barco Escape and the D-Box, and not just that but the recliners… we’re seeing an uptick in attendance,” Rubio says.

Tickets are available at dplaceentertainment.com.