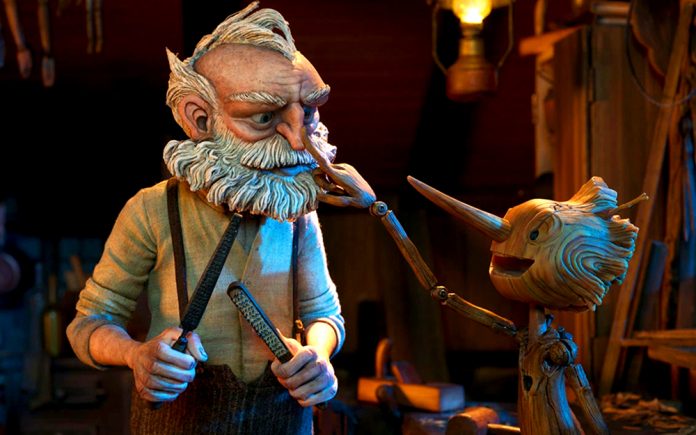 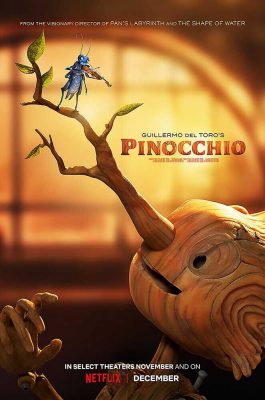 Once upon a time there was a piece of wood …

And that piece of wood became Pinocchio and the story became the first internationally known work of Italian children’s literature.  The Adventures of Pinocchio is the most translated Italian book in the world.  It has been adapted for film 18 times, including two live-action movies starring Roberto Benigni.  Disney and Netflix have both released new versions.

For most of us, Pinocchio is synonymous with Disney’s beautiful hand-drawn 1940 animated movie about a wooden puppet whose pointy nose grows every time he tells a lie.  But the original Italian story is not primarily about lying.  Yes, he lies but he’s also  selfish and unreliable and makes a ton of bad choices.  The moment Geppetto fashions him out of a miraculous block of wood Pinocchio runs away and refuses to come home.  His antics lead to Geppetto’s arrest.

It’s more than  a little self-aggrandizing that Guillermo del Toro gets a possessory credit for a movie that he actually co-wrote and co-directed.

This classic and beloved story as originally written is about the dangers of innocence.   Del Toro’s take is about death, grief and fascism.  You read that correctly.  Marketed as a family film, it is not for kids.  It’s trying to say too much and becomes tedious and confused.   It’s visually murky and dark.  The stop motion is nothing exceptional.  But the voice cast is amazing but cannot make up for the thematic missteps. 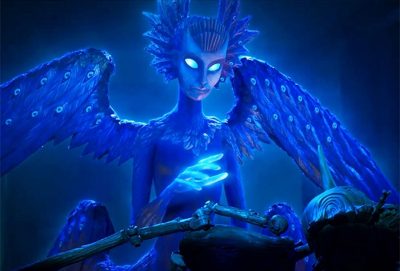 Oh, and on top of that it’s a musical (really).  I promise you will not leave the theater humming or skipping to any of the bland songs.  And it felt like the movie would never end.  It’s unnecessarily long.

There was no one else in the cold theater auditorium we attended on opening day..  That should have been a clue.  Finally one lone person wandered in and sat in the front row.  He immediately began making guttural sounds, grunts and shouts at the screen.  His attire suggested he was an unhoused individual dealing with mental challenges.

In the original story, the fever that turns Pinocchio into a donkey is his punishment for skipping school and running away to Playland.   Pinocchio had already been warned by a talking cricket (in the del Toro movie version the insect’s name is Sebastian).   The story as originally written was about the value of getting an education.  The cricket originally says something like: “You poor little sucker, don’t you know you’re bound to grow up and be an absolute donkey and everyone will make a fool of you…” 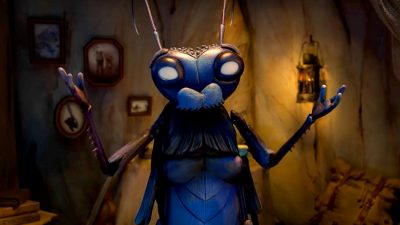 So much more could be written about this disappointing film but what would be the point?  Not recommended.  If you feel differently, I want to hear from you.  Now streaming on Netflix.