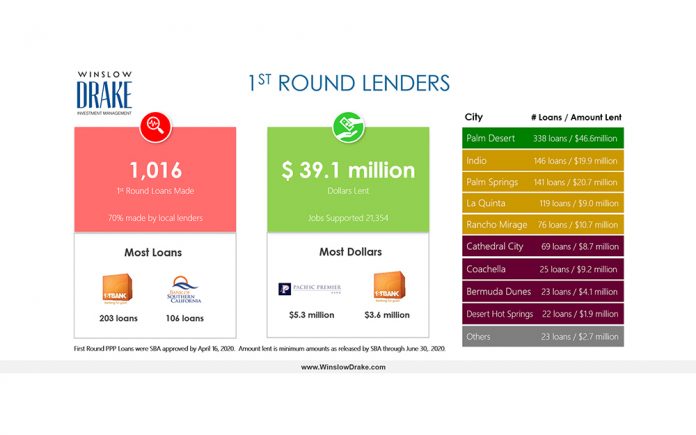 When the U.S. Government approved the Paycheck Protection Program for Small Business, the intent was that these funds would be used to protect businesses without access to the capital markets like America’s largest corporations.  As some of these funds were forgivable loans, businesses of all sizes, shapes and financial needs applied for these loans.

In the beginning, much of the money went to businesses with the best relationships, or presenting the most risk, to their respective banks.

It makes sense that banks were going to look after their most important relationships first as government funding was first come, first served.  Banks also remembered past government emergency programs where the banks were left liable for some loans following the Great Recession.  When those loans went bad and borrowers stopped paying, the government worked at getting as many of those loans government guaranteed loans put back to the banks so that the banks would take the loss instead of the government.  If we look at this from a bank’s standpoint, once bitten, twice shy.

According to US Treasury and Small Business Administration statistics from the end of June, 1,016 loans were made to Coachella Valley businesses during the 1st round of PPP for $39 million.  70% of these loans were made by banks with a local branch presence.  One-third of all loans were made by only two loans banks: FirstBank with 203 loans and Bank of Southern California with 106 loans.  Stated differently, FirstBank made one out of five loans while Bank of Southern California made one in ten loans.  Combined, they made one in three loans locally.  For this level of support, these two banks should be considered the Coachella Valley’s Most Reliable.

If we include Pacific Premier and Mechanic’s Bank (formerly Rabobank) which made 80 and 79 loans, respectively, these Local 4 represented 66% of 1st round PPP loans.  If we add banks with no local presence, nine in ten loans made during the first round were made by an out of town bank or one of the Local 4.

For comparison, the Valley’s two largest banks to small business – Wells Fargo and Bank of America – made a total of five loans to locals.  Where Wells and BofA represent x% of local deposits, they made only 0.5% of 1st round PPP loans.  If we add Chase and Citibank to comprise the National 4, this mighty group made a total of 29 loans or nearly 3% of the 1,016 loans made to Coachella Valley businesses.

Once the 2nd round of relief got here, government loan programs were better understood by the banks and the ability of local businesses to get relief came more easily.

Through June 30th, more than 5,400 loans have been made injecting $390 million to the local economy.

Bank of America which made only four loans locally during the 1st round had made more than 800 loans.  This equates to 15% of all loans.

Wells Fargo which was rightly criticized for making only one loan locally during the first round is doing a better job now with nearly loans 600, or 10.5% of PPP loans originated.

Pacific Premier Bank has lent the most at $39 million with Bank of America second at $24 million.  As the purpose of these loans was to protect jobs, California Bank & Trust did that better than anyone.  California Bank & Trust clients were lent 6% of all funds yet protected 20% of all jobs.  At the other end of the spectrum, BBVA loans protected 1.5% of all jobs yet cost 3% of all funds.

As this experience in getting PPP loans has shown, businesses and individuals alike need to consider whether they want a national bank for convenience or a local bank for reliability in hard times.

A local economy does better when locals do business with locals who keep and spend their profits locally.  As the Coachella Valley looks to recover from a financial hit of Depression-era magnitude, try keeping your business local whether it is a bank, a restaurant, or some other business (like an investment advisor…hint, hint).  That is one of the best things you can do for our local economy.