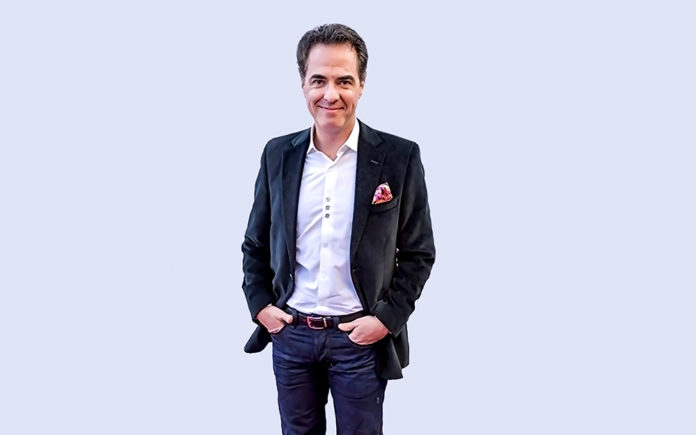 The 30th Annual Palm Spring International Film Festival is producer Johnathan Brownlee’s first.  Although he thinks of himself as a part-time local – he has a home in Joshua Tree and a son attending the College of the Desert – he has never participated in our cinematic celebration.

This year, Brownlee attends with two films he produced and is excited to be part of the fest.

“This is really special,” Brownlee said over coffee in the PSIFF Hospitality Suite at the Hilton Palm Springs.  “I lived and worked in Hollywood for many years and I never had a film in the festival before.  I have a lot of connectivity to the area, so it’s really wonderful to be here.”

Brownlee’s films showing in the fest are “The Standoff at Sparrow Creek” and “Dragged Across Concrete.”

Brownlee has produced four films with the Dallas, Texas company Cinestate.  Dallas Sonnier, Cinestate’s founder, discovered the “blacklisted” script – a Hollywood purchased screenplay that had been shelved — which was originally entitled “Militia” and set in Michigan.

It is writer/director Henry Dunham’s first feature film.  It was shot in Texas, but it’s setting is deliberately ambiguous to be anywhere USA.

“It’s very relevant and contemporary,” said Brownlee.  “There’s not a political statement being made.  It’s really not a dogmatic type of film.  The characters are extremely diverse and well structured.  It really gives you a feel for why these guys are where they are.”

Director Dunham will be present for a Q&A after the PSIFF screenings.  “The Standoff at Sparrow Creek” will be released in theaters January 18.  The film premiered in Toronto last year.

Rolling Stone has named “The Standoff at Sparrow Creek” as one of the ten best movies to see in January.

“’Dragged Across Concrete’ is the anti-‘Lethal Weapon,’” said Brownlee.  “It’s a gritty police drama.  Vince Vaughn and Mel Gibson play partners who are fired after they’re caught on cell phone video beating up a suspect.  It’s rough and not politically correct.”

Other films of writer/director S. Craig Zahler include “Brawl in Cell Block 99” and “Bone Tomahawk.”

Cinestate’s Sonnier met Brownlee in Texas and asked him to help make the movie “Puppet Master: The Littlest Reich” where all the puppetry effects were done in camera.  Brownlee had never made a horror film before but was up for the challenge.

This may be Brownlee’s first PSIFF but he is no stranger to festivals or filmmaking.

Brownlee has written and directed several feature films, and is the CEO and Executive Director of the Dallas International Film Festival (DIFF), which he manages year-round.

Brownlee has been at the helm of the DIFF for only one year.

“What we are trying to do in Dallas is build the production industry, as well as the festival in a way that is similar to how it was done in Toronto,” said Brownlee.  “I really think Dallas has all the right elements to be a really great hub of production regardless of the tax intensives.  It’s a great city and has so much businesses coming in.”

Capital One recently signed on as a sponsor creating The Dallas International Film Festival Powered by Capital One.  The company is also assisting to generate a North Dallas Film Festival.

“I love running the DIFF,” said Brownlee.  “I get to bring in films and support filmmakers and that’s really what it’s all about.  It’s not just about showing their films, I want to help them get distribution deals.”

Brownlee has partnered with Brian Schultz and his theater chain Studio Movie Grill (SMG) where the winner of the DIFF gets distribution in the national chain.

Writer/director Cathy Yan’s film “Dead Pigs” won the DIFF top award, and was distributed by SMG.  Yan is now in pre-production set to direct “Birds of Prey: And the Fantabulous Emancipation of One Harley Quinn.”

Studio Movie Grill released Brownlee’s first directorial feature film (“Three Days in August” – 2016.)  The movie chain showed his film in 15 theaters across the country, which served to further his career and connect Brownlee to Cinestate and the Dallas film fest.

Brownlee tapped not only his creative side, but his business side to get the film made and distributed.  Now his experience, passion and filmmaking acumen has given him a model for developing and nurturing filmmakers.

“We want to build trajectory for filmmakers,” said Brownlee.  “We want to train, build, and give filmmakers a platform while also serving to help them launch their careers and make a living.  It’s wonderful to make films, but if nobody sees them, you can’t keep doing it or make a living.”

Brownlee grew up in Canada where the arts are supported and encouraged.

“I started in the theater which was subsidized by the Canadian government,” said Brownlee.  “They wanted to support and build arts programs and they put up money.  A lot of states have film incentives, which I think is fabulous.  But, one of the things we are not doing exceptionally well is supporting film and television production.”

Since living in Texas, Browlee has recognized that the Lone Star state hates to be second to anybody and he hopes to educate the community and lure more film projects to the region.

Working on low budget movies, Brownlee recognized the value of having a knowledgeable, competent and capable crew.  When a first assistant director was exceedingly good, Brownlee asked about his background.  He was ex-military as were all those working along side him.

That inspired Brownlee to form VIFM, a non-profit 501(c)3, which provides free film and media educational programs to veterans.  He developed the curriculum and brought in professional people to teach the courses.  There are four twelve-week sessions a year which provides classroom instruction and paid internships.

“Veterans have the disciple and understand what it means to work together to get the task done,” said Brownlee.  “Our graduates worked on “Standoff at Sparrow Creek” and on our other films.  It’s been wonderful.”

The PSIFF is an exciting opportunity for filmmakers of all levels.  For Brownlee, it is another way to further his vision, mission and love for film.

“The Standoff at Sparrow Creek” 88 minutes

For more information on the Veterans Institute for Film and Media (VIFM) visit www.vifm.us

For more information and to purchase tickets go to the www.psfilmfest.org or call 800-898-PALM