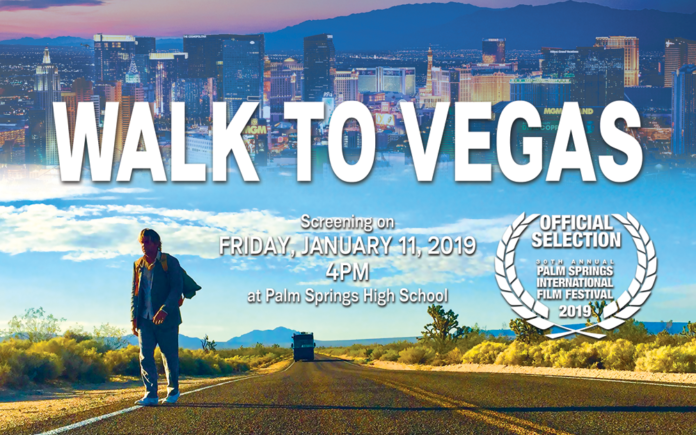 Over thirty years ago, Sonny Bono created the first Sonny Bono Celebrity Tennis Classic as a benefit for the then proposed international film festival in Palm Springs. The event was sponsored by the Palm Springs Film Festival Committee under the auspices of the Palm Springs Chamber of Commerce and attracted several celebrity participants from George Hamilton, Catherine Oxenberg, Richard Roundtree to NFL star Marcus Allen. Two of the other notable celebrity participants at that inaugural and historic event in PSIFF history were Kim Waltrip and Vince Van Patten, who return to Palm Springs to present the World Premiere of their film Walk to Vegas at the 30th Annual Palm Springs International Film Festival.

“It’s really The Hangover meets The Sting,” says co-writer, producer and lead actor of the film, Vince Van Patten in a recent phone interview. The film is based on real events and characters from over twenty years of experiences running one of the most prolific poker games in Hollywood. Van Patten craftily blends the colorful personalities and situations into a fictional world that is as real as anyone will remember. Walk to Vegas is one of the great gambling/con movies that doesn’t delve into the stark, sad, pathetic, degenerate characters often portrayed in films. I wanted to show what I know about gambling which is the joy and the interesting, funny people that gather around a table,” says Van Patten of his gambling caper. 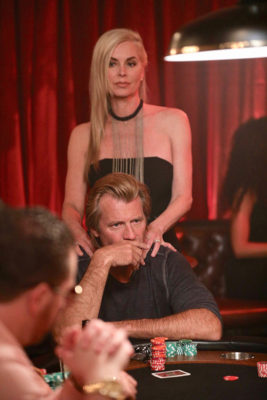 “The film is based on a lot of things that happened over the twenty years I was running a poker game in Beverly Hills with a lot of interesting characters. We would bet on anything! It was a lot of fun. I had notes I kept over the years. There were a lot of stories that I pulled from and probably another thirty stories that I didn’t use. I never thought I would write a movie about any of this, but my wife encouraged me to do it after I was complaining about a couple of other films getting things wrong about (the culture).” Vince Van Patten co-wrote this comedic adventure with Steve Alper. The film follows a cast of characters as each raises the stakes and the hijinks with a poker game turning into a $5 million bet on “Duke” (played by Van Patten) walking from Los Angeles to Las Vegas in a suit. 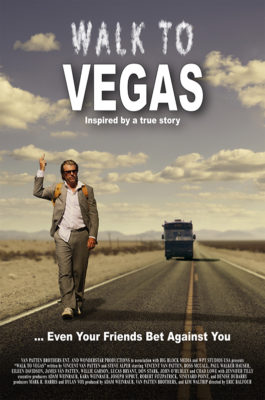 “My dad (Dick Van Patten) taught me how to handicap horses when I was seven. I grew up with my dad running games at our Studio City apartment with guys like (legendary director) John Huston. When I was fifteen, I had a little money from acting and my dad let me play the game with the big boys! I did well and learned the game from some of the best. I had a fake beard made so I could get into the poker games in Gardena when I was 16! I did well, too,” says the World of Poker Tournament commentator. Vince says that poker (and gambling) have taught him to be humble and how to win- to be a good winner while learning that patience is required to beat the game and maybe most important, the game has taught him how to not blow all of his money! “The losses are four times harder than the wins. Not everybody can gamble. It really hurts sometimes and there is risk involved. Not everybody can stomach that risk or the loss. One thing I’ve learned about poker- like life, it isn’t always fair,” he muses.

There is a lot of escapism in gambling just like entertainment. Life can play out at a poker table, sports book, slot machine or a game of bingo. People enter a scene at a given point, whether calculated or random, with a backstory and hope or goal in mind for the future. Vince says you see it all at a table whether it’s the winners- and how they win, or the losers and how they lose. It can be just as infectious to wait how a game plays out as it is to interact with intriguing personalities from parts near and far. Van Patten says one of his favorite characters in the film is “Wing,” an Asian grifter with a loveable charm who always has a glass of white wine in hand and reminds the others with a sort of motto that hints towards a morality code: “Life is short. Have a good time!” The hedonistic reminder serves as a psychological highball of courage for those down on their luck.

With so many stories from real life to draw upon for this screenplay, Van Patten had to leave a lot of memories folded at the table. One story he shared was the story about how he won his teeth in a poker game. “There was a dentist who used to play the game. He was having a tough time and owed me some money but couldn’t pay. He went broke and told me he couldn’t pay the debt but wanted to make it right. So, he did a lot of dental work for me and that’s how I won my teeth in a poker game!” He has many stories and is careful to protect the names of the innocent in favor of entertainment over sensationalism or capitalizing on the personal trials and tribulations of his better-known players. He says what has been the biggest and best lesson of gambling is to bet on himself and that way he has no one to blame for losing but himself.

It was Vince’s brother Jimmy that helped get the project moving forward when he passed the script on to Palm Springs resident and head of Wonderstar Productions, Kim Waltrip. “It was a Sunday and I had a stack of scripts to go through. I knew the Van Patten’s and sometimes it’s difficult when someone you know (and like) gives you a screenplay to read. So, I put it on the bottom of my pile of scripts. I went through six or seven scripts and nothing really grabbed me. I started reading “Walk to Vegas” and started laughing and turning pages! It was such a fun and hilarious story that Vinnie and Steve wrote,” recalls Waltrip who helped put together a great team for the project including first-time director Eric Balfour and Award-winning Producer Mark R. Harris (Crash, Gods and Monsters) among others.

“One of the biggest challenges with this film was replacing money that dropped out two weeks before production. There are always challenges in making movies and this was a big one. We wanted to keep the integrity of the story and then money dropped out. It was Denise DuBarry that came in to save the day! We were fortunate to take the time we needed with this film and not have the pressure of time that often comes with money restraints,” says the project champion. Filming locations included Los Angeles, Las Vegas, Palm Springs, and Joshua Tree. Waltrip says the pickup days in the desert were definitely the most fun and no doubt this will be on display Friday before a sold-out Richards Center for the Arts crowd. “It’s really poetic that we are able to have our World Premiere here so many years after Sonny’s first event,” she adds. 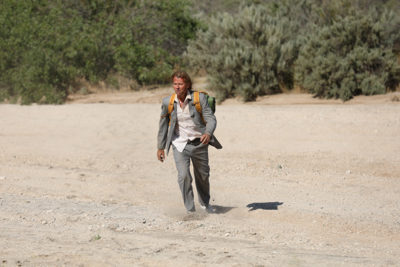 “It’s pretty ironic that the seed money Kim (Waltrip) and I, along with so many others, helped raise for this festival over thirty years ago has become such a world-class festival. We are ecstatic to premiere our film here as it comes full circle back to Sonny (Bono),” Vince reflects on the first tournament Sonny organized to raise funds for the first festival. Kim Waltrip, the film’s producer was also at that inaugural fundraiser. “Having been at the first event and returning with this film on the thirtieth anniversary with Vince and Jimmy is special. We were all there with Sonny and to see what this festival has become is incredible. Our after party will be our way of giving back and to continue to support PSIFF,” says the President and Director of Wonderstar Productions, who also served as the film’s producer.

The film will have its World Premiere at the 30th Annual Palm Springs International Film Festival on January 11, 2019, at the Richards Center for the Arts in Palm Springs at 4 pm. Following the screening, January 11th, 2019 6:30 pm to 9:30 pm at Eight4Nine Lounge there will be Fun, Food, Drinks, Games (hijinks may ensue), Celebrities and a crowd of good-willed people helping to raise money to benefit the Palm Springs Film Society. Tickets Available at Ticket Sauce: https://ticketsauce.com/e/walk-to-vegas

More information about the cast, crew and film can be found at: www.walktovegas.com