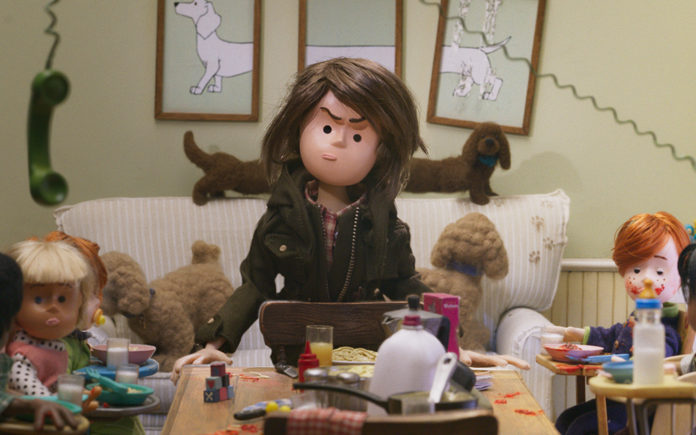 There are treasures throughout the Palm Springs International Short Festival and one of the gems is the animated film Freaks of Nurture from Canadian filmmaker Alexandra Lemay, which has its world premiere this week. 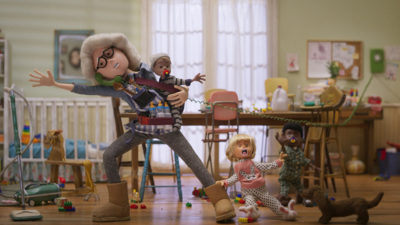 Freaks of Nurture is a six-and-a-half-minute, stop-motion film about a mother-daughter relationship inspired by the filmmaker’s own unorthodox upbringing with her single-parent mom, who is extremely busy being a foster parent, dog breeder and artist.

Wonderfully crafted with incredible detail, the film is playful, self-deprecating, and filled with great humour both rowdy and sly.  The story reveals a chaotic family dynamic and the revelation of what it means to grow up, become independent, and yet still crave the love and support of a parent.  There is also the akward awakening when one realizes we are perhaps more like our parents than we ever thought.

CVW: What did your mom think about the film?

AL: I’m not going to lie, I was terrified to show her anything and waited a really long time before I did. When I wrote my proposal for the film, I showed my sister and her initial reaction was an uneasy “ummm … did mom read this?” It’s tricky because my family didn’t choose to be in this film and having this imposed on you is a little invasive. I had to explain to them how I needed to basically simplify or exaggerate reality to fit what I was trying to say to the point where the result probably wouldn’t really feel like them.  Once my mother grasped that concept, she was a real trooper about the whole thing. She’s been very supportive.

CVW: When did you first know you wanted to be an animator?

AL: I was always very indecisive about what I wanted to do when I was younger. I took an animation course and the teacher told me I should really consider going into animation because he felt I had a knack for it, so I applied to Concordia’s animation program. It was Erik Goulet’s stop-motion class that really made me fall in love with animation.

CVW: What’s the best part of what you do?

AL: I thrive as a jack-of-all-trades. It’s really important for me to work in a field that is creatively stimulating with variability. What I love about independent filmmaking is that I can do it all; I get to write, draw, build, animate and edit… for Freaks of Nurture, I even did voice acting! One of the best parts of this project was that I got to collaborate with great artists as well Laurent Canniccioni and Emily Bélanger, the duo that runs Studio Jako Lanterne.They built the sets for the film and they did a fantastic job.

CVW: How much time did it take to make this film?

AL: It’s hard to determine exactly how long a project like this takes because you’re brainstorming in your sleep before anyone even knows about it. I proposed the film a few months after completing All the Rage, my first National Film Board (NFB), project. At first it’s a slow process, it took about a year on and off of script writing and storyboards, prototype building and animation tests until I got an animatic good enough to get me officially signed into production. Then it was about 6 months of building and 6 months of animating, so overall about 2 years.

CVW: Do you consider yourself an artist first and a filmmaker second? 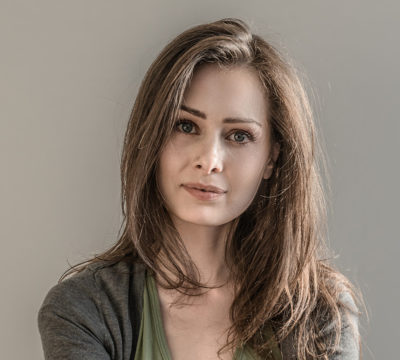 AL: I’ve found it hard to simply label myself as a “filmmaker” but I do consider myself a storyteller at heart. After Concordia University, I went to Sheridan College to study practical special FX because I wanted to learn more about puppet making. I ended up working as a fabricator for years after graduating (ironically, making dinosaurs and other large-scale replicas instead of miniatures). Although I had a lot of fun doing it, I missed the storytelling that animation brought to the table. There is something truly magical about animation that I haven’t been able to compare to any other art form.

CVW: What did you learn about yourself that most surprised you during this project?

AL: Making Freaks of Nurture was fuelled by adrenaline, self-deprecation and humour. I was so scared to insult my mom that I felt the need to poke fun at myself as much as her. The experience made me realize how similar we actually are. All the things my mother does that inspired me to make this film are things I do as well in my own way.  The whole experience was truly surreal.

Freaks of Nurture was written by Lemay and Julie Matlin, with music by Judith Gruber-Stitzer and voiced by Emmy and Tony award winner Amanda Plummer.  The film is produced by Maral Mohammadian and executive produced by Michael Fukushima for the NFB’s Academy Award-winning Animation Studio in Montreal.

The film was produced by National Film Board of Canada, which generates groundbreaking animation at its studios in Montreal and at NFB centres across Canada, as well as via international co-productions with many of the world’s leading animators.

The NFB is a leader in developing new approaches to stereoscopic 3D animation and animated content for new platforms. The NFB has created over 13,000 productions and won over 7,000 awards, with NFB animation accounting for 7 of the NFB’s 12 Oscars, as well as 6 grand prizes at France’s Annecy International Animated Film Festival, 4 Palmes d’Or at the Cannes Film Festival and 2 Golden Bears at Berlinale. To access acclaimed NFB animation, visit NFB.ca or download its apps for mobile devices.

Lemay will be present at the PSISFF World Premier of her film.

Freaks of Nurture screens in the “All in the Family” program, Thursday, June 21 7:00pm.  For more information and tickets visit the box office or purchase online at www.psfilmfest.org.