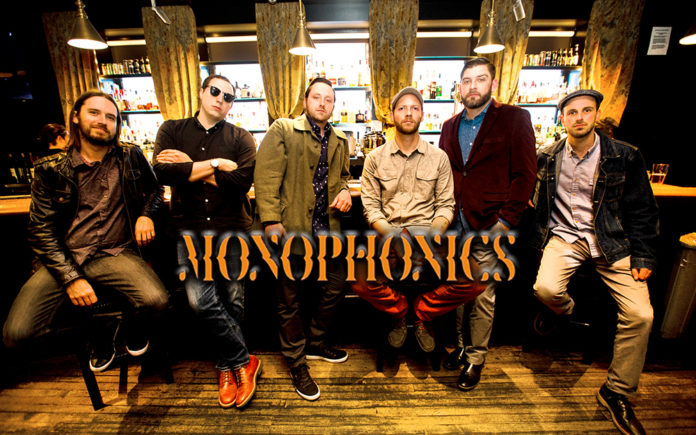 “One of the best live soul bands that I have ever seen!” says Al Bell, co-founder of the legendary Stax Records.

To those unfamiliar with the Monophonics, you are in for a treat on Friday, October 5th at the Joshua Tree Music Festival.  Led by frontman and organist Kelly Finnigan, this San Marin-based band likes to describe their sound as psychedelic soul as they incorporate the elements of many musical genres in a manner that makes for electric shows and recordings that are infinitely listenable.

Many call their sound hippie jazz/soul.  One can understand the difficulty in categorizing this band as they incorporate the neo-jazz sound familiar to the Northern California area with acts like Soulive, Greyboy All-Stars and Karl Densen as well as the New York City-based Dap-Kings (RIP Sharon Jones) yet show the heavy influence of legendary acts like the Tower of Power, Sly & the Family Stone, Temptations, and Joe Cocker.

Founded in 2005, the band was initially instrumental-only playing a fusion of funk, soul, jazz and Afrobeats under the name Monophonics Orchestra.  Finnigan joined the band five years later, adding his powerhouse vocals and keyboard skills to an already highly regarded up and coming Bay Area band.

While on break from a recording project that he is working on in Nashville, Kelly Finnigan mentioned that it was never his intent to be a front man to a regularly touring band.  This San Fernando Valley native’s plan was to become a studio musician working in Hollywood in relative anonymity – yet here he is – the front man to a band that travels the world.  When asked where his favorite places have been while travelling, Finnigan does not hesitate, “Greece.  They embrace us.”   Greece fell in love with the band following the 2012 release of In Your Brain and the remake of the Sonny & Cher classic, “Bang, Bang.”

Finnigan found tours of Africa and Morocco to be the most inspirational musically.  When asked which countries he would like to tour that they have not visited yet, Finnigan cites Brazil, Australia and Italy as well as the need for a longer trip to Tokyo where the band recently performed but had no chance to get to know its people and culture.

A student of all genres of music, Finnigan’s major influence comes from the Beatles due to the “perfection of their recordings,” he says.  “O.V. Wright, Sam Cooke, the Zombies, Crosby, Stills, Nash and Young…Brian Wilson – they were all major influences on my musical development.”

When asked which current artists he thinks we should be listening to (other than the Monophonics…seriously people, see them this Friday), Finnigan ponders the question for a moment before saying, “I’m excited about all genres really, but if I had to name a couple that I’m currently excited about, one is The Sha La Das on Daptone Records.  If you are interested in reggae, keep an eye out for Junior Thomas & the Volcanoes next record.”

While Finnigan seldom listens to their recordings, he is proudest of “Strange Love” the seventh track from their 2016 release Sounds of Sinning.  “The song sounds exactly like I envisioned it.  Often when collaborating or moving a song from an idea in your head to a recording, things change.”  Finnigan makes it clear that the changes do not mean that the song is necessarily better or worse that the original idea, it is just different.  “Strange Love” is the closest thing to creating a song that sounds exactly like what was in his head.

Finnigan offers this advice to young musicians and bands looking to establish themselves, “Patience.  Persistence.  Sacrifice.  Be reliable.  Be hard working.”  Finnigan made it clear that an artist has to treat their music like any other business.  Show up for work on time and straight.  Like any other job, be easy to work with.  “Don’t be a jerk. No one wants to work with a jerk.”  Finnigan also urges young artists to avoid being too selective offered opportunities that could advance their careers, “While an opportunity may not be ideal, it may be the only one you get.”

Look for a new solo project from Kelly Finnigan early next year as well as a few new live recordings from Monophonics as well as the first new studio music in three years.