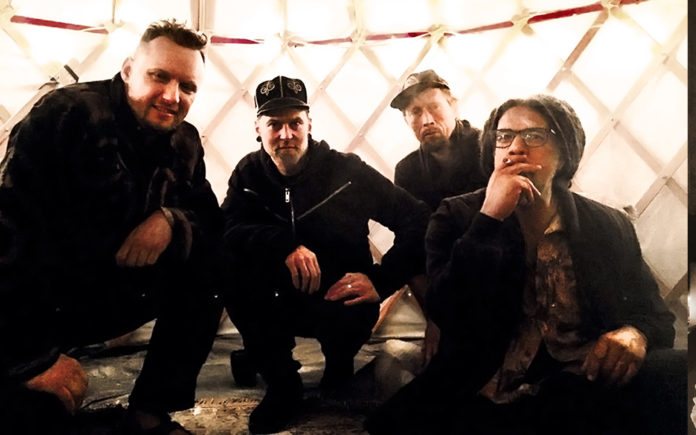 Be forewarned that House of Hamsa’s live improvisational sets leave many concertgoers in trance-like states while absorbing the essence of their music at a spiritual level.  This quartet of musical shamans achieve this feat by weaving modern and ancient instruments with live sampling and sound loops as well as a spiritual underpinning that can best be described as the embodiment of the spirit and nature of the Joshua Tree Music Festival (JTMF).  It should be no surprise then that House of Hamsa is the closing act of this four-day festival at 7pm on Sunday, October 7th.

On drums and samples is South African Inkx Herman who McCoy calls, a bit of a musical legend due to his work with Sting, Paul Simon and the legendary and recently departed jazz trumpeter Hugh Masekela.  For those unfamiliar with Masekela, he is known for his anti-apartheid songs and long-term friendship with Nelson Mandela as well as his 1968 #1 hit, “Grazing in the Grass” which is one of the last jazz records to reach such mainstream popularity.

To understand how House of Hamsa makes this “musical jambalaya,” as McCoy says, let’s make sure that you understand some of the philosophical underpinnings of their music.

A shaman is someone who reaches a trance-like state in order to interact with the spiritual worlds and share healing energies with those around them.

A hamsa is a palm-sized amulet meant to provide protection from bad things and is popular throughout Northern Africa and the Middle East.

When listening to their music, McCoy hopes that each member of the audience is taken on a potent inner journey.    McCoy goes on to explain that it is his objective to “better humanity” with everything that he does.  To that end and in addition to his work with Hamsa, he has recorded four children’s CDs and performs musical comedy as opportunities arise.

Evan Fraser is also part of the trio, Dirtwire, which performed at the Spring JTMF as well as being an original member of Beats Antique.

McCoy and Fraser are part of an Afro Hip Hop inspired band named The Dogon Lights.

As mentioned earlier, McCoy, Fraser and Inkx worked together in the critically-lauded band, Hamsa Lila.

McCoy explains how Hamsa Lila was tough to keep going. “We were a democracy of seven people.  To get seven people to agree on everything is a nice idea but ultimately unrealistic.” Hamsa Lila still performs on occasion with the original seven member lineup.

About 2 1/2 years ago, this quartet formed to begin a multicultural musical journey known as House of Hamsa.

Prior to Hamsa Lila, McCoy performed in a number of bands with varying musical identities.  McCoy shared how a band that he formed in high school was named YOU.  Somehow a band on the East Coast found them and called to say, “We are You.”  “How could they be You if we are You?” McCoy asked them with a hint of humor.  As the East Coast You was stone cold serious, McCoy changed their name to Church Of You which happens to be a fitting precursor to their shamanistic efforts with House of Hamsa.

At present, House of Hamsa can only be heard on Sound Cloud where last year’s JTMF set is available.  Like the Grateful Dead, String Cheese Incident and Phish, House of Hamsa improvisational sets are one of a kind performances that leave listeners craving for more.