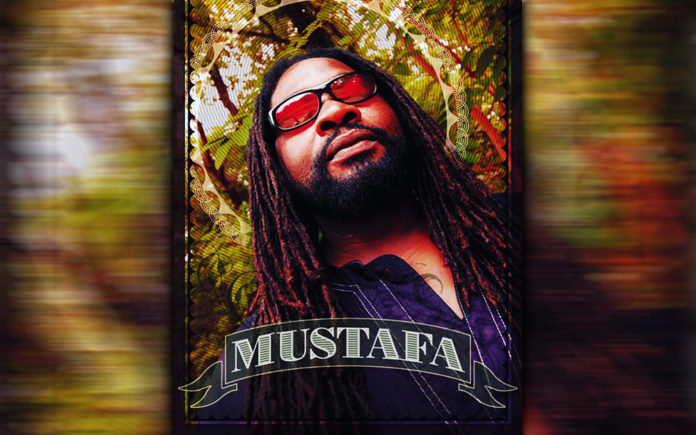 Kicking off this year’s Joshua Tree Music Festival on Thursday are Mustafa Akbar and Raul del Moral at 5:30p followed by Akbar and Afrolicious on Thursday at 9p.

It is easy to see why the Festival starts with a heavy dose of Akbar – he is one of the most sought after vocalists in the business having performed with the Afrikaa Bambaataa, Thunderball, Rare Essence, Afrolicious and countless others.  Akbar is as good at EDM and downtempo as he is at funk, jazz, soul, fusion, rap, hip hop, R&B and the Go-Go sound.  It is this ability to transcend genres that may be why many people outside of the music business are unfamiliar with him.  Thursday is your chance to learn why Akbar is so highly regarded to those in the know.

Despite successes, Akbar has been humbled by a near-death car crash of two years ago.

Originally from Philadelphia, Akbar has called northern Virginia home for the last twenty-four years.  At present, he is in long-term residency in Key West, Florida where he performs with Soulbush three times a week.

When Akbar takes the stage with del Moral at 5:30pm on Thursday, festival goers will be in for a treat as the duo explore experimental, house and dance music while working in some of their solo work.  Expect the first record to drop from these two “sometime in early 2019,” offers Akbar.  Around the same time, Akbar will be releasing four new solo tracks on the EP Attracted as well as a number of remixes on Super Hi Fi Records.

Later in the evening at 9p and as part one of the featured performances of the festival, Akbar will perform two new songs with Afrolicious, “Above the Fray” and another song with a working title of “Get Your Groove On”.  Both are expected to be released in the next few months.

Akbar’s prolific recording history at late can be traced to a near death experience two years ago.  “I almost bought it,” says Akbar, “I rolled my Jeep and broke eight vertebrae in my back and neck.”  Despite extensive injuries, Akbar did not take Oxycontin as prescribed by his doctor as it left his head feeling fuzzy and made it difficult for him to compose.  Rather than taking an addictive opioid, Akbar used a mix of CBD oils and “good ‘ol gangja” to manage pain.  Since recovering fully, Akbar has viewed the accident as “A blessing in my world…I’m recording as much music as I can do.  I’m not holding anything back.”   While not religious in the traditional sense, he is spiritual and like many Joshua Tree Music Festival attendees, works toward living in harmony with those in his life and being a positive influence on those around him.

Akbar got one of his biggest breaks while serving as security director at the after-hours clubs, Red and 18th Street Lounge that was owned in part by Thievery Corporation’s Eric Hilton and Rod Garza.  He was invited to record as part of their Thunderball project.  Akbar is featured on the first track of the 2016 release Scorpio Rising album, Heart of the Hustle.

On his bucket list of people to perform with are any of the guys from A Tribe Called Quest or De La Soul.  Early musical influences include Rick James, George Clinton, Marvin Gaye and Curtis Mayfield.

With a body of work that is hard to find in one place on Spotify or Pandora, but much easier to locate on Amazon Music, some of Akbar’s favorite recordings include his latest solo single, “Get Down with It,” “Funk for Peace” with the Fort Knox Five and the 2010 release “Shift” with the Fort Knox Five and Afrikaa Bambaataa, and “Heart of the Hustle” with Thunderball.  His two solo albums are Natural High and That Day.

When asked which current acts that we should be paying more attention to, Akbar mentions Vancouver DJ, K+Lab and Basement Freaks – two performers who he expects to be working with again in the near future.  Akbar is proudest of his 2016 tribute track to friend John H. of the Fort Knox Five who died in 2014.  Akbar joined Basement Freaks to record the tribute piece, “Little Red Afro.”

Given the sheer number of performers who Akbar works with, one might wonder how these collaborations come into being, “They find me,” says Akbar humbly.

Now it is our turn to find him.  Get to the Joshua Tree Music Festival early this year so that you can get a glimpse of the new Akbar/del Moral project.  A few hours later, Akbar joins DJs Pleasuremaker McGuire and Señor Oz of Afrolicious as Thursday night’s headliner.