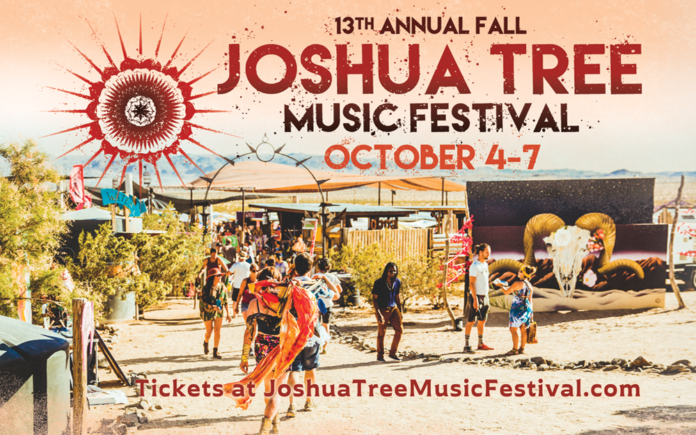 The Fall Joshua Tree Music Festival (JTMF) promises a diverse, lovingly curated line up from around the globe against a stunning desert backdrop.  The festival is a four day event with camping onsite that caters to music loving funsters and families with a sense of adventure.

JTMF is known for hosting musical acts that you won’t have seen at every other festival this summer.  Some line-up highlights include global superstar and women’s rights activist Fatoumata Diawara (Mali), the dynamic Afro-Funk of Jupiter & Okwess (Congo), the electro-groove dance mavens The Egg (UK), the hip-hop & jazz fusion of Selah Poitier (Bahamas), and the raucous blues of Delgres (Guadaloupe).  The Monophonics, Matador Soul Sounds, Jungle Fire and Afrolicious will be keeping the funk alive, while the live-tronica of Everyman, Balkan Bump and House of Hamsa will ensure the dance party continues into the night.

A little closer to home, Joshua Tree is home to a burgeoning and diverse music scene. Local acts Gene Evaro Jr., Myshkin Warbler, Desert Rhythm Project, Jesika Von Rabbit and Giselle Woo and the Night Owls are also not to be missed.

One common thread you will find unites all the artists that take the JTMF stage, is that they deliver a potent live performance that makes an impact. The intimate nature of the festival really adds to this magic making attendees feel that they’re really in on something special.

“No long lines, hectic crowds, or hustle and bustle.  Joyous connections and positive, shared experiences permeate the spirits and minds of our festival-goers because the size of the fest is not too great” says founder Barnett English.

The experience is more than just music. Dozens of Playshops in song, movement, music, didgeridoo, drumming and more are scheduled throughout the weekend. Yoga classes from sunrise to sunset, a World Market & Healing Oasis can all be found on site. A robust schedule of activities at Kidsville places JTMF among the leading family-friendly festivals in the USA.

Founded in 2003, the Joshua Tree Music Festival takes place every May and October at the gateway to the world-renowned Joshua Tree National Park. The four-day festivals are immersive, inclusive, and inspiring experiences. Family and friends come together with passion, purpose and a mission to foster social interaction on a deep level, and to create positive, life-changing moments. The music is fresh, featuring up and coming artists and encompassing all genres and corners of the globe. Participants are encouraged to experience a variety of multidisciplinary workshops, such as yoga and movement, visual arts, music, and myth. A robust schedule of Kidsville activities makes JTMF one of the top family-friendly festivals in the country.

LIVE/LOVE Like There’s No Tomorrow – that is the tag line for this year’s Joshua Tree Music Festival (JTMF).  For those uninitiated in what this festival is about, it is about peaceful coexistence and happiness…being thankful for all we have and shunning all that makes us unhappy and stressed.  Stated differently, JTMF is a gathering of hippies, wannabe hippies and music fans all ages and all political beliefs that choose to exist in harmony such that a 4 year old or a 94 year old can feel comfortable and safe while attending.  For at least four days, festival goers can escape a world seemingly in perpetual chaos where money and power seem more important than living in harmony with fellow inhabitants.

This festival is part of an emerging modern day hippie movement.  Where hippies from the 60s might wear dye-tie t-shirts, let their hair grow long and do drugs, today’s hippie is far more fashion forward.  Women dress to be noticed while some men sport beards and man buns – fashion styles lost on Birkenstock-wearing hippies.

Today’s hippie prefers to eat healthy, sustainable food.  Meditation circles and yoga are meant to keep the mind and spirit in as good a shape as the physical body.  Many will vape cannabis as part of their effort to open their minds to a higher energy while others imbibe simply because it feels good and gives a reprieve from the constant stimulation of modern society.

Below are a few performances that deserve your attention at this year’s festival:

My top pick is closing act, House of Hamsa.  This quartet of musical shamans achieve this feat by weaving modern and ancient instruments with live sampling and sound loops as well as a spiritual underpinning that can best be described as the embodiment of the spirit and nature of the Joshua Tree Music Festival.

Friday night features an act that Al Bell, the co-founder of the legendary Stax Records once called, “One of the best live soul bands that I have ever seen!” He was referring to the Monophonics who perform Friday at 8:15p.  Following the Monophonics at 11:30pm is the one and only Jesika Von Rabbit with her postmodern alternative musical stylings.

Get there early as local band Desert Rhythm Project takes the stage at 4:45pm when they share their neo-roots, reggae, funk and soul sounds that should not be missed.

Saturday afternoon features a performer that you must catch – Selah Poitier.  From the Bahamas, this singer/songwriter is at the very start of her career.  She plays the upright bass is reminiscent of a young Diana Krall or Esperanza Spalding.  Poitier performs on Saturday at 1:45p.

The Delgres are another must-see act on Sunday at 1:45p.  This trio blends the Delta Blues with Caribbean elements by including instruments like the dobro, and Sousaphone to create a sound that is reminiscent of the Black Keys or Hugo Race.

Last but not least, do not be late to the festival as it starts out on Thursday at 5:30p with a heavy dose of Mustafa Akbar as he opens the festival with Spaniard Raul del Moral before joining Afrolicious a few hours later.  In between those performances, see highly-regarded local, Gene Evaro, Jr. at 6:30p.

Hope you can make it – this should be the best festival yet!