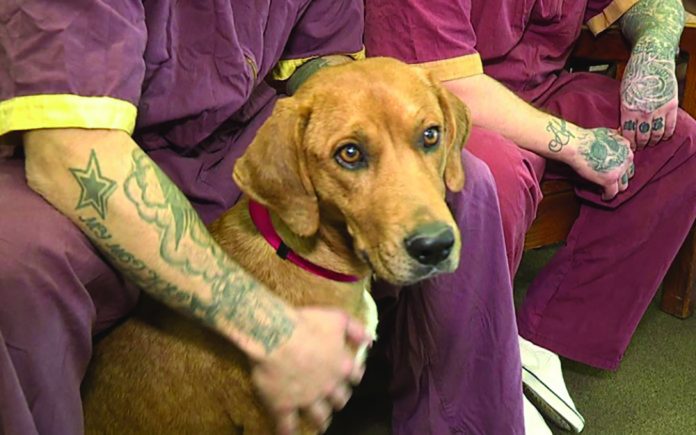 For over 25 years, innovative programs throughout the country have paired rescue dogs with prison inmates. Participants who complete these programs have an extremely low rate of recidivism. In 2021, our criminal justice system is under renewed scrutiny to do better. Once again, dogs are our heroes, transforming the lives of incarcerated men and women who previously had no hope for a changed life. It is our hope that Riverside County will implement such a program.

Service dogs are the eyes for those who cannot see, the leaders for people unable to walk, and the healers for those suffering from emotional illnesses such as post-traumatic stress disorder (PTSD). For some service dogs, it all began behind bars….

Before Puppies Behind Bars, an inmate named Tom spent most days watching television in his cell and pumping iron. Tom spent over thirty years in prison on a conviction for second degree murder. Tom explained the difference the dogs made in his life, “In the prison system, you shut down your feelings. You gotta do that to survive, because it’s hard. But the dogs brought me back, you know, to the human side.” He had an incredible success rate of 6-0 with all his dogs successfully graduating, a success that gave him status within the prison and hope within himself.

Tom took on a dog that was failing in the program, a beautiful Golden Retriever named Tuesday, a dog that later became the subject of a best-selling book UNTIL TUESDAY. Tom began his relationship with Tuesday by simply laying down beside him for three hours without saying a word. He describes his first impression of Tuesday, “Tuesday has such sad eyes, especially when he’s wounded, that at seven months old he probably looked like exactly what he was: a lost kid. When I think of him then, I see a perfect picture of longing, of innocence at the moment it discovers there is pain in the world.”

Tom looks back on those days, “The only way the prison system could win was to get me to hate, and being around the dogs and everything, the hate was totally out of the picture.” Today Tom owns a dog training business with his wife, providing a second chance for troubled dogs that others gave up on including many pit bulls. Inmates who participate in the Puppies Behind Bars program acquire job skills and exit prison to enter careers as vet technicians, kennel workers, and animal trainers.

Founded in 1997, this innovative program in New York initially trained dogs for people with physical disabilities. After 9/11, there was an increased demand for bomb sniffing dogs. Later they began training dogs to assist veterans returning home from Iraq and Afghanistan with PTSD, acquired brain injuries, and physical conditions. The dogs spend 20 months with their inmate trainers, living with them in their cells. Here, it’s the dogs that get weekend furloughs in outside homes to gain exposure to things they don’t encounter in prison such as doorbells and elevators. The dogs learn an amazing 80 commands.

A similar program, Pups on Parole, began in Las Vegas when a rescue group called Heaven Can Wait Animal Society didn’t have enough foster homes for the dogs they rescued. The dogs are placed with specially chosen inmates in the female correctional facility. The abandoned and sometimes abused dogs needed a place to heal before going to adoptive homes in the community. Inmates have all the time in the world, but for dogs on “death row” in shelters time is of the essence. Famed trainer Cesar Milan helped develop the training curriculum. One of the program coordinators wrote this poem about her experience:

Los Angeles County started a rescue dog training program in their jails in 2012. California inmates have a recidivism rate of 67%. They come out of prison with few job skills after learning unsavory “tricks of the trade” from fellow offenders. Millions of shelter dogs, whose only crime is not having a home, languish behind bars without hope. It costs California taxpayers an average of $57,000 per year to house an inmate. It costs California taxpayers an average of $426 to capture, house, and then euthanize a shelter animal. Who rescues who? After exposure to these wonderful canine creatures, confidence replaces fear, purpose replaces idleness, and hope for a better future replaces anger.