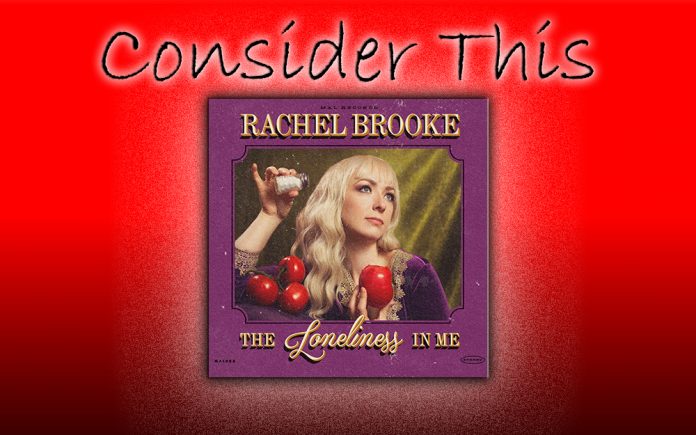 “Nashville called saying ‘where have you been?’ I said I’ve been perfecting my domesticated grin, they said, ‘well, you know we’d like to offer you a deal, you don’t have to pay your dues, but you gotta pay the bill/We’ll work on your image and we’ll draw you a crowd, cuz if no one hears your record drop does it make a sound?’ No thanks, I’ll pass, I got MY ego naturally, it’s the loneliness in me.”

That’s Rachel Brooke rejecting the trappings of Music City on the title track of her excellent new album.

Rachel grew up in the tiny town of Lovells, Michigan, part of a musical family. Her dad played banjo and guitar for many Michigan-based Bluegrass bands, and her mom played upright bass. At age six she began taking piano lessons, then moved on to drums, percussion and guitar. It was never even a conscious decision, she just followed family tradition and made music her career.

She cycled through a series of bands as a teen, most notably playing drums for a couple of female-centric Detroit-based Punk bands, Crime Disease and The Clots. A few years later, she was playing a lot of Bluegrass in her dad’s band. It was there she learned the basics of banjo and mandolin. She went solo just before her 22nd birthday and her self-titled debut arrived in 2008.

In the ensuing years she has effectively nurtured her solo career, releasing Demos in 2009, Down In The Barnyard in 2011 and A Killer’s Dream the following year, along with a clutch of 7” singles. She recorded Junk, a duo effort with Brooks Robbins in 2009. That same year she partnered with Lonesome Wyatt and created a Gothic Country album Bitter Harvest. Six years later they followed up Bad Omen. Most recently she and Brooks Robbins formed the indie Country band Modern Mal and recorded The Misanthrope Family Album which arrived in 2017.

Last year, her beloved dad, Barry, passed away. His presence is felt all over her newest solo effort, The Loneliness In Me. On the opening cut, “It Ain’t Over ‘Til You’re Crying,” Rachel’s flinty vocals, which recall past Honky-Tonk Angels like Kitty Wells and Tammy Wynette, crest over weepy pedal steel, dolorous guitars and a chunky beat. The melody (ironically) shares some musical DNA with Donny Osmond’s magnum opus, “Puppy Love.” But her lyrics completely flip the script on the “Baby, Don’t Get Hooked On Me” paradigm (R.I.P. Mac Davis). “Like a moth to the burning sun, I want to see how close you’ll come, it ain’t about you baby, it’s all about me, I keep you around, tethered and bound, ‘til you beg for mercy/Then after you’re gone I might just give you a call, tell you I love you, but you ain’t worth the fall.”

A couple of tracks, “The Hard Way” and “Ghost Of You” are suffused in sadness. The former is anchored by a rattle-trap beat, pensive guitars, plaintive keys and sighing back-up vocals. Rachel is front and center, learning to navigate the rocky shoals of heartbreak as she addresses an ex; “One day I’ll surrender my longing for you, I’ll cast off my burdens, my sorrow and chain, on the day that I’m over you/But that’s very far, the hard way is still a hard way to learn.”

On the latter, searing fiddle notes and keening pedal steel lattice over strumming guitar, slithery bass and a kinetic rhythm. The vibe is suitably spectral as Rachel seems to summon the spirit of her dad; “I can hear you calling my name the way you used to do, cuz every time I take a drink, the closer I get to you/And every time I hit the streets, I go out and walk the line, the ghost of you comes with me, because the ghost of you is still mine.”

The best songs here manage to be equal parts vulnerable and defiant. “Great Mistake” is a shimmery slice of Country sunshine. Burnished guitars connect with buoyant bass lines and lush keys over an insistent shuffle rhythm. But the winsome melody and arrangement can’t camouflage feelings of contrition and regret; “I was always chasing rainbows, to me that never did grow old, while I was chasing some new heaven, someone stole my pot of gold.” Rachel seems to be channeling her inner Joni Mitchell, who once lamented, “don’t it always seem to go, that you don’t know what you’ve got ‘til it’s gone?”

“Picture On The Wall” is pure Honky-Tonk ache, powered by rippling piano, piquant guitars, a walking bass line and a rock steady beat. The lyrics offer a tender encomium to her late dad; “Like your picture in that frame, your love has faded just the same/But I’m holding on with every breath, your love has gone but my heart don’t know it yet, now I know you held on as long as you could, but I’m still here, living out our dreams just like I vowed I would.” Sparkly piano intertwines with stinging guitar riffs on the break.

The title track is a twangy two-step that weds reverb-drenched guitars, prickly bass lines and sawing fiddle to a snappy backbeat. Rachel doesn’t lament her loneliness as much as embrace it. After blowing off her mom and dissing her boss, she offers up some explication; “It’s just the loneliness in me, the loneliness in me, oh that loving misery, my only friend and my very best, worst enemy/I sit up on my queendom that I rule alone, now that’s the loneliness in me.”

Three songs toward the end of side two serve as something of a Torch & Twang triptych. “Lucky And Alone” is as slow as molasses, blending loose-limbed guitars and willowy pedal steel. Rachel is blunt and brutal as she blithely breaks up with a still-besotted beau; “Now I’ll summarize, there won’t be tomorrow, my love can’t be given, it can only be borrowed, lucky and alone/Your cup runneth over for too long, here’s toasting to me, and all that I’ll be, lucky and alone, oh I kept you around, but I wore the king’s crown, your misery is clover to me, lucky and alone.”

Despite the dour title, “The Awful Part Of Me” is sweetly dreamy, cocooned in gossamer strings and a kick-drum beat. Somehow, the sangfroid displayed on “Lucky..” has abandoned her, leaving only doubt and insecurity; “Down her at the bottom of your dried up wishing well, I’m living on your borrowed dime, you’re living on my hell, the wildfire in me lights a path so you can see, you only love, you only love, the awful parts of me, but you can have it all, revenge and apathy.”

Finally, “Undecided Love” oscillates somewhere in between.  Shivery pedal steel sidles around shadowy guitars, languid keys and a clip-clop beat. Somewhat uncharacteristically, she plays the cuckquean; “I wish you would say I’m your only one, while you wait for the sign that would make you mine, I’ll be waiting next in line.” Ugh, has Helen Reddy (R.I.P.) taught us nothing?

Other interesting tracks include the loping shuffle of “It Won’t Be Long,” which features fleet fretwork and some crackling lead guitar on the break. Meanwhile, “The Lovells Stockdale Blues” is a restless outlaw saga that echoes classics like Hank Williams Sr.’s “Lovesick Blues” and Johnny Horton’s “Honky Tonk Man.” The album closes on a yearning note with “I Miss It Like It’s Gone.” A bare-bones cri de Coeur that unfurls like a backporch haiku to motherhood.

The Loneliness In Me is something of an aural snapshot. This record captures a moment in time for Rachel Brooke, full of grief and hope, humor, spirit and attitude and gratitude.