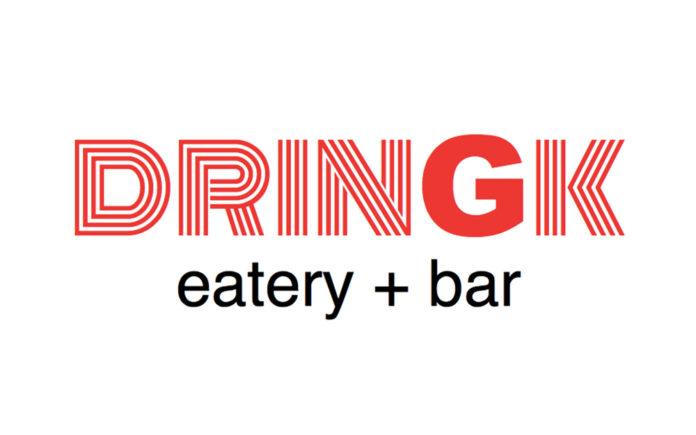 If you’re looking for a spot with a whimsical playful vibe, and tasty menu that won’t stretch your funds, Dringk Eatery + Bar in Rancho Mirage is the place to be.

You might do a double take when entering Dringk Eatery + Bar at The River in Rancho Mirage, “Wasn’t this Fox & Fiddle a minute a go?” could be a question that would run through your mind. The answer would yes, it was the former pub style restaurant not so long ago. Owner Kurt Gardner opened the former restaurant in February of 2017, and after seeing that the pub concept hadn’t grabbed the attention as he had hoped for, he decided to switch gears.

Gardner’s new concept Dringk, is all his own and doesn’t have the restrictions that the franchise of Fox & Fiddle had, allowing him to run free with his creativity. Dringk (the phonetic pronunciation of Drink) has a laid back, adult playground feel, complete with hanging chairs, longer than long couches, a pool table, shuffleboard, dart board, Pac Man, Jenga blocks and more, highlighted with spiraled white Twizzler looking ceiling décor. 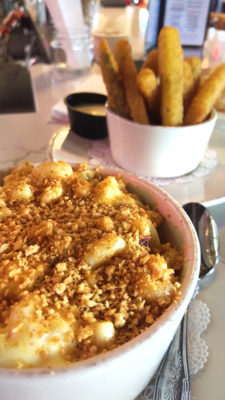 Besides the aesthetic change to the restaurant and bar, is the seemingly perpetual happy hour type price point that they have adopted, with a variety of well drinks and house wines priced at only $5, domestic beers at $4, and imports at $5. Martinis can cost a couple of dollars more, as well as if you want to upgrade to a call brand, but even they are reasonably priced. Their food prices mirror their drinks, with small plates starting at $5, and other menu items topping out at $15 (only a couple of dinner items are $20). This new concept has been working for Gardner, “It has been very well received,” he said. The hangout has become a place for late night enjoyment, where D.J music is played on Friday and Saturday nights (soon to be added for Wednesday’s Industry Night), as well as Karaoke on Tuesday nights. This kind of late night entertainment is a welcome addition to the somewhat sparse selections that this part of the desert offers.

I was interested in trying out some of the menu items at Dringk, and went for some that I had pre-selected from their website. I brought my dear friend Jennifer Gary along to assist me. We started with the Brussel Sprouts (crispy fried with balsamic, grilled lemon, chili flakes and chipotle aioli). The sprouts were extra crispy, just the way that I like them, and the balsamic added just enough sweetness to balance off the natural bitterness of the sprouts, with the chipotle aioli giving the dish a spicy creamy component. Delish! 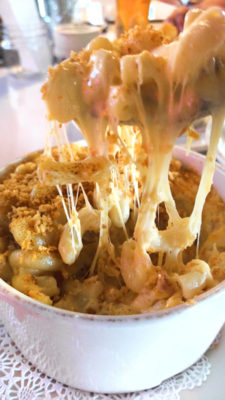 Next I selected the Truffle Mac & Cheese (cheddar, mozzarella, truffle oil, optional bacon, and bread crumbs) for me, and she went for the battered Fried Zucchini & Dill Ranch and the Grilled Onion Hummus & Pita. As a mac & cheese freak, I had to try it, and was not disappointed by its overt gooey cheesiness. It was thick and smooth, as the cheese clung to my fork leaving long ribbons of it bridging from the bowl, with generous meaty pieces of bacon, it’s this cheese lover’s new bestie! Jen enjoyed the lightly battered Fried Zucchini, and the Grilled Onion Hummus dish had dense flavors, leaving a delightful memory on the palette. As it was in the middle of the day, we did not indulge in any “adult” beverages, but if we had, I probably would have gone for a Lavender Vodka Lemonade or Jalapeno Margarita, both only $5 each.

Dringk food menu extends from appetizers to sandwiches and burgers, flatbreads, to salads, soups and full dinner entrees, all reasonably priced. The spot is opened from 3pm to 1am Monday through Wednesday, and 11am to 1am or later the rest of the week (until midnight on Sundays).

We all need a place to unwind, without high prices and restricted ambience. Dringk Eatery + Bar provides some not so serious adult fun, where you can just chill out with friends and have some laughs, great food and drinks and still have some money in your pocket at the end of the night. I’ll cheers to that!