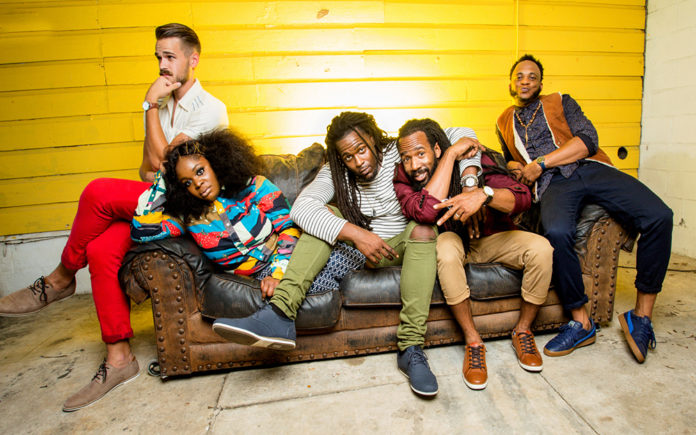 Meet the new New Orleans sound sure to give rise to butterflies with a mesmerizing authenticity only found in The Big Easy. This ten-piece act combines flavors of the old tried and true with the new modern spice that blends into a beautiful sonic gumbo of soul meets funks with a dash of Disney-esque playfulness wrapped in schoolyard rhymes and poetic spoken word that seduces while it sizzles. This mega-act stormed on to the scene after winning the 2017 NPR Tiny Desk Contest, and are destined to defy genre labels and guaranteed to make you smile as you watch these grown-up kids play on stage. Tank is like an explosion wrapped in skin, an atom bomb of love waiting to infect your heart.

Tank and the Bangas gives poetry in motion an all new meaning. Blending the sounds of old New Orleans and slamming like poets the sounds of the new New Orleans, this mega-group defies genre while they demand your respect and attention. I was able to chat with Tank, a powerful princess from an alternative Disneyland that embodies the famous Einstein phrase: there is nothing more serious than a child at play.

CVW: How does a concept like Tank and the Bangas come together?

TANK: “Like poetry! Poetry is a really important part of what we do. I think the slam circles in New Orleans and the open mic nights let me be more on the fly and that allows all of us to flow with each other. We’ve all had a lot of time to get to know each other and that gives me a lot of confidence to be able to experiment and know that they will be behind me no matter where we go.”

CVW: There is a lot of playfulness with everybody in the band, but you are the clear ringleader of rhyme and reason. Is this an intentional part of the band?

TANK: “Haha! Yeah, we like to have fun like kids and are basically just adult kids playing with each other. We spend more time together than we do with our own families and are growing, learning together. It’s like being in high school together, but why let the kids have all the fun? Adults should be able to play, too. We like to encourage that.”

CVW: What does it mean to you to be playing at Coachella?

TANK: “It’s BIG! This is the biggest stage we will play this year and it’s definitely the moment we wanted, but it’s a lot of work, too.”

CVW: Where does all your energy come from? You are like an explosion of humanity trapped inside a body.

TANK: “OH, I like that! That sounds good. I don’t really know. I’m a fat girl that likes ice cream. I said ok, it’s 45 days before Coachella, I need to go vegan. Yeah…nope that didn’t happen, But, I’ve been exercising to keep my energy up. I think the energy is part me, part band and part crowd. We definitely feed off of the crowd and feed each other, too.

CVW: The whole band looks like they are always having fun. How did you build your chemistry?

TANK: “We love having fun and watching other people in the audience having fun, too. We don’t want to be the only adults acting like kids! But I think our character gets built in elementary school through high school when our personalities really are developing. It comes down to what you did when someone asked you to borrow a crayon, you know. That’s what this band is like; we’re just all sharing crayons with each other and coloring outside the lines.”

CVW: How does all of this color get blended into what we experience in the audience as a genuine original and authentic flavor of sound and performance?

TANK: “I mostly come up with the words and Joshua comes up with the musical parts then everyone else joins in and we have Tank and the Bangas!”

CVW: How did you discover you had talent and wanted to perform?

TANK: “When I was a little girl, it took me a long time to learn how to sing. I liked to write songs, though. My dad was always singing and playing music like Stevie Wonder, The Temptations, LeAnn Rimes. I watched a lot of Disney, too and later Def Poetry Jam. It came over time really but it was the slam poetry that was not so much singing but performance, I guess.”

CVW: How does growing up in New Orleans influence you?

CVW: How do you describe your music?

TANK: “It’s New Orleans but we think of it as the new New Orleans. It’s rooted in tradition, but also breaking molds. It has its traditions and all of that but not just that. It’s all of it and all these other things, too. We’re still navigating and curating our creativity.”

CVW: What is different about playing music at this level than where you were even a year ago before winning the NPR Tiny DesK Competition?

TANK: “It’s now about being there and doing sound check, then outfit check! I have to make sure I look good and thinking about all the people is a lot to think about. I have to wake up early every day and I’m not a morning person. The biggest change was more personal. I woke up one day and realized I could no longer count on who I was, the person I was that got me here. I had to change that person to get to where I’m going. I can’t just eat a pile of ice cream because I feel like it or sit on the couch and binge on Reality TV like I used to. I have to make a plan for every day. It’s a change for the better but I didn’t know if I wanted to put in the work.”

CVW: What made you decide to put in the work?

TANK: “I have a lot of people around me that believe in me more than I believe in me. I’m grateful I have a team of good people around me and not just the ones in front of me, it’s just as important to have a team that’s behind you, too. They encouraged me to never stop growing. This weekend we are playing Coachella but two years ago we were walking around asking if we could play, going into barber shops and asking if we could sing, then getting little clubs. It’s crazy.”

CVW: What is most rewarding for you about putting in the work?

TANK: “The best part is being able to touch someone else. Isn’t that the whole point of being out in orbit, to create a spark for someone else? Someone did it for me and it touched me. Now, I have to do it.”

CVW: What advice do you have for people going after their dreams?

CVW: Anything else you want to share with us?

TANK: “Oh, we have a live vinyl coming out. It was recorded straight to vinyl and that is the only way to listen to it. It will be released on April 20th in New Orleans at Independent Record Store. And I’m really excited to see Beyoncė.”