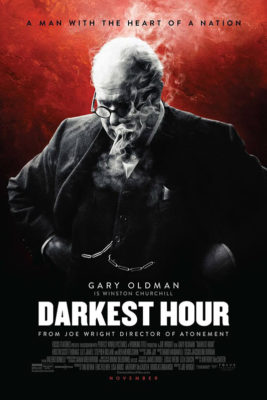 Gary Oldman’s career-defining performance brings Winston Churchill to life during the early days of WWII when France was fractured and falling and Britain was facing a relentless and seemingly unstoppable NAZI invasion.  With the allied army cornered – or trapped – on the beaches of Dunkirk, the fate of Western Europe hangs in the balance and the leadership skills of the newly appointed British Prime Minister.

I loved the seeing Winston’s process of finding the necessary confidence to face the ultimate choice of negotiating with Hitler and saving the British people or rallying the nation (“blood, sweat and tears”) to fight against the overwhelming odds.

It’s said that God places some men in the right time and place to enact His will on earth.  Certainly one can make an argument for Churchill being one of those special heroes.

This wonderful film makes real the four weeks in 1940 when a courageous hero rose who changed the course of world history.  Don’t miss Oldman’s Oscar worthy turn as a real human being super hero who never donned a cape.  This one has it all:  great writing, acting, directing, score and cinematography.  A special nod to Kazuhiro Tsuji’s extraordinary practical makeup (no CGI).   Big recommendation.

ON WINGS OF EAGLES 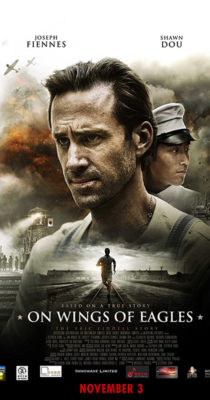 Based on a true story that chronicles the final years of China’s first gold medalist and one of Scotland’s greatest athletes, Eric Liddell.  After winning Olympic gold in the 1924 Paris Olympics, Liddell (Joseph Feinnes) returns to China where he was born to missionary parents, to teach local school children.

In 1937, the Japanese invade China at the outset of WWII.  Liddell and his friend XuNiu (Shawn Dou), a street-smart resistance fighter, recognize the increasing danger so Liddell sends his wife, Florence (Elizabeth Arends), and their two daughters to safety in Canada.  Duty-bound, Liddell stays behind to minister to the civilian victims.  Soon, Liddell and other foreign nationals are rounded up, taken as prisoners and placed in one of the many Japanese internment camps where they suffer and endure for two years.

This fine film reminded me of Angelina Jolie’s “BROKEN,” but I was more moved and engaged thanks to Feinnes’ deeply felt performance.  Sometimes the hardest character to play, according to actor friends, is a good guy doing good.

Eric Liddell’s legacy of hope continues to this day where he is admired and widely regarded as a champion of life.  Liddell was an exceptional man who believed in the innate goodness of the human race and never feared doing the right thing in the worst of times.  Another all too rare cape-less superhero that deserves recognition.  Sony Pictures Home Ent.  DVD.  Recommended.