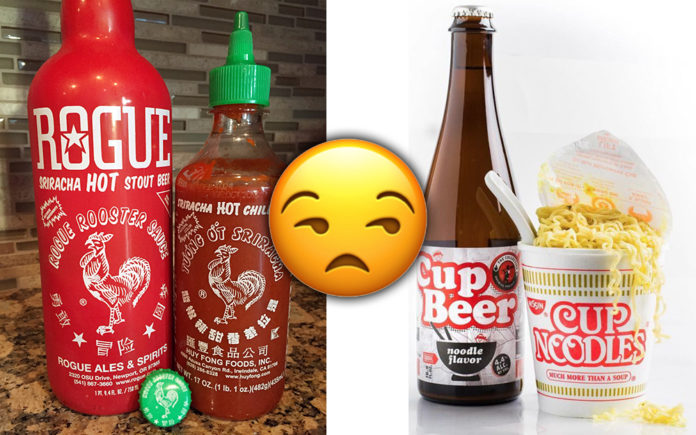 Last week, I lost sleep over the existence of glitter beer and I gotta be honest, I’m still mad about it. I’ve had beer with captain crunch in it, I’ve even had beer with Sriracha in it, but a beer covered in glitter like it’s about to hit stage #4 at the Spearmint Rhino, no way! Miss me with that bullshit.

Well anyone who knows me, knows I love to be angry over beer, so friends made a point to tweet me the most ridiculous beers they could find, just to piss me off. I swear, with friends like these it’s no wonder I’m always ranting about nonsense.

Here is a list of 5 of the most ridiculous beers that the world has come up with.

Rogue is a brewery that’s never met a gimmick it wasn’t willing to try, hence the breweries appearance three times on this list. Chili beers have a niche in the market, with Cave Creek Chili Beer being as close to mainstream exposure as the style got. Ballast point made a melt-your-face-off hot Habanero IPA that no one has gotten to taste since their taste buds were napalmed off by the heat. Ballast Point also made a beer called Indra Kunindra, which was a beer with curry, coconut, chili peppers, and it really tasted like those things and was hella good. While Rogue’s Sriracha stout gives just the right amount of heat, it actually tastes nothing like Sriracha, proving that this beers whole identity is nothing but a gimmick.

Rogue teamed up with popular Portland destination, Voodoo Doughnut, and has steadily been releasing a line of beers influenced by the flavor combinations found in Voodoo Doughnuts creations, none of which taste anything like a Voodoo Donut. The flavors are muddled and incoherent and taste nothing in common with beer aside from being wet. Just like with Rogue’s Sriracha beer, a big part of the appeal is the attractively designed, painted bottle. The labels look cool, the gimmick is interesting, but the beers themselves leave a lot to be desired. Some people may enjoy the hodgepodge of flavors going on in each beer, but the main purpose of this line is for publicity first and enjoyment second.

Top Ramen is the undisputed king of struggle food, filling the bellies of broke students and starving musicians alike. Natural Ice and PBR were the drinks of choice when I was a broke and struggling student and musician, but Texas company, The Collective Brewing Project, decided to create a Ramen noodle Gose for fans of the dehydrated meal. The company’s promo sheet brags that each batch of the beer was brewed with 55 lbs. of noodles, along with lime, lemongrass, ginger, coriander, and a seaweed cured sea salt. While those are all great sounding flavors that compliment a Gose, they have nothing to do with the flavors we associate with Ramen soup, like creamed chicken or shrimp. You make a shrimp flavored beer, and boy lemme tell ya what, now were talking Ramen flavored! A user review for the product stated, “A decent Gose that hits all the of the marks but I’m not getting anything that relates to Ramen noodles.”

Who did this? What kind of animal thinks it’s a good idea to throw greasy, salty, fried chicken into a mash kettle with the grain? Apparently, Veil Brewing Co’s marketing team felt the same way, and backpedaled pretty hard while writing the copy for the press release. “We actually put a VERY small amount of fried chicken into the mash (less than 0.4% of the total mash). It doesn’t even remotely taste like chicken”, assures the commercial description of the product. While being touted as a fairly tasty Double IPA, the fact that this brewery can’t even fully get behind the ridiculous gimmick of adding oily meats to a beer, tells you how lame of an idea it really is. It’s too bad the sales team chickened out on their end. Get it? Hey-oo!

If you think these beers are redic, I haven’t even told you about the beer served out of taxidermized squirrels, or the one made from a woman’s vagina. Coming atcha next week with those!