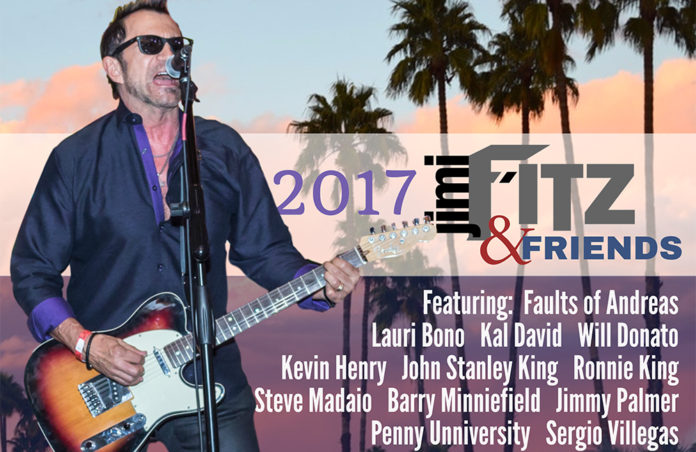 From his globally popular MTV music video for “AUDIO/VIDEO” to talent agent and concert producer who worked with Johnny Cash and Waylon Jennings to television producer who worked with Kenny Rogers, Etta James, The Greg Allman Band and Howard Stern to current beloved radio show host of CV 104.3 FM’s ‘FITZ In The Morning’ to his long-running and well received ‘Fitz’s Jazz Café at the McCallum Series,’ jimi ‘FITZ’ Fitzgerald is clearly the Commander and Chief of the Coachella Valley! He’s also composed original music with notable producers like Ronnie King of Chateau Relaxo Studios (2Pac, Mariah Carey, Snoop Dogg, The Offspring) and Lewis Richards of 17th Street Records (Dirty Heads, Sublime). Now FITZ returns to his CBGB roots as rock and roll front man with FAULTS OF ANDREAS, the new band featuring long time desert players, Jimmy Palmer on guitar, Charlie Ellis on bass and Jeff Bowman on drums. Coachella Valley Weekly sat down with FITZ for a little Q & A.

CVW: FAULTS OF ANDREAS is a kick-ass ensemble of desert musicians! What do you want your fans to know about this killer band & your mission?

FITZ: “Exactly that! They are a killer band and I want the fans to know just how much I enjoy playing with my FAULT brothers. There’s an energy when we come together that I really can’t explain and the love and respect among us certainly adds to the pleasure of making music with talented friends. I hope the mission of any band is to make great music, spread great vibes, have fun, keep growing and build a loyal following; that’s definitely the FOA mission. FOA is its own unique brand of rock music mixing original material with some favorite classic rock. I’m looking forward to our ‘San Andreas Fault Tour’ plans and the FOA EP.”

CVW: How do you feel about each band member?

FITZ: “Jimmy Palmer is a ‘Rock Star’ guitarist on stage and the most respectful down to earth person off-stage. He’s a one of a kind craftsman in his luthier career. He’s spiritual, centered and giving in life and he’s a cherished member of our band. Jeff Bowman is a lyrical, tasty drummer whose power on the skins is mesmerizing to watch. He’s the band’s timekeeper who walks softly and wields big powerful sticks! Charlie Ellis is a positive bright light and so much fun to rehearse and perform with. I can count on him to lay down that perfect bass line and punctuation. Since Jimmy, Jeff and Charlie have all grown up together I feel very special being admitted into their musical club.”

CVW: The big second annual ‘FITZ AND FRIENDS’ show is coming up quickly on November 17th at the McCallum Theatre. How are you feeling about the show and what can we expect different from last year’s event?

FITZ: “I feel exhilarated by what we’re working on for this year’s concert. It’s going to be very different from last year starting with the fact that it’s not a Christmas show. I will be hosting and performing with my friends doing what we all do best and that means a night of rock, blues and jazz. A night when some of the valley’s best musicians will come together like never before doing music they’re known for and some popular covers. Everyone is as energized as I am so this will be a very interactive, collaborative night. It will also be the debut of our new band FOA to the McCallum audience and what a great stage for a debut! It was an amazing feeling for all of us on stage last year to see our local community come together to support this event and bring the love with them. Last year’s response was incredible but I truly believe that this year the audience will feed off the energy on stage even more. That is what we are all hoping to deliver to them on November 17th.”

You have a great album with jimi FITZ. What’s been the response to your newest album No Easy Way Out?

FITZ: “First of all, the song, ‘Go On,’ from my self-titled record, has scored a placement in the movie and soundtrack for the ASG Entertainment motion picture Bordercross starring Lorenzo Lamas and Danny Trejo. It will be released this December. A big shout-out to my music brother and the desert’s own Ronnie King, who is ASG Entertainment’s Music Supervisor, for making the recommendation. The response to my new record No Easy Way Out has been really exciting. The title track seems to be getting its footing and we’re thrilled it’s connecting with so many. We just got featured as ‘Trending New Music’ in the trade publication POP Music 100. Any chart action is always a thrill. I’ll be performing three to four original ‘jimi FITZ’ songs with FOA on the 17th at the McCallum and though we will continue to play some of my material we are also writing new songs together. Musicians create and right now I am performing and creating with FOA. It’s the most fun I’ve had making music in a band since I was a teenager.”

CVW: You continue to revitalize yourself and create a new dimension in your career. Are you conscious of your moves or are you just following your heart? In other words, is there a vision for your career or is there a divine force leading the way?

FITZ: “I am someone who definitely believes there is opportunity all around, you just need to be able to see it; so I look. When I see an opportunity I want to go for it, it’s just who I am. Sometimes it seems to fit perfectly with what is currently on my plate and other times it may be a bit out of the box but it may excite me and I still want to go for it. So is there a divine force leading the way?  Most definitely! And for the past 31 years right beside that divine force has been my wife, WJ Rene, the Virgo, a detailed logical thinker who listens to my heart and helps me plan the vision. I have been blessed with a great partnership and together we get prepared and put in the hard work it takes to get things done. If you asked me what I was going to be when I was 17 I would have replied, ‘a rock star’ and that dream has never died. So although I never dreamed I would wear so many hats in my career, I am extremely grateful that my path has always been firmly placed in the entertainment business, an industry I know and love and one that allows me to still create and perform music.”

CVW: How is it going with 104.3 and your involvement with local artists? To me, it seems that you are on the leading edge of creating a platform for local artists that no one else is doing.

FITZ: “Yes, I am and isn’t it fantastic? CV104.3 is doing great! CV stands for the Coachella Valley and it was always our intent to focus on serving our local community. Just like it used to be when you owned a mom and pop radio station. When it comes to being a radio broadcaster I am blessed beyond words. I actually get to do a real, live, local morning show. Wow! What a breath of fresh air. I truly feel like ‘The Last DJ’ in Tom Petty’s song where I get to say what I want to say and play what I want to play. My intent from the start was to focus much needed attention on our desert charities and showcase world class musicians who call the valley home. Renova Solar stepped up to the plate to sponsor our spotlight on local musicians since they too have a firm commitment to our local community. The owner of the station understands my brand and the connection I have built with my listeners after all these years and he allows me to break format in the mornings and do a show that is relevant to the day. I am so grateful.”

FITZ is undoubtedly in a class by himself. He is meticulous in all that he does and he persistently presents to his audience a magnificent production that has been judiciously formulated. He holds himself accountable and is sincere in his approach to music and those who perform it. After all these years he continues to abide by his self-determination, values and standards. “You ride the wave but you ask any artist who’s been in the limelight. The spotlight comes and the spotlight goes. The name of the game is how do you continue on as a musician with a love of music? How do you carry on for the right reasons and not get caught up in that particular moment in time?” stated FITZ.  You can bet FITZ will continue to live by his words.